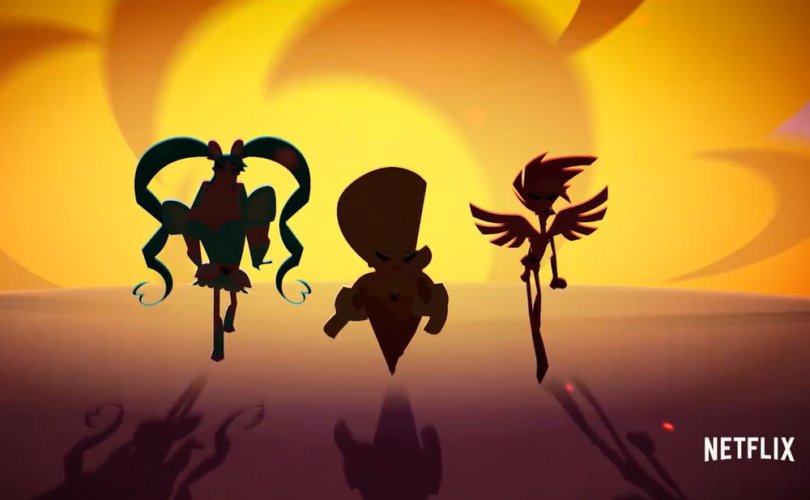 June 11, 2018 (LifeSiteNews) – Netflix has released a brief preview for a cross-dressing themed superhero cartoon. It will debut later this year on the popular streaming platform.

“During the day, they work in a department store and deal with their uptight bitchy boss,” reads the official synopsis for “Super Drags,” the upcoming show. “By night, they tighten up their corsets and transform into the baddest SUPER DRAGS in town, ready to combat shade and rescue the world's glitter from the evil villains. Get ready, because the SUPER DRAGS are going deeper than you think.”

They're here, they're queer, and they're going to save the world. Super Drags, a new animated series coming soon. pic.twitter.com/CscVyanB6B

The 38-second trailer (content advisory for suggestive imagery) offers few details, but depicts the stylized lead characters suiting up, with the camera focusing on their chests and behinds. The only dialogue is a decidedly-male “huh?” coming from a character in a green dress, blonde wig, and heavy eyeliner and lipstick.

“We are thrilled that our first Brazilian animation will present our audiences with the daring, scandalous and fabulous world of Super Drags!” Netflix director of original international content Chris Sanagustin said according to Animation Magazine. “Netflix is fortunate to invest in great animation talent from Brazil, bringing the vibrant trait of Combo and the acidic mood of our producers to the beautiful and the canvases from every corner.”

“Thanks to Netflix we can take the Brazilian animation and mainly the LGBTQ representativeness to the 190 countries that have access to the service,” the show’s executive producer Marcelo Pereira added.

RELATED: Say goodbye to Netflix to protect your mind and soul

In a similar yet more extreme vein, a cartoon called “Drag Tots,” about baby drag queens and featuring the voice of drag icon RuPaul, is in the works for RuPaul’s LGBT streaming service WOW Presents Plus.

There’s no word yet on an age rating or target audience for “Super Drags.” Netflix features a number of adult cartoons such as “Big Mouth,” which has come under fire for featuring graphic depictions of pubescent characters exploring their sexual curiosity.

But while “Big Mouth” and others carry a TV-MA rating, and Netflix’s parental controls allow parents to limit the content their kids can access by rating, the company also promotes vulgar sexual messages via “Bill Nye Saves the World,” which it suggests is acceptable for children as young as middle school via its TV-14 rating.

Regardless of such concerns, pro-LGBT advocates are embracing the cartoon.

“Our bodies are ready” for “Super Drags,” Pride.com’s Taylor Henderson writes. “I am SHAKING,” PopSugar’s Ryan Roschke declares. The trailer “does not give much away,” Nick Duffy of PinkNews says, “but we are hyped.”

The show “looks to combine everything we love in this world,” SyFy channel blogger Courtney Enlow writes. “This is truly a perfect gift to kick off Pride month.”