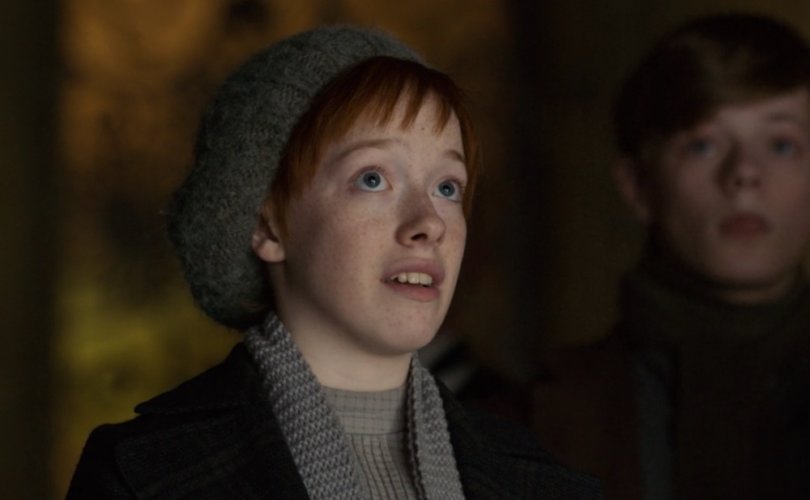 July 17, 2018 (LifeSiteNews) – On the heels of controversy and recent charges of airing child pornography stemming from a graphic scene involving children, Netflix is once again pushing an objectionable agenda with its programming.

In June the Internet media services provider took heat for a scene in the film Desire in which two young girls playing “horse” leads to the older child performing a sex act on herself in front of the other.

Now, Netflix says it has a “new twist” in its treatment of the classic 1908 children’s novel Anne of Green Gables – one that promotes homosexuality.

The series is called Anne with an E, and LifeSiteNews heard from a parent who wanted to warn others about it.

Because the series is packaged with good production, the parent feared it may at first deceive viewers who tune in to thinking it will pay homage to the beloved fictional story of 11-year-old orphan Anne Shirley in late 19th-century rural Prince Edward Island as captured in the book by Canadian author L. M. Montgomery.

The parent had been watching the series with their child, thinking that it was family friendly. While there had been some indication in earlier episodes of a possible agenda, the parent told LifeSiteNews, the cover was pulled fully off in Season 2 Episode 7.

“We endured one of the most insidious, deceitful, emotionally-charged propaganda pieces promoting the homosexual lifestyle,” the parent said.

The episode aimed at creating sympathy for homosexuality by inserting into the plotline the narrative of same-sex attracted individuals as societal outcasts and by putting the pro-homosexual “love is love” mantra in its dialogue.

In the episode, Anne, her best friend, and a young male artist who is bullied attend a “party” at an elderly relative’s home. Full of “artistic types,” the concerned parent recounted, it’s portrayed as a magical experience.

Among the guests spotlighted are homosexuals and cross-dressers, some giving wise advice about hope for the downtrodden who are “different,” because they are more sensitive and special.

Anne realizes that the elderly female and her deceased female companion had been “married” and the bullied artistic boy realizes he is “gay” –  like the elderly woman and her same-sex partner.

Anne’s other friend, who has been raised conservatively, is confused and concerned, having learned about her aunt’s “lifestyle.” But Anne and the artistic boy both reassure her and smile understandingly at one another – sharing this newly-identified vision of the “different.”

The episode wraps up with Anne reaffirming this newly-acquired view to the woman who has adopted her into her home.

“I think I learned some things about love, too,” Anne states to Marilla Cuthbert. “It doesn’t look the same for everyone. It can come in so many forms. And how can there be anything wrong with a life if it’s spent with a person you love?”

“I’m surprised they did not waive the rainbow flag,” the concerned parent told LifeSiteNews, “as they waived every other emotive pro-gay stereotype from our time.”

The series is produced in Canada under the title Anne. It premiered on CBC in March 2017, and aired seven episodes weekly through April of last year. The show debuted on Netflix in May 2017 under the title Anne with an E. Both CBC and Netflix renewed the series for a 10-episode season last August, which premiered July 6 on Netflix. The season 2 premiere is set for CBC in September.

The promo text for Season 2 Episode 7 states, “Cole accompanies the girls to Aunt Josephine’s for a lavish party filled with surprises.”

Walley-Beckett discussed her reimagining of the Aunt Jo character in an Indie-Wire interview published July 15.

She had put the character in a “Boston marriage” with her same-sex partner, which referred to the cohabitation of two women independent of financial support from a man, the question of any sexual relationship left to speculation.

This is touched on in the first season, Walley-Beckett explained, and expanded upon in season 2, allowing the Aunt Jo character “to provide a forum of acceptance and safe haven for [bullied artist] Cole and the other people in her community.”

She confirmed the party Aunt Jo throws in Season 2 Episode 7 is a “queer soiree.”

“It was very exciting for me and the writers to create that. We’ve been talking about the queer soirée, which is how we refer to it, since we all first sat down together,” Walley-Beckett said. “It was just like, ‘Wouldn’t it be amazing to get the kids to Charlottetown to see Aunt Jo and have her reboot her annual mid-winter queer soirée?’”

Walley-Beckett went on to explain that in addition to the Cole character – gay because, “it would only make sense that there would be somebody in the class who was struggling with identity” – that, “also, in my mind their teacher Mr. Phillips has always been an unidentified closeted homosexual.”

In Netflix’s case it had said it would move production from Georgia if the state passed HB 757. The bill would have protected clergy and others from being forced to participate in or otherwise condone so-called homosexual “marriages.”

Last year some Bill Nye Saves the World episodes on Netflix pushed transgenderism, in one instance with vulgar, explicit song lyrics. Netflix censored a 1996 program of Nye’s that had explained the scientific facts that determine gender.

Nye also floated the idea of punishing people in the developed world who had “extra kids” last year while promoting population control on his Netflix series.

The Netflix cartoon Bigmouth has been criticized for normalizing pedophilia.

The Netflix series 13 Reasons Why, a teen soap opera that initially centered on teen suicide, is criticized for actually encouraging suicide.

As reports continue to emerge about problematic programming on Netflix, the parent who contacted LifeSite about Anne with an E expressed disappointment and sadness for what the network is doing to Anne of Green Gables author L.M. Montgomery’s legacy, and for what this means to other families.

“I feel so sad for the hundreds of parents who are recommending the series to their children based on the content of the original work,” the parent said.

“I feel most upset about the sweet, artistic, and crafty way this bit of disguised poison is enticing souls into delusion,” the parent added. “Emotively targeting women and children is using their positive emotions against them.”

To respectfully express concerns to Netflix: