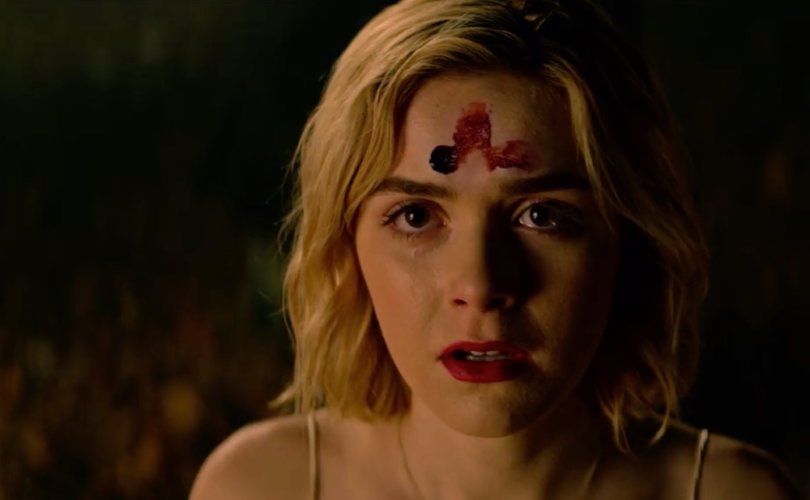 “What is being [brought] here to our audience is absolutely immoral,” said David Zachalski on YouTube. “This can lead anybody to cheating, unwanted pregnancy, abortion, same-sex attraction … I will pray for you, brothers and sisters.”

Some parents might remember the character of Sabrina Spellman from the late-1990s television show Sabrina the Teenage Witch.

Older parents might remember the Sabrina the teenage witch character of the Archie comic books in the 1960s. She was a blonde, girl-next-door type who just happened to be able to cast spells and do a little magic. (In earlier adaptations, Sabrina's abilities were “typically depicted as being morally-neutral, like double-jointed knees,” Paul Asay wrote at PluggedIn.)

This new TV show isn't that.

“This is buried in what viewers think is a feel-good, kids' TV show from back in the 1990s,” he said. “They took family entertainment and made it so dark.”

Magic and supernatural-powered characters are certainly not new in the world of Hollywood – as witnessed by Buffy the Vampire Slayer and the Harry Potter series – but most of those fantasy heroes and heroines ostensibly used their power to do good, said Gainor.

In The Chilling Adventures of Sabrina, the main character's magic seems to be designed to be in the service of the evil “Dark Lord.”

Beth Broderick, the actress who played Sabrina's aunt Zelda in the 1990s version, says the character of Sabrina would never have been allowed to act then as she does now.

“We would never have allowed Sabrina to behave that way,” said Broderick. “It's very dark. It's very different.”

Melissa Joan Hart, the actress who portrayed Sabrina in the earlier show, has gone so far as to say she would not let her own children watch The Chilling Adventures of Sabrina.

While many on social media point out the Sabrina reboot is not meant to be a children's TV show, it's clear at least some young children are watching it. And it's only rated TV-14, meaning “contains some material that many parents would find unsuitable for children under 14 years of age.”

At the Media Research Center, Gainor advises conservative and Christian parents to keep an eye on these shows and then explain to their children the ways in which their values and faith are being attacked on these programs.

Opting out of TV and movies just isn't realistic, he says.

“You can't function in our society as a Christian or conservative and ignore the media,” said Gainor. “Even if you check out, your kids won't. I tell Christian parents to stay engaged.”

Television has a big impact on what people perceive as real. The Media Research Center's NewsBusters website reveals just how much of an impact the medium has already had on young Americans.

Four years ago, the organization reported on the then-recent National Health Interview Survey (NHIS) which showed that less than three percent of the population of the United States identified as gay, lesbian, or bisexual.

“Everyone knows there are gays and lesbians in everybody’s family,” wrote Kristine Marsh. “And no office would be complete without a sassy gay character. And just about every other kid in high school is wrestling with his sexuality. I know. I watch TV.”

“Except it isn’t true …The NHIS study found that, while 96.6 percent of adults identified as 'straight,' 1.6 percent identified as gay or lesbian, and 0.7 percent called themselves bisexual. 1.1 percent responded 'I don’t know' or said they were 'something else' not listed.”

“Maybe that’s because gay characters pop up in just about every product out of Hollywood. Men dress as women, give lap dances to other men and even get married in national awards shows like the Grammys and Tony Awards,” she wrote. “Media festivals like South by Southwest and Sundance celebrate gay sex and all other kinds of relationships as completely normal. TV shows like 'Modern Family,' 'The New Normal' and 'The Fosters' attempt to show that gay families are just as common and normal as any other family.”

The trend towards more and more depictions of LGBT sex acts and the normalization of that sexuality as well as a growing number of occult and Wiccan practices in movies and television is something Gainor believes is part of a leftist agenda.

“The left does not want equality,” he said. “They want to put up their own stuff, mock Christianity, and celebrate Wicca.”