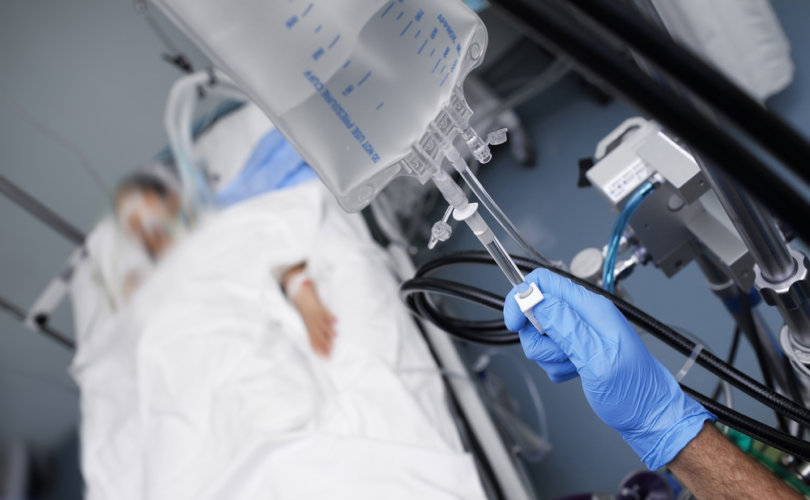 (LifeSiteNews) — Never before have so many people obtained legal euthanasia in the Netherlands as in 2021. No fewer than 7,666 patients were killed on demand, representing an increase of over 10 percent compared to 2020. Last year, 4.5 percent of all deaths in the country (170,839) were due to euthanasia, according to the latest yearly report of the Regional Euthanasia Review Boards (RTE) — this proportion is also on the rise. In 2020, it was 4.1 percent.

The report was presented to the Netherlands Lower House on Thursday afternoon, and once again, the overwhelming majority of declared euthanasia acts that the regional boards systematically vet were deemed to meet the “strict” conditions set by the Dutch euthanasia law. Only seven instances of incorrect handling were identified and these will not give rise to prosecution.

These failures to comply with all the criteria were mostly related to insufficient “independence” of the external expert required to give an opinion before the act, or technicalities such as improper solving of difficulties regarding the euthanasia act itself, such as a doctor leaving the patient’s room to fetch an extra needle for the death jab.

The Netherlands was the first country in the world to legalize euthanasia, and the law entered into effect twenty years ago on April 1, 2002.

Euthanasia remains a crime under the law, but doctors obtain immunity regarding criminal proceedings if a series of criteria are met. Each time a euthanasia is performed by a physician, he or she must notify the event to the regional board and demonstrate that the legal criteria were indeed complied with. In some cases, doctors are required to give further information or undergo investigation on the part of the RTE.

It should be noted that the legal criteria have already evolved since the law came into effect; for instance, extra guidelines for euthanasia because of psychiatric complaints were set up in 2018. The new Euthanasia Code set up that year is in the process of completion and relies heavily on “case-law”: an assessment of actual euthanasia practice over the years. Its aim is also to prevent doctors from falling “victim” to divergent opinions of the many authorities who oversee euthanasia.

This is generally attributed to the fact that a doctor faced prosecution in 2017 for an “uncareful” euthanasia, creating “insecurity” within the medical profession. That doctor was later acquitted, and the number of deliberate killings on demand rose again in 2020, reaching a total of nearly 7,000. Another explanation given by the Nivel Institute, which investigated the dip, is that the relatively high number of influenza deaths may have nipped euthanasia requests and plans in the bud.

Analysts from the NTE do note, however, that the 2021 increase is especially remarkable because a relatively large number of elderly people died from (or with?) COVID in 2021. COVID patients almost never asked for euthanasia, according to the official numbers: RTE said that only in a handful of cases did the disease weigh in along with other serious illness.

According to the new chairman of the Regional Euthanasia Review Boards, Jeroen Recourt, COVID restrictions and the difficulties that came with them (such as old and sick people not being allowed to receive visits) did not make seriously ill patients more likely to choose euthanasia.

“I don’t get that impression from the hundreds of cases I handled myself. In them I did sometimes read that the COVID time was unpleasant, and that people were unable to see their children. But that was not the reason for euthanasia. Loneliness should never be the reason,” he said

Recourt added that he expected such an increase because it has become the norm over the last years: “It has continued in the first months of 2022.” Asked whether the way people look at euthanasia has evolved, he said: “That people should choose to have control over their own death is part of an individualized society. That is bound to be a factor.”

Brushing aside the issue of proper palliative care for people who suffer from painful and uncurable illnesses, he added: “Although we see no evidence for this, we must rule out that the increase is partly because alternatives are not readily available. This would be for example because care in the terminal phase would not be well organized or because the nursing homes would be terrible. However, individual considerations can exist, such as not wanting to go to a nursing home.”

Another factor in the steady rise of planned deaths is that doctors who for some reason — conscientious objection, or unwillingness to perform euthanasia on a particular person — do not want to accede to a patient’s request are increasingly referring him or her to a more accommodating colleague.

There is also a growing number of elderly people in the Netherlands.

Also, more and more people are dying of cancer rather than of cardiovascular disease, and cancer has always represented the lion’s share of reasons for euthanasia requests. Once again in 2021, over half of patients who were euthanized were suffering from cancer.

The ongoing fourth assessment of the Dutch euthanasia law is expected to go into the reasons for the unprecedented increase; its report is expected to be handed to Parliament next year.

Recourt made no mystery of his personal dedication to euthanasia, stating in his personal introduction to the report that in his first year at the head of RTE, he was “particularly impressed by the courage of both patient and doctor in ending the patient’s life together with integrity, thus putting an end to unbearable and hopeless suffering.”

A closer look at the statistics shows that access to euthanasia has in fact become easier in the Netherlands as reasons are more widely accepted. Being in a terminal phase of illness is not required. A combination of complaints (this involved 1,053 people last year) is acceptable, as is a pile-up of age-related conditions such as blindness, osteoporosis and “loss of autonomy.”

In one case, an elderly lady who suffered from alopecia since youth was deemed eligible for euthanasia because she became incapable of looking after her wig and suffered because care-givers could see that she was bald.

Dementia (215) and psychiatric complaints (115) represent only a fraction of the total, but their share is “growing slightly” according to official numbers.

These are particularly chilling because they involve people who are not close to death and who choose to “step out of life” because of deep unhappiness and despair.

Dementia cases lead to killings while people are still capable of making decisions and fear the state they will be in when their degenerative disease takes over: being in a home, not being able to decide for themselves, the humiliation of losing one’s talents and capacities are frequently evoked. 209 of the dementia-related acts of euthanasia were performed at a time when the patients could ask for it themselves.

In six cases, they were killed based on a request they had previously put in writing, either because their children considered the time had come or because their house doctor judged that the situation had reached the point beyond which they had indicated that they did not want to go. Even if in these cases special attention is given to an independent medical expert, the fact remains that an appearance of “sadness” or agitation will help sending these patients to the other world.

Most (89 percent) of the 7,666 euthanasia cases registered last year involved people older than 60. Only one minor was euthanized: a teenage boy in the 16-18 age group who suffered from an “untreatable, aggressive brain tumor.”

An increasing number of euthanasia acts are now being accompanied and performed by the “EE,” the “Expertise Center for Euthanasia” formerly known as the End of Life Clinic (“Stichting Levenseindekliniek”). 1,123 reports came from doctors active in this association, over 200 more than in 2020.

EE physicians are often called in when the physician involved in treating a patient perceives the euthanasia request as too complicated. Physicians who do not perform euthanasia for reasons of principle or physicians who only want to provide euthanasia in the case of a terminal illness also regularly refer patients to EE. In addition to referrals from an attending physician, it also happens that the patient himself or, at his request, his family makes contact with EE. A large proportion of the reports involving a psychiatric condition came from an EE doctor: 83 of the 115 reports (over 72 percent). Of the reports where the basis of the suffering resulted from a form of dementia, 99 of 215 reports (46.0 percent) were from an EE physician. Further, 158 of the 307 reports (51.4 percent) involving an accumulation of aging disorders were from EE physicians.

Clearly, the “Expertise Center” is a driving force in making euthanasia more commonplace.

Finally, in 32 reports, two partners (16 couples) were euthanized at the same time. In these cases, each person must be visited by a different counselor to make sure the cases are independently assessed and no pressure is being exerted.

The Dutch press, which is wont to report euthanasia as a “good” and “beautiful” event, is even more enthusiastic about these almost “romantic” departures from life of aged couples.