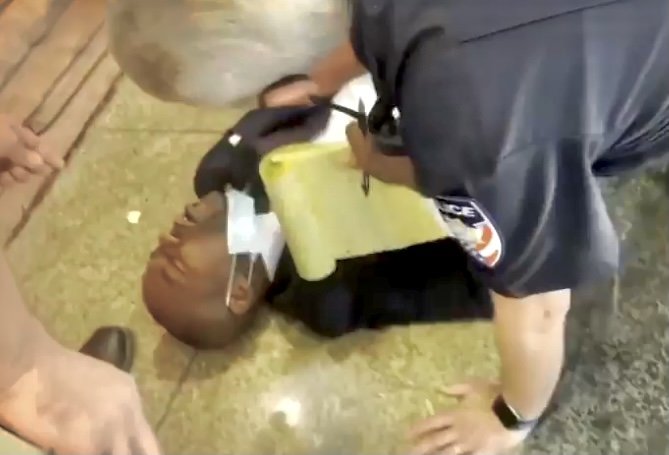 LAS VEGAS (LifeSiteNews) — Nevada lieutenant governor hopeful Mack Miller was manhandled and shoved to the ground by security guards while protesting Tuesday on behalf of Nevada citizens’ freedom of speech.

The aggressive treatment of the Republican candidate occurred when Miller joined protesters in expressing displeasure with the Clark County Board of Commissioners for considering a resolution declaring that “misinformation” about COVID-19 is a “public health crisis.”

Cell phone videos circulating widely on social media show Miller being pushed and restrained by security guards, who then forcibly ousted him from the room and shoved him into a metal detector that nearly toppled.

Anybody shocked by this video? 🙄pic.twitter.com/6OSRnHoGBr

Bystanders appeared to call 9-1-1 after Miller was pushed to the ground, landing on his back.

Miller, who Newsweek reported “ran unsuccessfully as a Republican for the Nevada state assembly in 2018 and for mayor of Las Vegas in 2019,” is now running for lieutenant governor in 2022.

Before being physically thrown out of the meeting, Miller began filming the unfolding incidents with his own phone. In a video posted to YouTube, he is heard saying the security guards had been “shoving and pushing” other people.

Miller appeared to interject himself into an altercation between security guards and several women, which is when the incident escalated.

The clip shows guards begin to approach Miller, touching his shoulder and then becoming increasingly aggressive after the candidate failed to immediately leave the premises.

Just before being grabbed by guards and ultimately thrown to the ground, Miller can be heard saying, “Hey, hey, wait a minute. What the hell?”

After Miller was pushed into the metal detector and shoved to the ground, bystanders can be heard in the video saying, “Don’t hurt him, don’t hurt him,” and asking, “What are you doing?”

The confrontation occurred during a break between meetings, in which Miller joined protesters in objecting to a resolution being considered by the county to treat coronavirus “misinformation” as a threat to public health.

During the break, many protesters became upset, arguing that the resolution was a violation of the first amendment while calling the board members “commies” and telling them to “resign.”

According to Clark County spokesman Erik Pappa, security guards decided to shut down public access when “some attendees” became “disruptive” and “boisterous” after a guard told someone to put on a mask.

“During a break in the meetings, a group of attendees became disruptive after one of them was asked by security officers to put on his face mask, in keeping with COVID-19 protocols. Numerous persons became boisterous and it became necessary to clear the room,” Pappa told Fox News on Wednesday.

After the incident, order was reportedly restored and attendees were allowed back inside the meeting room.

The resolution to treat “misinformation” as a “public health crisis” was formally adopted in a 5-2 vote.

According to a county news release, the resolution was implemented “following a discussion about how misinformation surrounding the effectiveness and safety of vaccines, masks, social distancing and other measures recommended by health officials to stop the spread COVID-19 have caused confusion in the public and created divisions in the community.”

As reported by a FOX5 affiliate station based in Las Vegas, the controversial resolution had been requested by Commissioner Justin Jones and adopted Tuesday.

Jones claimed that “COVID-19 has had a devastating impact on our economy, our children’s education, and the health and safety of our community, and the spread of false and misleading information has only made matters worse.”

🚨 BREAKING: Clark County becomes one of the few counties in the nation to declare that COVID-19 misinformation is causing a public health crisis in our community. pic.twitter.com/aQVadSz8Vv

“It’s important for our governing board to declare health misinformation as a public health crisis and commit to doing all we can to combat the falsehoods that continue to jeopardize the lives of our citizens,” he argued.

While it is unclear what specific actions the county will take to tackle “health misinformation,” the powers that government entities have taken to themselves in response to alleged “public health crises” have been far-reaching throughout the course of the coronavirus pandemic.

Using language made familiar by the COVID-19 narrative promulgated since March 2020, the Clark County Board said it plans to “curb the spread of falsehoods.”

According to the language of the resolution, “It is hereby resolved that it is the sense of the Board of County Commissioners that health misinformation is declared a public health crisis and Clark County should commit to combating health misinformation and curb the spread of falsehoods that threaten the health and safety of our residents.”

It is unclear what information the board considers “misinformation,” or which sources it considers legitimate or illegitimate.

The board’s resolution also failed to indicate whether any penalties will be levied against those who spread information contrary to the accepted COVID narrative.

To date, it has not been reported whether Miller sustained any injuries or plans to pursue legal action against the security guards who wrangled with him during the commissioners’ meeting.

Pappa said Tuesday that the matter involving Miller was under review.