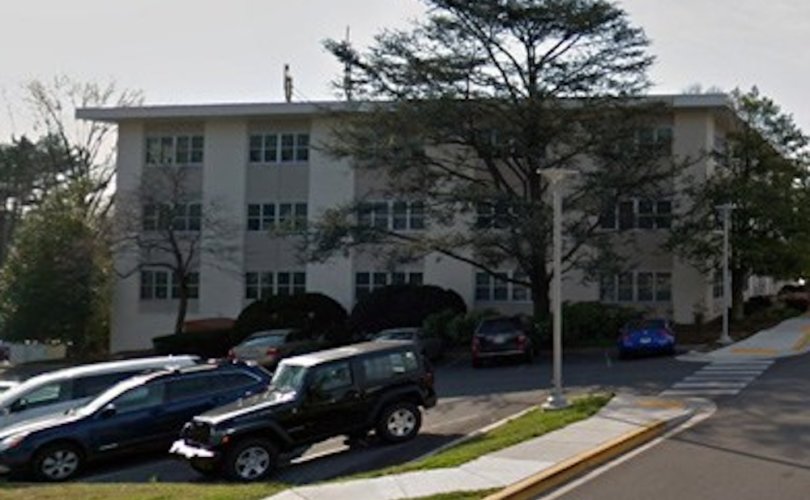 A late-term abortion center will open at this location next week in Bethesda, Maryland.Operation Rescue

That means any abortions he plans to do beginning October 17 would be illegal.

Since Operation Rescue released the address of Carhart’s secret new abortion facility yesterday, the AbortionClinics.org web site has been changed to show a location in Bethesda, Maryland, along with an announcement that it would be “Offering advanced gestation abortion care in Maryland Starting Tuesday, October 17th!”

“There is no way Carhart could get the Bethesda location licensed by next Tuesday. It looks like he thought he could sneak some abortions in under the radar without having to comply with licensing laws,” said Troy Newman, president of Operation Rescue. “This is just another example of how much disregard Carhart has for the law and for the safety of his patients.”

“We trust that any effort to open that Bethesda facility without a valid license will be met with swift action on the part of Maryland authorities, who are already aware of the situation,” said Newman.

Meanwhile, local and national pro-life leaders plan to hold a press conference outside the illegal Bethesda abortion office on October 17 to announce further plans to oppose the dangerous new facility. Details to follow.

Carhart was forced to relocate after the Maryland Coalition for Life bought and closed Germantown Reproductive Health Services in Germantown, Maryland, where he previously worked as an independent contractor.

During the nearly seven years Carhart conducted late-term abortions in Germantown, at least 10 women were rushed to hospital emergency rooms by ambulance suffering from life-threatening complications to the risky abortion procedures. One woman, Jennifer Morbelli, died from complications to a 33-week abortion.

Carhart has no admitting privileges at any hospital, and hasn’t since 1982.

“We want to warn the public of the dangers women face during abortions done by Carhart, and encourage pro-life activists to maintain a vigil outside this new late-term abortion facility,” said Newman.

The opening of this new late-term abortion facility provides new urgency for the Pain Capable Unborn Child Protection Act that now languishes in the U.S. Senate. This legislation, if passed, would protect pre-born babies at 20 weeks' gestation and later, which are specifically targeted for abortion by Carhart’s Maryland abortion business. If passed, it’s doubtful if Carhart will be able to stay in business in Maryland, since the later abortions are expensive and highly profitable.