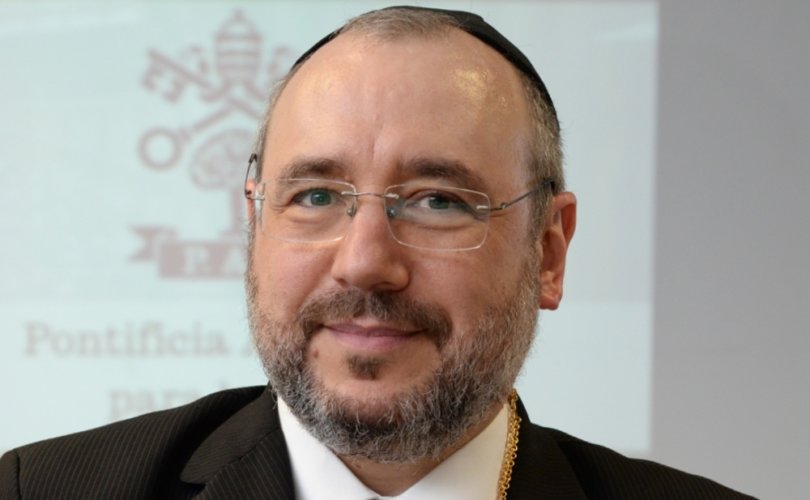 ROME, February 12, 2018 (LifeSiteNews) —  A recently appointed member of the Pontifical Academy for Life has argued that scripture justifies abortion in certain rare cases, a position diametrically opposed to the teaching of the Catholic Church.

In a predominantly pro-life article published on the Argentine site InfoBae on Feb. 11, Rabbi Dr. Fishel Szlajen denounced abortion on demand, describing it as a crime that has been turned into a right. “‘The right to decide what to do with one’s own body’” manipulates and intentionally obscures the fact that we are dealing with “two distinct humans,” he said.

But Rabbi Szlajen also claimed there is one case when scripture calls for abortion.

“In only one case does the Bible call for abortion: when the life of the conceptus [the unborn child] inexorably threatens that of its mother,” the rabbi said. He added that in such cases the life of the mother takes priority.

Rabbi Szlajen based his argument on the Jewish law of the “rodef,” which he said allows people in certain circumstances to kill someone who is endangering the lives of others, “even when he is not aware of it.”

Some Jewish scholars have suggested that various public figures could qualify as rodfim. The most notorious example is that of Israeli Prime Minister Yitzhak Rabin who was assassinated in 1995 for concessions made to the Palestinian Authority in the Oslo Accord. The assassin, Yigal Amir, justified his actions partly on the basis of din rodef, under the assumption that making concessions to the Palestinian Authority would endanger Jewish lives.

Cases of anencephaly, irreversible degenerative pathologies, and terminal disease in which the conceptus will certainly die are examples of ‘tzorech gadol’ (grave necessity) where “abortion is permitted with severe restrictions in time and form,” Rabbi Szlajen said.

Similar criteria would apply to pregnant women in cases of rape, when continuing the pregnancy would put them at “serious psychophysical risk,” he added. “However, these cases are quantitatively insignificant compared to the 56 million annual induced abortions in the world, the majority of which are unwanted pregnancies because they conflict with personal, family or social interests,” he said.

This latter argument was used to pass the Abortion Act 1967 in the UK.

Speaking to the Catholic Herald, where the story originally appeared, Rabbi Szlajen said that these exceptions were “peripheral” to the main thrust of his article, which “centrally deals with the absolute prohibition of abortion on demand from the Bible, and the refutation of the arguments that are used for decriminalizing it.”

He stressed, in fact, that his article was part of a “huge effort” to resist the attempts to introduce abortion on demand in Argentina.

He also explained that according to Jewish thought, “the zygote is an actual living human being (and not a potential one), and all maturational changes are phenotypic but not genotypic ones.” Only in “exceptional cases,” when there is an “imminent threat of death from one human being to another,” does Jewish law permit abortion, he said.

He was one of two rabbis appointed by Pope Francis to the Pontifical Academy for Life in June 2017. It is the first time rabbis have been invited to be members of the academy.

Rabbi Fishel Szlajen is not the only new member of the Pontifical Academy to believe abortion is permissible in certain circumstances. According to The Catholic Herald, Rabbi Avraham Steinberg, who was appointed to the academy in 2017, has said the unborn child has “no human status” before 40 days. After 40 days, he argues, an unborn child has “a certain status of a human being, not full status.”

The only UK-based member of the academy, Anglican clergyman and moral theologian, Nigel Biggar, has also in the past supported legalized abortion up to 18 weeks.

According to The Catholic Herald, Biggar said in 2011 it is “not clear that a human fetus is the same kind of thing as an adult or a mature human being, and therefore deserves quite the same treatment.”

“It then becomes a question of where we draw the line, and there is no absolutely cogent reason for drawing it in one place over another,” he said.

Biggar, who teaches moral and pastoral theology at the University of Oxford, said: “I would be inclined to draw the line for abortion at 18 weeks after conception, which is roughly about the earliest time when there is some evidence of brain activity, and therefore of consciousness.”

Rabbi Szlajen’s claim that scripture allows for abortion in certain rare cases is the latest in a pattern of public statements from new Vatican-appointed members of the Pontifical Academy for Life that are raising considerable concern.

As LifeSiteNews first reported in early January, Italian moral theologian, Fr. Maurizio Chiodi, has argued on the basis of Pope Francis’ apostolic exhortation on the family, Amoris Laetitia, that there are circumstances that not only allow but even “require” married couples to use artificial contraception.

His comments were made on Dec. 14, 2017, during a public lecture sponsored by the department of moral theology at the Pontifical Gregorian University in Rome. Fr. Chiodi’s talk was later prominently featured and praised in the Italian bishops’ official newspaper, Avvenire.

In late January, the National Catholic Register also reported that another new member, German moral theologian Gerhard Höver, proposed in a reflection on Amoris Laetitia posted on the Academy’s website, that the term “intrinsically evil” is too restricting, as it fails to account for the complexity of different situations.

Jesuit Father Alain Thomasset, also a new member of the academy since last year, has said he does not believe in the existence of the term.

Founded in 1994 by St. John Paul II, the Pontifical Academy for Life is charged with defending and promoting “the value of human life and the dignity of the person.”

In the past, new members had to sign a declaration of fidelity to the Church’s pro-life teachings, but new statutes implemented last year ended that requirement.

In an interview last year with the National Catholic Register, Archbishop Vincenzo Paglia, president of the Pontifical Academy for Life, offered reassurances that the new statutes “require a stronger commitment on the part of members to the Church’s pro-life teaching” and that they “promote and defend the principles of the value of life and the dignity of the person, interpreted in conformity with the magisterium of the Church.”

But last summer the archbishop oversaw the selection of new members, including Rabbis Szlajen and Steinberg, Nigel Biggar, Prof. Höver, Fr Chiodi and Fr Thomasset, who clearly have differences with the Church’s teaching on marriage and family life.

Asked if the academy’s leaders were aware of their views before they were selected, the spokesman told the Register “we knew” but added that it was important to provide them “space,” in continuity with “Pope Francis’ preference for dialogue and debate with those holding differing opinions.”

2270 Human life must be respected and protected absolutely from the moment of conception. From the first moment of his existence, a human being must be recognized as having the rights of a person – among which is the inviolable right of every innocent being to life.(Cf. CDF, Donum vitae I,1.)

My frame was not hidden from you, when I was being made in secret, intricately wrought in the depths of the earth. (Ps 139:15.)

2271 Since the first century the Church has affirmed the moral evil of every procured abortion. This teaching has not changed and remains unchangeable. Direct abortion, that is to say, abortion willed either as an end or a means, is gravely contrary to the moral law:

You shall not kill the embryo by abortion and shall not cause the newborn to perish. (Didache 2,2)

God, the Lord of life, has entrusted to men the noble mission of safeguarding life, and men must carry it out in a manner worthy of themselves. Life must be protected with the utmost care from the moment of conception: abortion and infanticide are abominable crimes. (GS 51 § 3.)