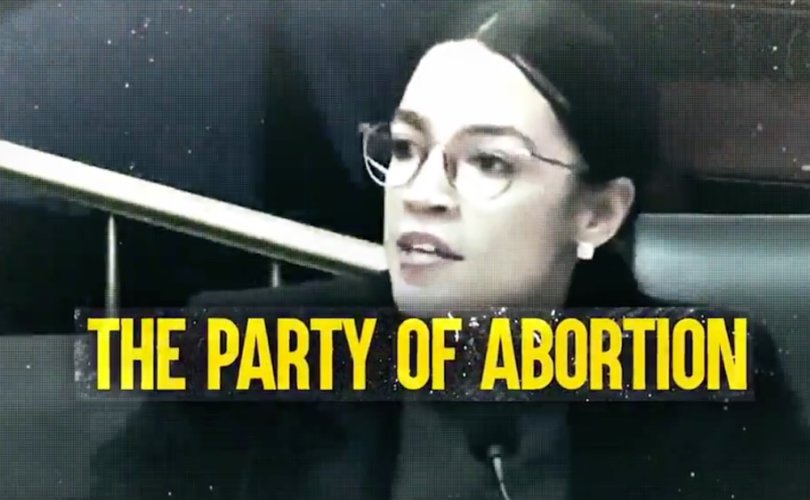 WASHINGTON, D.C., January 23, 2020 (LifeSiteNews) – On the eve of the 2020 March for Life, the super PAC of the pro-life political group the Susan B. Anthony (SBA) List released a searing ad highlighting the Democrat party’s abortion extremism and President Donald Trump’s pro-life record.

The ad praises Trump, who tomorrow will be the first U.S. president ever to attend the March for Life, as “the most pro-life president in history.”

Who will you choose in November?

President @realDonaldTrump, the most pro-life president in history?…

…or the party of DEATH?

The ad describes Democrats as the “party of abortion” and says they have become “more extreme than ever.” It features clips of the current front runners for the Democrat presidential nomination and Rep. Alexandra Ocasio-Cortez (D-NY) saying Democrats must “take back the presidency and pack the Supreme Court.”

Mallory Quigley, national spokeswoman for SBA List, pointed out that “every last Democrat candidate for president supports abortion on demand, up until the moment of birth, paid for by taxpayers.”

Quigley argues that the pro-abortion policies of the potential Democrat nominees won’t help their chances of becoming president. “They want to end the longstanding, bipartisan Hyde Amendment and oppose compassionate measures to protect babies born-alive after failed abortions,” Quigley said. “Their abortion radicalism isn’t only reprehensible, [it] is a major liability for them at the ballot box.”

“Through Election Day, our team will work to expose Democrats’ support for extreme pro-abortion policies. Our focused, battle-tested voter outreach method will ensure we reach the voters who can provide President Trump and pro-life Senate candidates the winning margin on Election Day.”

The new ad is part of a wide ranging 2020 campaign including door-to-door canvassing, voter contact mail, phone calls, and digital ads. The SBA List reports that their canvassers will make four million visits to voters overall before Election Day in crucial battleground states.

The ad comes from SBA List’s Women Speak Out PAC. SBA List, the political powerhouse of the pro-life movement, is spending over $52 million to re-elect Trump and pro-life senators.