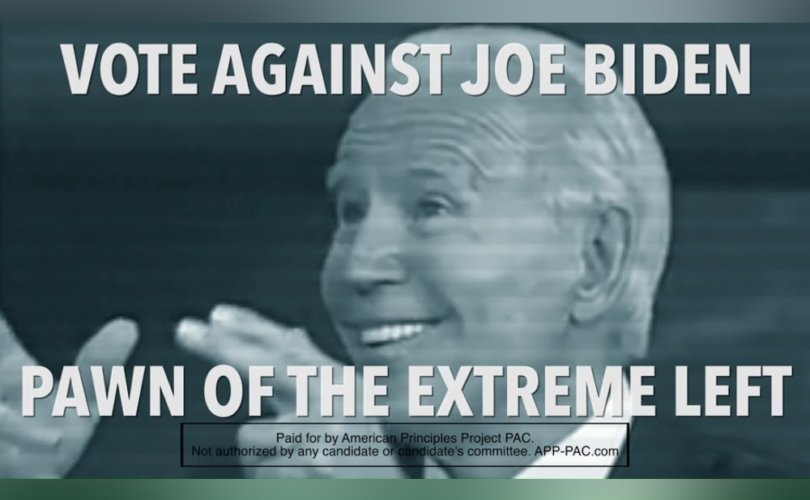 October 21, 2020 (LifeSiteNews) – A new ad from the American Principles Project PAC slams former vice president Joe Biden for his recent endorsement of transgender treatments for kids as young as eight. “Should eight-year-olds really be subjected to dangerous, life-altering medical procedures?” the ad asks.

The ad comes in the wake of Joe Biden’s comments at a town hall:

The idea that an eight-year-old child, or a ten-year-old child, decides, you know, “I decided I want to be transgender, that’s what I think I’d like to be, it’d make my life a lot easier.” There should be zero discrimination … I promise you, there is no reason to suggest that there should be any right denied your [transgender] daughter [sic]… that your other daughter has a right to be and do.

The comments came in response to a question posed by Mieke Haeck, who introduced herself as having two “daughters,” an 8–year–old and a 10–year–old. The younger of the two is transgender and therefore is not actually her daughter, but her son.

Frank Cannon, the president of APP, responded to Biden’s comments on October 15, saying, “In Joe Biden’s view, a child too young to go see an Avengers film can decide to have his or her body permanently altered through surgery and chemical injections. Second or third graders are too young to comprehend the basics of human sexuality, let alone make such irreversible decisions. To mutilate children in such a way is a form of child abuse, and Americans, by a huge margin, don’t believe children this young should undergo such procedures.”

The APP PAC ad urging Americans to vote against Biden points out that transgender surgeries, puberty-blocking drugs, and hormones cause permanent damage. The ad then asks, “If Joe Biden is willing to endorse sex changes for second graders, what won’t he support?”