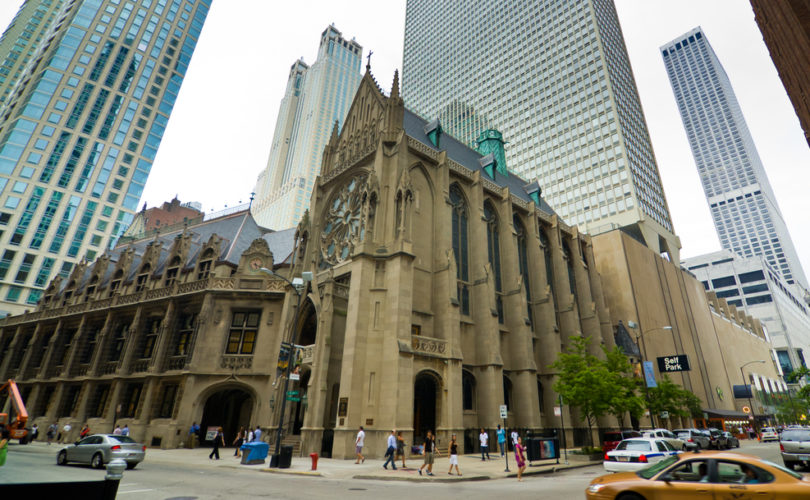 Pope Francis announced Saturday that he is appointing as archbishop of Chicago a prelate best known in pro-life circles as the man who ordered his priests in 2011 not to participate in local 40 Days for Life prayer vigils. The media and Church watchers describe him as “progressive,” “inclusive,” and “left-of-center.”

The appointment of Bishop Blase Cupich, current head of the Spokane diocese in Washington, to America’s third most prominent see – an appointment which Vatican watchers predicted would signal the pope’s priorities for the direction of the U.S. Church – has been widely praised by liberal Catholics and opponents of Church teaching but met with concern by many Catholic activists.

The archbishop-elect gave a sense of his approach to the U.S. “culture war” in an interview Sunday with Chicago’s CBS affiliate, in which he suggested he would be open to giving Communion to pro-abortion Catholic politicians and a person wearing a button in favour of same-sex “marriage.”

“As long as they’re in church, are willing to hear the word of God, be open to Christ’s call of conversion for each one of us, then I think that that’s sufficient for me,” he said. “We cannot politicize the Communion rail and I just don’t think that that works in the long run.”

Cupich will replace the ailing Cardinal Francis George, known in the US as a “Ratzingerian” for his strong defense of Catholic orthodoxy, particularly on issues of sexual morality, but who is suffering from cancer and is overdue for retirement at age 77. The archbishop of Chicago is also normally granted the “red hat” and made a cardinal, which would make Cupich eligible to vote in upcoming papal conclaves. Cupich is scheduled to be installed in Chicago November 18.

The Chicago appointment mirrors that of another outside the US in recent weeks. Rome announced August 28 that Carlos Osoro Sierra, 69, will be installed as the new archbishop of Madrid, Spain’s capital city and largest archdiocese. But the story in Madrid has less to do with the new appointee and more to do with the would-be appointee who was demoted.

Until just before the appointment, most Vatican watchers expected the prominent post to be given to 68-year-old Vatican Cardinal Antonio Cañizares Llovera, dubbed the “little Ratzinger” for his orthodoxy in line with Pope Benedict XVI.  When LifeSiteNews interviewed Cardinal Cañizares in 2009 at the time of his appointment as prefect of the Vatican’s Congregation for Divine Worship and Discipline of the Sacraments, he noted that denying communion to pro-abortion politicians was a charitable act.

Leaving his Vatican post, he was considered a natural for the Madrid spot. But instead it went to the archbishop of Valencia, and Cañizares is to fill that vacancy instead.

The former archbishop of Valencia is known for his strong “liberal” leanings and he will be replacing Cardinal Antonio Maria Rouco Varela, 78, who, like Cañizares, is also known for following the lead of the retired Pope Benedict XVI.

El Pais wrote of the new appointee that Catholics of the Madrid archdiocese, accustomed to the “hieratic” Varela, will be seeing “an entirely different model.”

“Shortly after the announcement of his appointment, the most repeated words to define his figure were ‘dialogue’ and ‘moderation.’”

“During the 12 years he has been the head of the Catholic Church [in Madrid], Rouco Varela has too often mixed faith and politics, with an overdose of intransigence. Defending the (exclusively traditional) family and attacking laws that recognize the right of women to abortion are the main workhorses.”

Catholic News Agency’s Vatican-watcher, Andrea Gagliarducci, wrote that the appointment marks a “new course for Spain’s bishops.” He is described in the Spanish press as “affable,” “friendly,” and “extremely gregarious.”

As for Cupich, David Gibson of Religion News Service described him as “a prelate closely identified with the Catholic Church’s progressive wing.”

Vatican watcher Rocco Palmo, author of the “Whispers in the Loggia” blog, wrote that the appointment is “the most shocking major move the American hierarchy has seen in the last decade and a half.” Another Vatican veteran, John Allen Jr., wrote for the US Catholic online magazine Crux that Cupich so closely mirrors Pope Francis’ theology and style that he could be called the “American Pope Francis in Chicago.”

On his blog, Bishop Robert Lynch of St. Petersburg, Florida, known for his icy relations with the pro-life movement, shared his excitement over the “new breeze” brought by Cupich’s appointment. The bishop noted that Cupich “admires deeply the ecclesiology and vision” of leftist prelates such as former San Francisco Archbishop John Quinn and former Galveston-Houston Archbishop Joseph Fiorenza.

The news of Cupich’s appointment was met with praise in the mainstream press. According to The New York Times Francis has “set the tone” for US appointments by “replacing a combative conservative with a prelate whose pastoral approach to upholding church doctrine is more in keeping with the pope’s inclusive tone.”

It has also been praised by dissident Catholic groups such as the homosexual activist group New Ways Ministries. Last year, the group issued a roundup of evaluations of the various leading members of the US Conference of Catholic Bishops who were set to elect a new president. New Ways praised Cupich for his intervention in the 2012 debate leading up to a referendum on “gay marriage” in Washington State. Cupich’s only intervention was a pastoral letter in which he asked voters to uphold traditional marriage, but also called for a “more civil and honest conversation about Catholic positions on equality.”

“I also want to be very clear that in stating our position, the Catholic Church has no tolerance for the misuse of this moment to incite hostility toward homosexual persons or promote an agenda that is hateful and disrespectful of their human dignity,” Cupich wrote.

Cupich stood out from his fellow US bishops in his response to the abortion-funding Obamacare. Though he joined his other bishops in condemning the Obama administration’s mandate that Catholic employers cover abortifacients and contraceptives, he encouraged Catholic Charities in his diocese to act as an Obamacare navigator and help people sign up for coverage that could fund the destruction of unborn life.

He also condemned the line of other US bishops when they threatened to shut down Catholic social services. “These kind of scare tactics and worse-case scenario predictions are uncalled for,” Cupich wrote in a letter to diocesan employees. “I am confident we can find a way to move forward.”

Today the anti-Catholic organization Call to Action issued a press release saying they are “relieved” at the appointment. “At a time when numerous U.S. Bishops are choosing to fight ideological battles, Pope Francis’ selection of Cupich demonstrates a desire for a humbler, more pastoral church.”

Call to Action, like New Ways Ministries, works to overturn Catholic doctrine, particularly on sexual matters, from within the Church, and has received the censure of the US bishops for their activities. They wrote, “The choice of Cupich shows promise for a church which can be closer to the people. Catholics in Chicago and beyond yearn for a faith rooted in the Gospel call of love and justice over rigid orthodoxy.”