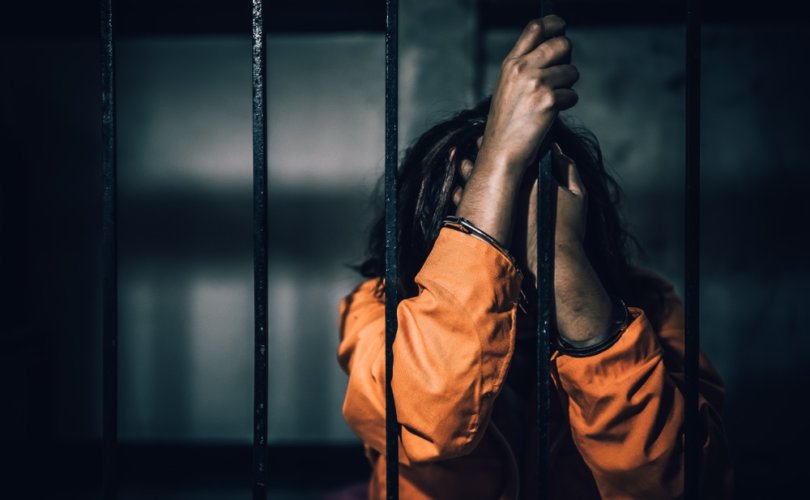 VICTORIA, Australia, September 30, 2020 (LifeSiteNews) —The government of the state of Victoria in Australia has proposed legislation that would allow police and other government-appointed officials to arrest and indefinitely detain others whom they merely suspect of being likely to break lockdown regulations.

The COVID-19 Omnibus (Emergency Measures) Amendment Bill has passed the Victorian parliament’s lower house and will come before the Upper House soon.

The bill legislates that police and other “designated” or “authorised” officers may arrest and detain “high risk” individuals who they consider are “likely to refuse or fail to comply” with lockdown regulations.

Victoria’s draconian lockdown rules include making face coverings mandatory anywhere outside one’s home, even in open spaces when one is alone; daily curfews preventing people from leaving their homes except for work and essential health, care, or safety reasons; and rules preventing residents of the capital city, Melbourne, going farther than 5 km from their homes for any reason other than work, medical care, or caregiving. Churches in Victoria are closed, and people are severely restricted in where they can go and what they can do.

But Victorian attorney general Jill Hennessy explained during a reading of the bill in Parliament earlier this month that the new legislation would give “further emergency powers to authorised officers to issue detention notices and detain particular high-risk persons if the authorised officer reasonably believes that a person is likely to refuse or fail to comply with a direction made by the Chief Health Officer.”

Australian national newspaper The Age stated in an article published earlier this month that a state government spokesman confirmed to the paper that the proposed new laws “could be applied to conspiracy theorists who refuse to self-isolate or severely drug-affected or mentally impaired people who do not have the capacity to quarantine.”

LifeSiteNews has spoken with one Victorian resident who said that he believes that Victoria’s senior politician, state premier Daniel Andrews, will bring the legislation before the Upper House as soon as he is confident he has the political support to push it through and enshrine the bill into law.

A group of 13 senior Victorian lawyers and retired judges have written an open letter calling for the legislation to be amended or rejected.

In addition to the police, the bill as it currently stands would allow the secretary of the Department of Health to appoint other people, including public servants, as “authorised officers.”

One section of the bill notes that “the Secretary [of the Department of Health] by instrument may appoint any of the following to be an authorised officer for the purposes of this Act … a person the Secretary considers appropriate for appointment based on the person's skills, attributes, … experience or otherwise.”

An explanatory memorandum for the bill notes:

This will expand the persons who may be appointed as authorised officers. It is intended to include additional public sector employees from Victoria as well as such employees from other Australian jurisdictions, and individuals with a connection to particular communities to ensure that certain activities, such as contact tracing, can be conducted in a culturally safe manner.

Writing in Spectator Australia, Ian Hanke notes that “[t]his sweeping power means the Secretary could appoint anyone as an ‘authorised officer.’”

“The Bill is mute on the specifics of who could be appointed. The Secretary has been given carte blanche to appoint anyone who has the ‘skills, attributes, experience or otherwise,’” Hanke continues.

Hanke highlights that, as stated in the explanatory memorandum, the bill would also legislate that the “authorised officer” who is empowered to arrest others can “be assisted by any person in exercising a public health risk power under an authorisation given by the Chief Health Officer.”

Moreover, once an individual is detained, he could be held for an indefinite period.  The explanatory memorandum notes:

Section 200(6) of the Public Health and Wellbeing Act 2008 requires an authorised officer to review, at least once every 24 hours during the period that a person is subject to detention under section 200(1)(a), whether the continued detention of the person is reasonably necessary to eliminate or reduce a serious risk to public health.

Hanke argues, “Put simply, this means you can be locked up and detained indefinitely at the whim of a designated officer.”

In an interview last week on Sky News Australia, Daniel Wild, director of research at the Melbourne-based Institute of Public Affairs, explained that the proposed legislation could even empower certain members of the public to arrest and indefinitely detain their political opponents or business competitors.

“The laws could be used to empower a union official, for example, to indefinitely detain a small business–owner, for example, who may just so happen to be in competition with a unionised workforce,” Wild said.

“Or it could be used to empower a Labor Party staffer, or a Labor Party operative, to indefinitely detain, for example, a member of the Liberal Party,” he continued.

Wild also highlighted the possibility that some may be empowered as “officers” capable of making arrests because of their ethnicity.

“Indeed the laws could be used in such a way to confer power on Victorians, not based on their public health expertise or any other expertise, but on the colour of their skin,” he said.

“That is almost exactly what the Victorian attorney-general suggested when she said that one of the intentions of the laws was to confer power on so-called leaders of multicultural communities and multicultural groups,” he continued.

“What that means in practice is that these laws will create, for the first time in Australia’s history, a certain class of citizens who will be empowered with extra rights compared to their fellow citizens on the base of their ethnic origin and of their racial background.”

In an interview with Sky News host Alan Jones this week, Professor David Flint said the legislation would mean ”anybody can be taken off the streets, there can be a midnight knock, you can be taken away by a so-called ‘authorised person,’ some apparatchik of the ruling party and then be held in indefinite detention without your ancient common law right with a court deciding whether that detention is legal.”

In recent weeks, Victoria Police have been gaining worldwide attention for their heavy-handed treatment of those not complying with lockdown restrictions. Videos that have gone viral online on social media in recent weeks include Victoria Police arresting a pregnant woman in her own home for the “crime” of promoting an anti-lockdown event; Victoria Police smashing the door down of a man’s home and arresting him for allegedly promoting anti-lockdown events online; and a video that shows a young woman being forced to the ground by a large male police officer for the “crime” of not wearing a mask in public.

Earlier this month, Premier Daniel Andrews said that “all this can be avoided if people don't protest” coronavirus restrictions in response to questions about video of police first knocking down a mentally ill man with their vehicle and subsequently stomping on his head. An official police statement described the stomp as an “inappropriate use of force” and the “use of force in using a police vehicle” as “concerning.”

The man had to be put in a medically induced coma. His family say they will pursue legal action against the police.

Last month, Victoria police chief commissioner Shane Patton was unapologetic as he explained that police had in some instances been smashing car windows due to people inside the cars not cooperating with police or following the government’s coronavirus restrictions.

In a recent interview with LifeSiteNews editor in chief John-Henry Westen, Dr. Bella d’Abrera, the director of the Foundations of Western Civilization Program at the Institute of Public Affairs in Melbourne, said it would seem that Melbourne’s extraordinary lockdown regulations are likely being implemented as a sort of test case to see how to control and manipulate the population.