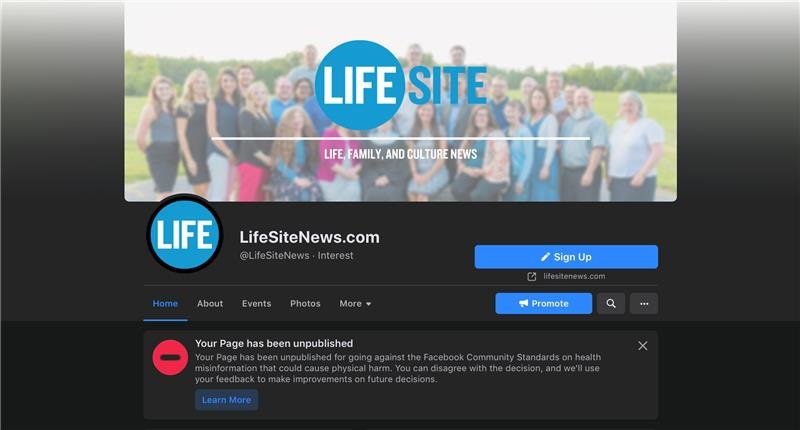 WASHINGTON, May 7, 2021 (LifeSiteNews) — Four of the most powerful anti-life, anti-marriage and family, and anti-human dignity organizations in the United States have just taken credit for influencing Facebook to permanently remove LifeSiteNews from the leading social media platform.

In a joint statement Media Matters for America, LGBT powerhouses GLAAD and the Human Rights Campaign, and NARAL Pro-Choice America said in part:

Their joint action makes clear in no uncertain terms that the culture war, driven by sexual revolutionaries, is not only very real, it is cutthroat. Together these four form a new axis of evil, seeking to eliminate all voices who oppose their inhuman ideologies.

Their statement concludes by revealing their next move:

LifeSiteNews still has three pages that remain on the platform — which Facebook must be committed to removing.

NARAL president Ilyse Hogue launched a tweetstorm not only expressing glee over LifeSiteNews’ deplatforming — she also blamed Facebook for forcing the four to act as watchdogs to bring down LifeSiteNews:

Big news: Facebook deplatformed LifeSiteNews this week for gross distribution of COVID disinformation. This didn’t happen because of their good will. [NARAL, Media Matters for America, Human Rights Campaign, and GLAAD] worked to document these transgressions and share them with Facebook. And I have some thoughts.

1st, we’ll take the win. The more platforms that ban LifeSite, the better because they are primary purveyors of some of the most toxic disinformation out there. BUT, it shouldn’t be on … us to have to prove that to Facebook. They need internal systems to do this job.

Also … and this is important … it took COVID disinformation for Facebook to deplatform LifeSite, despite documented history of white supremacist content, anti-LGBTQ content, and a boatload of abortion disinformation, all of which has led to immeasurable damage in people’s lives.

So, we’re far from done here. Facebook has set a precedent on COVID disinformation and it should be applied universally across actors on their platform, and they should not rely on users and groups to do the heavy lifting of monitoring, tracking and documenting abuse.

Crucially, it’s abhorrent the bar is so low. Hate speech remains rampant on the site, and the purveyors of it left unchecked. The rights and well being of BIPOC people, pregnant people, LGBTQ people, and others who are harmed daily need to be the highest priority moving forward.

Steve Jalsevac, President and Co-Founder of LifeSiteNews, commented: “The fact that four pro-abortion, left-wing groups have issued a joint statement taking credit for LifeSite’s Facebook ban is nothing short of astounding. Big Abortion and Big Tech clearly colluded to censor us, using the well-researched information we report about coronavirus vaccines as a pretext.”

“What does this all really mean?” Jalsevac asked. “That LifeSiteNews reports were having a very uncomfortable impact on all their propaganda with our factual, well-researched articles, with numerous quotes from real experts. The only strategy they have left is to typically spout meaningless, ad hominem charges and try to shut us down because they don’t have convincing counter arguments.”

“While this is a win, it came far too late. For years, LifeSiteNews has been allowed to trumpet falsehoods and advance the anti-choice agenda of power and control unchecked. We must continue to hold accountable the online platforms that allow extremism to flourish in the spotlight.”