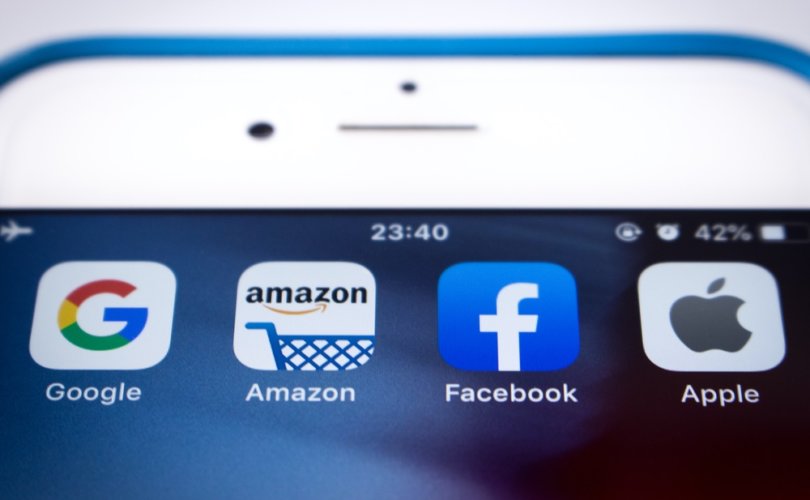 WASHINGTON, D.C. (LifeSiteNews) – New legislation aimed at reining in Big Tech has united unusual bedfellows both for and against.

S.2992, the American Innovation and Choice Online Act introduced by Democrat U.S. Sen. Amy Klobuchar, is co-sponsored by an even number of Republicans and Democrats, including Josh Hawley, Lindsey Graham, and Steve Daines from the GOP, and Dick Durbin, Mazie Hirono, and Cory Booker across the aisle.

According to its official summary, the bill “prohibits certain large online platforms from … giving preference to their own products on the platform, unfairly limiting the availability on the platform of competing products from another business, or discriminating in the application or enforcement of the platform’s terms of service among similarly situated users.”

It also says a platform cannot “materially restrict or impede the capacity of a competing business user to access or interoperate with the same platform, operating system, or hardware or software features,” “restricts the platform’s use of nonpublic data obtained from or generated on the platform and prohibits the platform from restricting access to platform data generated by the activity of a competing business user,” and “provides additional restrictions related to installing or uninstalling software, search or ranking functionality, and retaliation for contact with law enforcement regarding actual or potential violations of law.”

S.2992 “will outlaw much of the discrimination and self-preferencing that tech companies currently get away with” to “run roughshod over small businesses,” Hawley declared in October, when the bill was introduced. The Senate Judiciary Committee voted 16-6 last week to approve it.

As expected, tech companies oppose the legislation, with Apple CEO Tim Cook and Google CEO Sundar Pichai reportedly personally phoning senators in hopes of urging them to vote it down. But they are not the only ones.

Writing at the conservative Townhall, columnist Drew Johnson maintains that the legislation needs “massive edits” to correct its use of “flawed metrics to attack certain businesses and favor others.”

Specifically, Johnson faults the bill for calculating the size of its penalizing fines on the basis of “market capitalization – the market value of a company’s outstanding shares of stock,” which he argues can lead to misdiagnosing accompany’s actual value by looking at stock prices at a particular moment in time, citing the examples of GameStop’s Reddit-driven January 2021 stock boom and the disparity between Tesla’s stock value and its struggling sales of electric vehicles.

Johnson also faults the bill for only applying to companies that “not only have at least 50 million users or at least 100,000 business users, but also must be part of a company with market capitalization over $550 billion,” which he suspects was chosen “to select winners and losers in the bill.”

The discontent over S.2992 reflects the diversity of factions with grievances against Big Tech, and the potential pitfalls of “bipartisan” bill drafting. The legislation does not directly address conservatives’ main objection with the likes of Google, Facebook, and Twitter, which is their discrimination against conservative content, though some have suggested that breaking up the companies could be part of the solution, by reducing their overall size and influence.