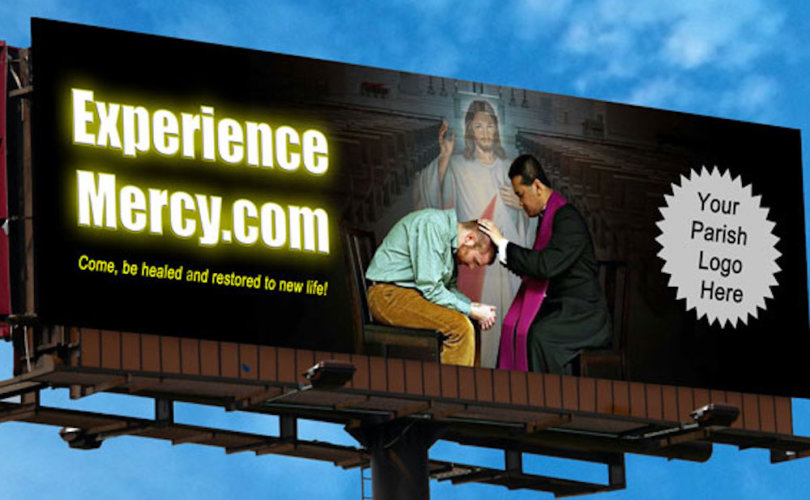 NEW BRIGHTON, Minnesota (LifeSiteNews) – A new billboard campaign called “Experience Mercy” is encouraging Catholics to repent of their sins and go to the Sacrament of Confession. And the organizers are asking parishes across the nation to join them.

The Knights of Columbus and the Men's Fellowship groups at St. John the Baptist Catholic Church and School in New Brighton, Minnesota, launched the campaign, which they hope “will allow God to touch people's hearts and persuade them to come to confession.”

Experience Mercy invites parishes to co-sponsor billboards that advertise the website ExperienceMercy.com, which in turn will list parishes’ locations and confession schedules.  The campaign also offers to co-sponsors access to campaign materials such as fliers, stickers, lawn signs, and invitation cards that can be customized with a parish’s information.

Starting in December 2015 and through November 2016, the Catholic Church is celebrating an Extraordinary Jubilee Year of Mercy.  Catholics are encouraged to avail themselves of God’s mercy during this year, which Pope Francis said is a “time to offer everyone, everyone, the way of forgiveness and reconciliation.”

ExperienceMercy.com features videos promoting the Christian message, Jesus’ call for people to repent of their sins, and basic information about Confession.  The website promotes a number of other resources related to Confession, such as links to the Catechism of the Catholic Church, articles on overcoming habitual sin, and penitential prayers.

“It is not possible, and it is not right, for us to contemplate God’s mercy, without also contemplating our sins,” said Father David Pignato at the Diocese of Arlington Men’s Conference during the Jubilee Year of Mercy.  “It’s not even logical to think of God’s mercy, without also thinking of our sins, because there’s no need for mercy, if there’s no sin. Mercy is God’s response and cure for sin.”