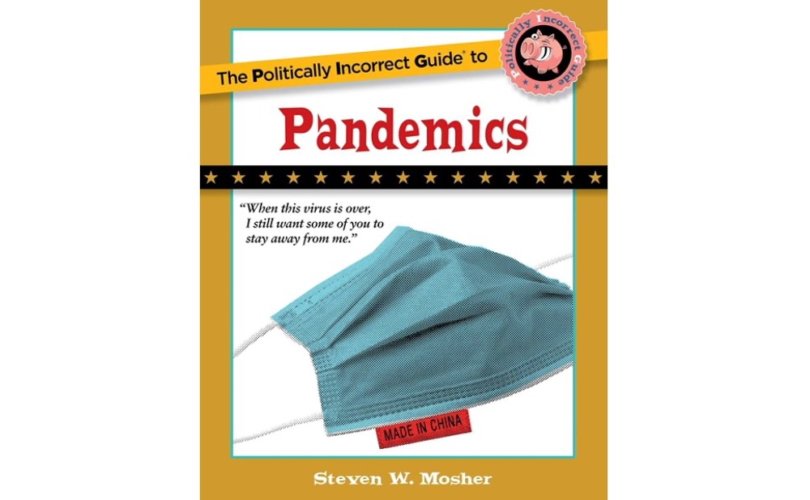 (LifeSiteNews) — In the turbulent sea of pseudo-scientific CDC misinformation about the Wuhan virus, it has been difficult to find a stable life-raft of well-reasoned facts to help make sense of the last two years of germs, lockdowns, and mandated injections.

That’s where The Politically Incorrect Guide to Pandemics, published July 26, comes in handy.

The fact-based and snarky manual takes readers on a journey from history’s first recorded pandemics all the way to the 2020 COVID-19 epidemic. Written by Steven Mosher, a leading authority on China, president of the Population Research Institute, and frequent contributor to LifeSiteNews who has also made TV appearances on Good Morning America, 60 Minutes, The Today Show, 20/20, FOX, and CNN, the book is as well-researched as it is enlightening and entertaining.

In the guide, Mosher highlights the absurdity of masking, quarantining, mandated experimental shots, endless media fear-mongering, and the plot for power that lurks beneath it all.

Dennis Prager speaks with Steven Mosher about China’s culpability for the COVID-19 pandemic and his book, “The Politically Incorrect Guide to Pandemics.”

The comprehensive manual begins with a thorough recounting of the oft-forgotten history of pandemics, observing that despite the ginned-up hysteria that made COVID-19 seem like the worst viral scourge to assault humanity, the “butcher’s bill” from other microorganisms from the beginning of time until now “numbers in the billions.”

“Pandemics, it turns out, often mark the beginning of the end for an empire,” Mosher says, noting that like COVID, many of the world’s pandemics have also originated in China.

READ: COVID-19 is the latest in a long line of deadly epidemics that came out of China

According to Mosher, “[w]e are living on a plague planet,” and despite the fevered push for universal vaccination against COVID-19, “Every pandemic in history has been ended by natural immunity.”

After providing comprehensive yet accessible overviews of every plague and pandemic from the second century AD until today, Mosher cuts back the pseudo-scientific obfuscation from the federal public health agencies to showcase the stark realities of the COVID-19 crisis.

Mosher, who holds an advanced degree in biological sciences and backs up his claims with an extensive bibliography of sources, argues that the virus known as COVID-19 was developed in Wuhan, China, by “ … bioweapons experts of the People’s Liberation Army” who “had mastered 21st-century genomic technology, created an enhanced coronavirus in the lab, and let it out into the world.”

I could have told you that. In fact, I did in the pages of the New York Post in February 2020. And now again in the pages of my Politically Incorrect Guide to Pandemics. https://t.co/Cn3DBNpdKo

According to Mosher, the World Health Organization’s insistence that people stop calling COVID-19 the Wuhan Flu, or the China Virus, is just a “clumsy effort to obscure the origins of the pandemic” in what he argues is “part of the WHO’s larger effort to cover up China’s culpability in general.”

“The China Virus is not the worst disease that humanity has had to confront,” he reminds readers. “It’s not the bubonic plague.”

Instead, the threat posed by COVID-19 is more political than virological.

Mosher says China didn’t just create the virus — they also created the top-down authoritarian response that turned free people across the world into subjects of a medical dictatorship, flooded unaccountable corporations with unprecedented revenue, and plunged the world into recession.

“The Chinese Communist Party itself is the biggest super-spreader on the planet,” Mosher quips, pointing out that the early shock pandemic footage from China “convinced some Western officials that a new Spanish Flu was on the loose,” causing them “to advocate for some of the same extreme measures to be adopted in their own country, with the same justification: to protect public health.”

“Many in the West were shocked by the draconian lockdowns, not realizing that they themselves would soon enough lose their freedoms to copycat measures,” he says.

According to Mosher, the COVID-19 pandemic has exposed two major threats currently facing the United States: “one from without and one from within.”

The external threat, he says, “comes from Communist China, whose leaders, pursuing their ambitions for world domination, unleashed the China Virus on the world.”

The internal threat, which he says is “much more insidious,” comes from “[o]ur corporate ruling elite: Washington, Wall Street, and Big Tech,” which “profited from the Covid pandemic both politically and economically.”

“While the ‘public health’ measures that they imposed on the rest of us damaged the mental and physical health of many, they also enabled the biggest transfer of wealth from the middle class to the elite in American history,” Mosher says.

The Politically Incorrect Guide to Pandemics is now available for sale from major retailers, including Amazon, Barnes and Noble, Walmart, Books-A-Million, and Indie Bound. An audiobook version is also available.

Mosher, a Roman Catholic husband and father of nine, is also the author of the best-selling titles Mother’s Ordeal: One Woman’s Fight Against China’s One-Child-Policy, and Bully of Asia.