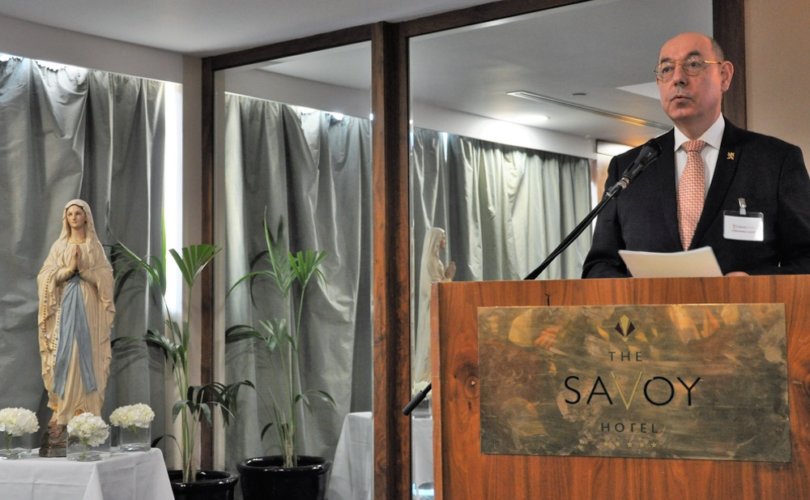 LIMERICK, Ireland, December 13, 2018 (LifeSiteNews) – The “paradigm shift” presented by this pontificate is nothing short of a “revolution that basically consists of – from a theological standpoint – changing the concept of Revelation,” a Chilean author argues in a new book.

José Antonio Ureta is the author of that book, Pope Francis’s Paradigm Shift: Continuity or Rupture in the Mission of the Church? He spoke exclusively with LifeSiteNews as part of Lumen Fidei’s Catholic Voice conference in Limerick, Ireland.

“For us, Revelation are the Mysteries which God has taught us, but for them? Revelation is imminent…so the Spirit is revealing Himself in all of these social phenomenon – like immigration, feminism, so-called LGBT Agenda – there they find the ‘spirit.’ In this way, they try to adapt Christ’s teachings to this revolutionary agenda of the world, today,” he said.

In his speech promoting the release of the English translation of his new book, Ureta went further, saying:

A “paradigm shift” is not something menial. The expression was popularized by Thomas Khun, the American physicist, historian and philosopher of science, in his 1962 book The Structure of Scientific Revolutions. “Paradigm shift” conveys the idea that human knowledge does not progress in a linear and continuous way – we will call such progress Tradition – but undergoes periodic revolutions that abruptly render obsolete all previous beliefs.

In spite of the relativistic and evolutionary meaning of the term, Pope Francis used it in the recent Apostolic Constitution Veritatis Gaudium on Catholic university teaching, where he called for “a broad and generous effort at a radical paradigm shift, or rather – dare I say – at ‘a bold cultural revolution.’”

Other high prelates close to him have also used the expression, always in an ideologically marked sense. Cardinal Blase Cupich, for example, gave a conference in the United Kingdom, entitled precisely: “Pope Francis’ Revolution of Mercy: Amoris Laetitia as a New Paradigm of Catholicity.” In his talk, the cardinal archbishop of Chicago advocates the need for a “nothing short [of] revolutionary” paradigm shift in the relationship between moral doctrine and pastoral praxis. This “shift” consists above all in inverting the order of things: Doctrine and law must be subordinated to life as contemporary man lives it. The Church should not teach but should learn from social reality. She should accompany people in their different “situations,” without seeking to impose on them “an abstract, isolated set of truths.”

When pressed, Ureta provided LifeSiteNews with further examples: “This revolution applies to various issues – for instance, the abandonment of non-negotiable values. The Pope has even said that he does not understand the expression of ‘non-negotiable values.’ Obviously, there are essential values in Catholic teaching that are non-negotiable. The sacredness of human life; marriage…being between a man and a woman; the indissolubility of marriage; the rights of parents to educate their children – these are real, non-negotiable values – while immigration [and] ecology are disputable. The latter are political/sociological phenomenon that may be discussed or debated, but the former? You cannot. They are immutable.”

During his speech to the Catholic Voice conference, Ureta explained that the moral relativism of this “paradigm shift” had already impacted theology in a substantial way:

Even before the release of Amoris Laetitia, the intermediary report of the first Synod on the Family held, in the name of the principle of gradualness, that in extramarital unions – such as pre-marital cohabitation, civil second union or even homosexual union – we must recognize “seeds of the Word that have spread beyond its visible and sacramental boundaries.”

As well-known Austrian philosopher Josef Seifert pointed out, if no. 303 of Amoris Laetitia holds true for adultery, there is no reason why it should not be valid for abortion, robbery, slander, or any other intrinsically evil act. The bishops of the Maritime provinces of Canada did not take much time to apply Amoris Laetitia to suicide, authorizing Last Sacraments and Catholic burial for those who asked for euthanasia.

Ureta cited another impact of this “paradigm shift” in his speech: the recent, abrupt changes made to the Catechism of the Catholic Church on the death penalty.

Pope Francis made concrete (the) application of his vision of a dynamic deposit of faith by re-writing what the Catechism of the Catholic Church said about capital punishment, banning the latter under the pretense that death penalty was against mankind’s new understanding of human dignity and a better awareness of the redeeming character of penalties.

Here you have a case where a “paradigm shift” represents a doctrinal change in the understanding of one aspect of our Catholic faith. Many scholars immediately reacted to the change, observing that the same argument of “mankind’s new understanding of this or that” could be used to change Catholic doctrine regarding, for instance, the intrinsically disordered nature of same sex attraction or the evil of artificial contraception.

The role of Marxism

Ureta spoke with LifeSiteNews about another theme addressed in his book, a socio-political foundation to this “new paradigm shift” narrative being posited by Pope Francis and many of his closest advisors.

“In Latin America, ‘popular movements’ — everybody knows — these movements are revolutionary,” he explained.

“They are Marxist – such as Pueblo Sin Fronteras or the Cartonaros in Buenos Ares, Argentina. The leaders are Marxist, revolutionary, and the pope is supporting them. They have already had three big gatherings – two in the Vatican and one outside it, but all supported by the Holy See. The pope is clearly favoring this agenda of an ‘open society,’” he said, referencing an agenda promoted by many leftist groups and billionaire George Soros.

“All of this is an attempt to destroy the remnants of our Christian civilization, to implement a revolutionary agenda – the same as with ecology,” Ureta continued. He noted that a recent symposium put on by the Pontifical Academy of Science and the Pontifical Academy of Social Sciences invited pro-abortion Jeffrey Sachs to speak. Sachs’s presentation “included the Tablets of the Ten Commandments juxtaposed with what he proposed were the ‘New Commandments of Sustainable Development.’ So, of course, people are getting confused by the pope’s words and actions – and this is why I wrote the book. To clarify the issues at hand, and clarify the minds of those who read it.”

Priests “who don’t follow this ‘new paradigm shift’— because they believe the real paradigm shift was the Incarnation and the Redemption by Our Lord Jesus Christ…have been very supportive,” Ureta said. “I have received letters from some cardinals and bishops, saying that they had read the book and found it very insightful for the faithful. From other bishops – and we have sent the book to many, many bishops – there’s silence. Either they agree with the pope’s agenda, and thus don’t want to give publicity to my book, or they are scared. They are scared to say what they think, because they don’t want to be ostracized or somehow blamed by the media or their fellow bishops.”

LifeSiteNews asked Ureta if he plans to write additional books addressing other areas of confusion within the Church. The author replied, “The problem is this pontificate advances so quickly, that I would have to write a book every week. My second addition, in Italian, already has an appendix expanding on issues of concern that have developed in the last five months. I may add more to the appendices in the future, or may have to write a new book addressing new issues.”