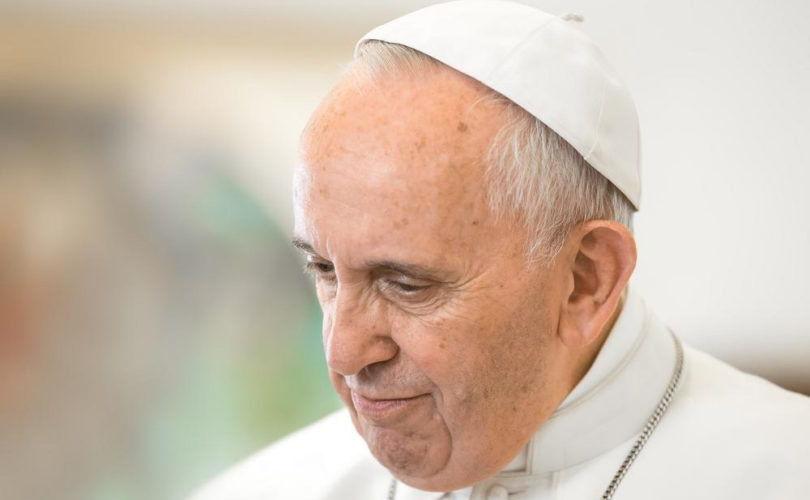 January 15, 2016 (LifeSiteNews) – In a rather fascinating book-length interview with Pope Francis, Vatican expert reporter Andrea Tornielli has Pope Francis defining his often-obscure terminology so that a greater understanding of the Argentine pontiff is now possible.  What does Pope Francis mean by “scholars of the law,” who he condemns so often in his morning homilies at Casa Santa Marta?  What does he mean by “corruption,” which he speaks of as worse than sin?  What is his take on homosexual people given his “who am I to judge” remark? Can there be mercy without acknowledgment of one’s sins?

All these questions and more are given in simple Q&A format in Pope Francis: The Name of God is Mercy, released Tuesday.

Overall the book is reassuring to those Catholics wondering if the pope, because he keeps such close company with so many dissident clergy, still holds to the age-old definitions of sin and repentance. It also, however, confirms Francis’ odd perception of many faithful clergy as rigid rigorists who lack mercy, and his apparent inability to see those very characteristics in the liberal clergy he counts as his most trusted allies.

“The Church condemns sin because it has to relay the truth: ‘This is a sin,’” says the pope. “But at the same time, it embraces the sinner who recognizes himself as such, it welcomes him, it speaks to him of the infinite mercy of God.”

Pope Francis stresses several times that there can be no mercy without acknowledgment of sin. “If you don’t recognize yourself as a sinner, it means you don’t want to receive it, it means that you don’t feel the need for it,” he says. And again, “If we do not begin by examining our wretchedness, if we stay lost and despair that we will never be forgiven, we end up licking our wounds, and they stay open and never heal.”

Speaking of the role of the confessor, Francis acknowledges a priest may have to refuse someone absolution (forgiveness). “If the confessor cannot absolve a person, he needs to explain why, he needs to give them a blessing, even without the holy sacrament,” says the pope. “The very fact that someone goes to the confessional indicates an initiation of repentance, even if it is not conscious,” he explains.

Asked about homosexual persons in relation to his “who am I to judge” comment, Pope Francis said, “I prefer that homosexuals come to confession, that they stay close to the Lord, and that we pray all together. You can advise them to pray, show goodwill, show them the way, and accompany them along it.”

In the context of the whole book it seemed that Francis was indicating that persons with same-sex attraction who have sinned by engaging in sexual behavior outside of a natural man-woman marriage should confess those sins. However, the statement itself was unclear, leading some like Francis DeBernardo, executive director of New Ways Ministry, to suggest otherwise.  The pope’s comment about homosexuals in confession, said Bernardo, “can raise a red flag for some,” but “I don’t think he was calling for gay and lesbian people to confess sexual ‘sins’ based on their orientations and commitments. … I think Pope Francis sees confession as a good thing for all.”

As with other interviews, however, the pope’s definite distaste for Catholics he perceives as rigid adherents of the law comes through loud and clear.  For instance, when he defines corruption and exemplifies it, most US faithful Catholics could easily picture Nancy Pelosi. “The corrupt man,” says the pope, “is the one who sins but does not repent, who sins and pretends to be Christian, and it is this double life that is scandalous.” Pope Francis himself, however, seems to see tradition-minded Catholics in that description.

“I will say that there is often a kind of hypocrisy in them, a formal adherence to the law that hides very deep wounds,” says the pope of those he calls “scholars of the law.” Jesus, says the pope, “defines them as 'whited sepulchers' who appear devout from the outside, but inside, on the inside… hypocrites.”

Indeed Pope Francis describes such Catholic “scholars of the law” as his greatest enemies, casting the descriptor in Christ’s words. Scholars of the law, he said “represent the principal opposition to Jesus; they challenge him in the name of doctrine.” And he adds, “This approach is repeated throughout the long history of the Church.”

It is as if the pope believes the false portrayal that liberals make of faithful Catholics. That he may have a substantial misperception concerning faithful or traditional Catholics would not be surprising given the many distorted perceptions he undoubtedly has received from the more liberal bishops with whom he has chosen to associate.  They often disdain faithful Catholics, especially those who are enthusiastically and uncompromisingly pro-life and pro-family.

The falsehood is evident in Francis’ description of “scholars of the law” since in addition to insisting on doctrine, he says they are self-interested, lacking in mercy, have closed attitudes, love the place of honor, want to be called master, fail to recognize their own sins and refuse to reach out to the poor and marginalized. If we look at the man the media regards as the epitome of the “scholar of the law,” Cardinal Raymond Burke, we see the opposite of each and every one of those negative attitudes. If we think of Mother Teresa, whom the pope holds up in the interview as an example of mercy beyond all human expectation, she insisted on the pro-life doctrine at all times, even those most inconvenient.

Moreover, in my twenty years of contact with Catholic life and family leaders around the world, I have found them to be the kindest, most generous, humble, forgiving and giving people on earth. Many of them converts or reverts, they recognize sin in their own lives and thus can reach out with unbelievable mercy and understanding to women in crisis pregnancy and to sinners suffering due to their harmful choices.

To be sure, faithful Catholics can fall and exhibit all those sinful attitudes, but when they do wake up and recognize their wrongdoing they repent. They go to confession vowing to try never again to offend Christ in those ways.

In my two decades of reporting on the Church I’ve also witnessed over and over again dissident prelates demonstrating those negatives attitudes mentioned by Pope Francis. I’ve seen liberal bishops:

We must pray that the Holy Father may see in the many dissident prelates he takes as his closest collaborators the very characteristics he falsely perceives in faithful clergy. May he experience faithful, tradition-minded Catholics who, while having a desire for orthodoxy in doctrine and liturgy, also naturally have a great love for Christ and their fellow man, and live their whole lives with that love as their primary motivation.