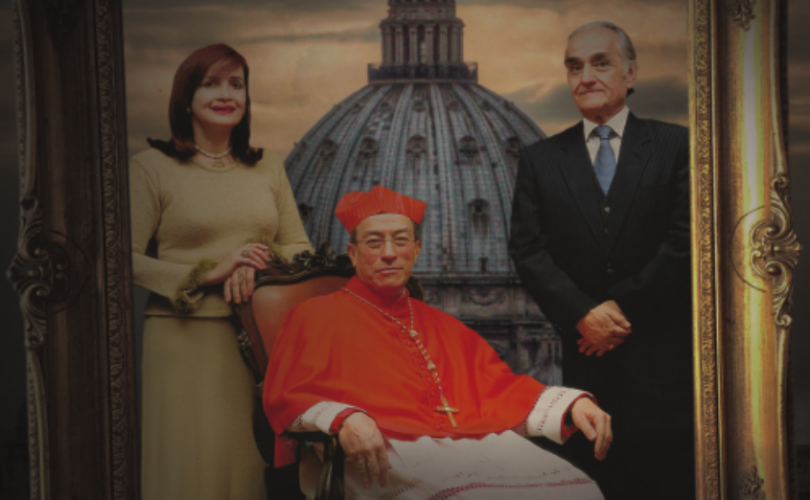 April 28, 2021 (LifeSiteNews) — The widow of the former dean of the Vatican diplomatic corps is revealing the involvement of Pope Francis in the cover-up of his top cardinal, Óscar Andrés Rodríguez Maradiaga, in a new book now available from Faithful Insight Books, a publishing imprint of LifeSiteNews.

Sacred Betrayals: A Widow Raises Her Voice Against the Corruption of the Francis Papacy reveals evidence that Cardinal Mardiaga covered up the sexual abuse and misconduct of his auxiliary bishop, Juan José Pineda Fasquelle, and diverted millions of dollars of Church money to fraudulent investment schemes that have since disappeared. The investments included the life savings of Honduras’ ambassador to the Holy See, Alejandro Valladares and his wife, Martha Alegría Reichmann.

Reichmann and her husband hosted Cardinal Maradiaga in their home for decades, until they fell afoul of Maradiaga after protesting against the scandalous behavior of his auxiliary bishop, Juan José Pineda, who was ultimately accused of sexual predation against seminarians and disappeared from Honduras after resigning his office.

When the Valladares family’s life savings disappeared in a fraudulent investment scheme promoted to them by Maradiaga, Alegría Reichmann took her case to the height of the Vatican hierarchy and even to Pope Francis himself, but found that no one was willing to correct the wayward Maradiaga, even after the financial and sexual scandals were exposed in the international media.

Sacred Betrayals recounts Alegría Reichmann’s struggle to find justice for her family, and to alert the Catholic Church to the corruption of Pope Francis’ most influential and powerful cardinal.

Philip Lawler, editor of Catholic World News, writes: “This book is dynamite! The compelling testimony of Martha Alegria Reichmann— a widow betrayed by a powerful cardinal she had once considered a close friend— has the power to break down the wall of silence that protects Cardinal Óscar Rodríguez Maradiaga, and expose the corruption that reaches to the very top of the Vatican.”

In addition to Pope Francis and Cardinal Maradiaga, Sacred Betrayals recounts the involvement of other high curial officials, including Cardinal Pietro Parolin and Cardinal Marc Ouellet, who seemed helpless to proceed against Maradiaga because of Francis’ protection.

“Alegría’s testimony regarding Cardinal Maradiaga’s involvement of their family in a fraudulent financial scheme, as well as his defense and cover-ups of his auxiliary bishop is deeply shocking. More disturbing is her revelation that Francis continues to protect Maradiaga despite all the misdeeds for which Maradiaga has made himself personally responsible,” writes the former Apostolic Nuncio to the United States, Carlo Maria Viganò, in his foreword to the book.

Alegría Reichmann’s accusations come in the wake of exploding financial and moral scandals in the Vatican, as cardinals are removed from their positions following accusations of financial malfeasance. While others have fallen, Cardinal Maradiaga continues to be defended by Pope Francis, who has refused to believe repeated reports of misconduct by the prelate.

“The pope is determined to support and cover up Maradiaga knowing of his corruption and all he is accused of, and that he himself has verified through the investigation made by his friend Pedro Casaretto,” writes Alegría Reichmann, who adds that she believes that “more and more scandals will be exposed because time is like the sea: the sea brings everything back to shore, from bottles to corpses.”

Sacred Betrayals was formerly only available in Honduras in Spanish, and the new publication has been translated into English and adapted for a global audience by Faithful Insight Books, a publishing imprint of LifeSiteNews.