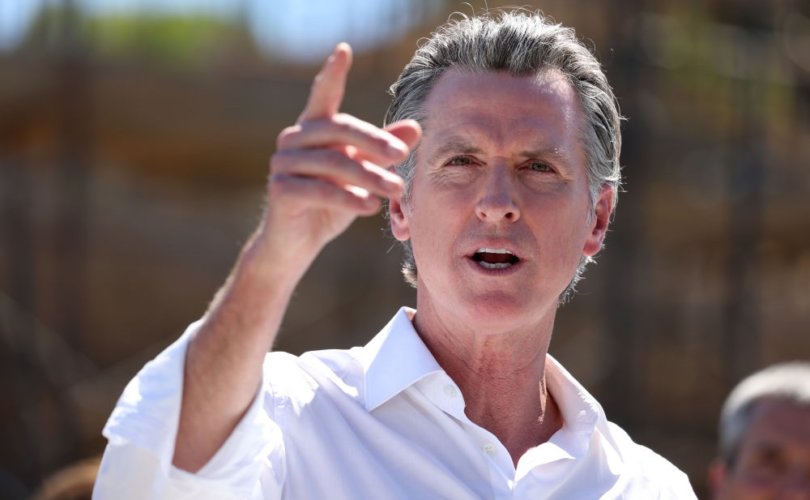 Under the new law, companies are prohibited from sharing information like geolocation data, search histories, and social media messages from people accused of illegally performing an abortion or helping a woman obtain an abortion, even if served with a search warrant or subpoena.

The measure will also block cooperation between California and law enforcement officials in pro-life states when those officials are attempting to investigate an abortion deemed unlawful in their states but legal in California.

According to a September 27 press release from California Attorney General Rob Bonta’s office, the measure “prohibits the arrest of anyone for aiding or performing a lawful abortion in California and prohibits California law enforcement from sharing information or assisting in an investigation related to a lawful abortion with out-of-state agencies.”

The legislation additionally mandates that law enforcement officials in pro-life states “seeking data or records from corporations in California” must “provide an attestation that the investigation does not involve any crime related to an abortion that is lawful under California law.”

Authored by Assemblymember Rebecca Bauer-Kahan and sponsored by Attorney General Bonta, AB 1242 is designed to stand in direct opposition to pro-life legislation in Republican-led states making abortion a criminal offense.

“California is setting a national privacy standard,” Bauer-Kahan said in last week’s press release. “As pro-choice states, we must be just as proactive in protecting abortion rights as extremist states have been in destroying them.”

So proud #AB1242 has been signed! I partnered with @AGRobBonta on this bill protecting abortion nationwide. It shields CA based tech companies from sharing data with out of state law enforcement, & prevents arrest for legal abortion in California. #AbortionIsAHumanRight #CALeg

To date, 14 states have passed near-total abortion bans, and others have enacted other restrictions aimed at limiting the number of legal abortions permissible within the state. Laws banning abortion penalize abortionists and people who assist in obtaining an abortion, but no state abortion ban currently on the books would criminally penalize the mother.

CNN pointed out that AB 1242 could pit businesses between California law and the laws in pro-life states, since companies could face legal action from either side.

RELATED: LIVE UPDATES – Most abortions are banned in 14 states, more states to follow

The new law could also stymie investigations into brutal crimes.

Earlier this year, a Nebraska mother allegedly helped her teenage pregnant daughter take abortion pills and deliver a late-term baby, after which the pair reportedly “wrapped him in plastic to smother him and lit him on fire and then buried the body.”

Before and after the pregnant teen delivered her deceased baby, she and her mother reportedly communicated via Facebook messages to plan the illegal abortion and coordinate the disposal of the body, The Lincoln Journal Star reported. As part of a criminal investigation into the incident, law enforcement officials served Facebook with a search warrant to gain access to the private messages.

By prohibiting California-based major technology companies from handing over private messages and information, even if served with a warrant, investigations into such instances could be rendered far more difficult if not impossible.

Jake Laperruque, deputy director for security and surveillance at the Center for Democracy and Technology, told StateScoop the legislation will open up serious legal questions, particularly if a pro-life state serves a California-based media company with a warrant.

“I think that’s going to happen and it’ll go to court,” Laperruque told the outlet.

California’s new law blocking enforcement of pro-life laws was part of a broader legislative package aimed at entrenching California as an “abortion sanctuary” as dozens of Republican-led states enact laws to protect the lives of preborn babies.

As LifeSiteNews previously reported, the 13 new bills signed by Newsom will allocate over $200 million in new abortion funding, greenlight recruitment of abortionists to broaden availability, and ensure that almost no abortion will be prosecuted under the law. Pro-life critics have warned that one of the laws, AB 2223, could also be interpreted as decriminalizing infanticide.

Last month, Newsom also signed a measure essentially making California a sanctuary for transgenderism, encouraging parents to bring their kids to the Golden State to subject them to mutilating “sex-change” surgeries and drugs.

The law protects parents who want to take away a child from his or her other parent in order to have him or her chemically or genitally castrated.

By signing SB107, Newsom has “awarded himself custody of every child struggling with gender dysphoria, elected himself governor of every state to thwart their own laws that might protect children from harmful & sterilizing gender ‘transitions,’ and dared the entire nation to do anything about it,” Family Policy Alliance president and CEO Craig DeRoche said.