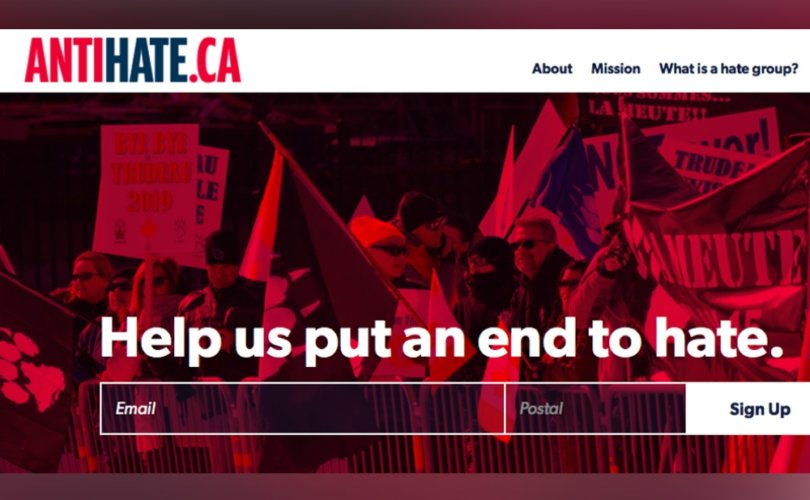 The group defines a hate group as “a group which, as demonstrated by statements by its leaders or its activities, is overtly hateful towards, or creates an environment of overt hatred towards, an identifiable group as defined in the Criminal Code, the Canadian Human Rights Act, and/or the Charter of Rights and Freedoms.”

Organizations to be listed as a “hate group” will include, for example, those who promote “extreme misogyny” and those which are “anti-LGBTQ+.” Labels such as these are frequently applied by the left to pro-life as well as pro-family organizations.

Whatcott, a Christian activist, was charged with the indictable criminal offence of “promoting hatred” against an identifiable group, namely, the homosexual community. Toronto police laid the charge and issued a Canada-wide warrant for Whatcott in May, almost two years after he and five others marched in Toronto’ 2016 Pride Parade disguised as a “gay zombies” to distribute pamphlets warning of the physical and spiritual dangers of sodomy.

The Canadian Anti-Hate Network said that it “welcomes this news” of Whatcott’s charge by police.

REAL Women vice president Gwen Landolt predicted CAN would target pro-family groups when it announced, with its initial launch in May, that the Alabama-based SPLC had given it start-up funds.

CAN was formed by more than 15 academics, journalists, legal experts and community leaders, and its chair is Bernie Farber, former CEO of the Canadian Jewish Congress, CBC reported.

CAN executive director Evan Balgord told TVO at that time that Canada’s anti-hate network will emulate the SPLC, which operates a website with a “hate” map and a “hate watch.”

“I realized there was a real sense amongst people who cover this issue that we didn’t have an organization like the Southern Poverty Law Center here in Canada,” said Balgord, a research affiliate with the Canadian Network for Research on Terrorism, Security, and Society and a journalist who investigates far-right groups.

“Something well-resourced, official, and that could speak authoritatively on these issues in Canada,” he added.

“If any organization is concerning in the United States, it’s the Southern Poverty Law Center, because they determine what’s ‘hate’,” she said.

“And ‘hate’ to them is anything that is not an expression of aggressive politically correct thought on homosexuality, abortion, transgenderism. Anything and anyone who doesn’t fall and agree with those propositions, they define as hateful.”

Indeed, topping SPLC’s list of trending Twitter hashtags it considered to be promoting “hate” this January was “#merrychristmas.”

Along with “Merry Christmas” the SPLC Hate Tracker website also listed #christmas, #merrychristmaseve and #jesus in top trends used by what it described as “far-right Twitter users.”

But SPLC was proven in June to be far from what CAN’s Balgord aspires to, that is, “something well-resourced, official, and that could speak authoritatively on these issues.”

Indeed, five days before CAN launched its Twitter and website June 21, SPLC announced it had paid out $3.375 million to settle a defamation suit with British-based Quilliam Foundation, and founder Maajid Nawaz, for falsely labelling them “anti-Muslim extremists.”

It remains to be seen if that call will be heeded, but given CAN’s connection to SPLC, this turn of events can only undermine the fledgling Canadian anti-hate network’s credibility in its fight against the alt-right.