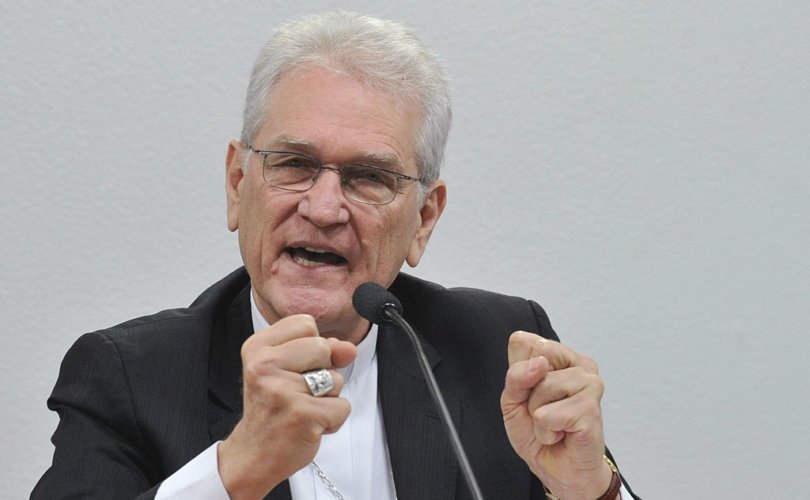 VATICAN CITY (LifeSiteNews) — New Cardinal Leonardo Ulrich Steiner, O.F.M., has again defended civil unions for homosexuals, claiming the question is merely a matter of financial security, not a question of moral theology, and that Christians cannot impose their morality on non-Christians.

The comments from the secretary general of the National Confederation of Bishops of Brazil, the archbishop of Manaus, and auxiliary bishop of Brasília, the nation’s capital, came during an interview with LifeSiteNews at the Vatican on the occasion of the prelate’s recent elevation to the College of Cardinals by Pope Francis.

“In 2014, Your Eminence advocated for the recognition of homosexual civil unions. So my question is, given that the teaching of the Church on the sinfulness of homosexual acts is part of the deposit of faith, how do you justify the legal recognition of such unions?” Steiner was asked by LifeSiteNews.

Invoking the support of Pope Francis on the issue, Steiner answered that it was a matter of obtaining financial security for homosexuals. “Many of them live together until the end of their lives without security,” the cardinal said. “They do not have assistance from health services. This is very serious. I have seen people going toward the end (of their lives) without money. Thus, you can see that Pope Francis has spoken many times about this.”

He then went on to claim that moral theology had no bearing on the question, insisting, “This is not about a fundamentally moral question. This is about a life. This is a question about a son of God.”

The cardinal was then challenged on his acceptance of the Church’s teaching. “Do you accept the sinfulness of homosexual acts?” he was asked. In response, Steiner said that Christians cannot declare homosexual acts a sin for those who do not have faith: “How do we say if it is a sin if they do not live the Christian faith?”

Steiner has previously supported homosexual civil unions. “There needs to be a dialog on the rights of shared life between people of the same sex who decide to live together. They need legal support from society,” the cardinal said in a 2014 interview with O Globo Magazine.

The pro-LGBT New Ways Ministry also reported in 2014 on Steiner’s comments, in which he justified civil unions by invoking “acceptance,” “respect,” “compassion,” and “sensitivity.”

“You could say,” Steiner declared, “that the Pope is echoing what the Catechism of the Catholic Church says about gay people: ‘They must be accepted with respect, compassion, and sensitivity. Every sign of unjust discrimination in their regard should be avoided.’ It’s understood that accepting them with respect, compassion and sensitivity means walking and being with the homosexual person and helping them understand, deepen and guide their condition as a son or daughter of God … ”

“Acceptance and walking with them are necessary to reflect on what fits or doesn’t fit the reality experienced by homosexual people and what, in fact, is rightfully theirs, for their own good and that of society.”

As previously reported by LifeSiteNews, “In 2014, Pope Francis said the Church needed to ‘consider’ such options as civil unions.”

“‘Civil states want to justify civil unions in order to regulate (normalize) different arrangements of cohabitation – prompted by the necessity of regulating (normalizing) economic aspects among people, for example in providing health insurance or benefits,” he said. “This consists of different kinds of living arrangements which I wouldn’t know how to enumerate with precision. We must consider different cases and evaluate each particular case.’”

“Again in October 2020, Pope Francis supported homosexual civil unions. ‘What we have to create is a civil union law,’ the Pope said in the documentary, ‘Francesco.’ ‘That way, they are legally covered.’”

“However, in 2003, then-Cardinal Joseph Ratzinger (Pope Benedict XVI) under the direction of Pope St. John Paul II, issued a clear and firm statement on the obligation of ‘all Catholics’ to reject the legalization of homosexual civil unions. The document, titled ‘Considerations regarding proposals to give legal recognition to unions between homosexual persons,’ states that ‘all Catholics are obliged to oppose the legal recognition of homosexual unions.’”

Pope announces pro-LGBT Brazilian bishop will be elevated to cardinal