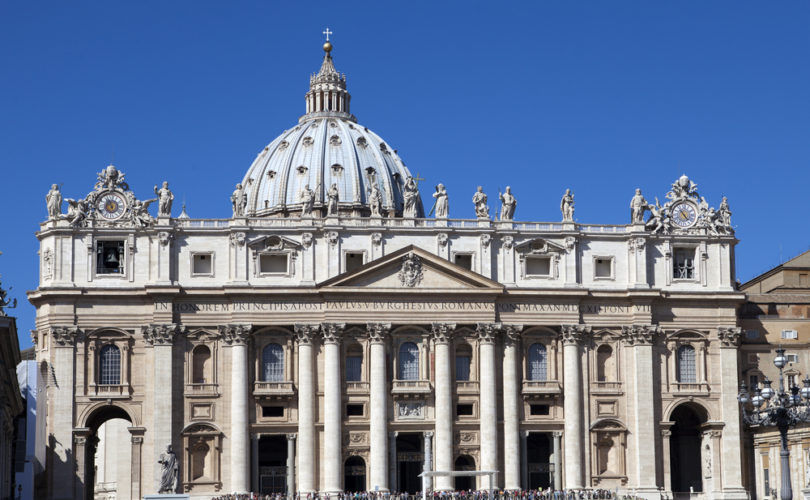 After three months of silence, the international financier brought in by Pope Francis to oversee Vatican financial reform claims he was forced to resign in June in a “frame-job” by insiders hostile to the reform.

Former Auditor General Libero Milone said Saturday he was speaking for the first time since his June dismissal because, “I couldn’t allow any longer a small group of powers to (defame) my reputation for their shady games.”

At the same time, two top Vatican officials claim they have “overwhelming evidence” against him regarding accusations of spying on superiors and others in his office.

Milone met in Rome with reporters Saturday from the Wall Street Journal, Reuters and two Italian outlets, newspaper Corriere della Sera and TV news channel SkyTg24, to give his account of the events surrounding his ouster only two years into his five-year appointment by Pope Francis.

He told of how he was forced out over fabricated charges by the “old guard” – deep-rooted bureaucracy that blocks any meaningful change.

While the Auditor General was supposed to report directly to the pope, Milone said he was “blocked” from seeing Pope Francis after April 2016. He described being increasingly isolated and hindered in his duties, and eventually forced to resign.

Cardinal Pell, named in 2014 by Pope Francis as head of the new Secretariat for the Economy charged with reorganizing Vatican finances, has faced intense opposition to the finance appointment.

The Guardian reported in 2016 that “hundreds of millions of euros” had been discovered by Pell “tucked away” and off the city-state’s balance sheets”.

The large international auditing firm PricewaterhouseCoopers (PwC) was appointed by Pell in Dec 2015 to conduct an in-depth audit of Vatican finances. The authority given to PWC to continue the audit was suddenly suspended by other Vatican authorities in April 2016.

Pell is currently on a leave of absence facing sex abuse charges in his home country. The cardinal strongly denies the charges, which have been likened to a personal witch-hunt with dubious handling by Australian authorities.

Milone indicated it may not have been a coincidence that Cardinal Pell’s abuse charges – decades old – hadn’t appeared until the last few years, a Crux report said, about the same time his attempts at major financial reform inside the Vatican were beginning to cause waves.

The April 2016 auditing contract suspension was the suspected result of reform pushback – something denied by the Vatican – and occurred amid questions of how the contract would affect the Auditor General’s role.

The Vatican then reinstated PwC two months later under a restructured arrangement that affirmed that primary responsibility for annual auditing would stay with the Auditor General’s office.

Concurrently last year, Pope Francis issued a motu proprio restoring several important financial functions to the Administration of the Patrimony of the Apostolic See (APSA) that had instead been given to Cardinal Pell’s department in 2014.

With the APSA responsible for much of the trouble that Cardinal Pell discovered in Vatican financial management – money-laundering, massive cost overruns, no-bid contracts, undervalued assets, leaked confidential information and the – undocumented expenses – the move was regarded as a blow to Cardinal Pell and financial reform.

The Vatican had announced Milone’s discharge as Auditor General June 20 without explanation for his departure just two years into his five-year assignment. A brief Vatican statement at the time said his exit was via “common agreement.” The Crux report said, however, Milone said he had been “intimidated” and forced to resign.

“I wanted to do good for the Church,” Milone said, “to reform it like I was asked, but they wouldn’t let me.”

“I believe the pope is a great person, and he began with the best of intentions,” he continued. “But I’m afraid he was blocked by the old guard that’s still entirely there, which felt threatened when it understood that I could tell the pope and (Vatican Secretary of State Cardinal Pietro) Parolin what I’d seen with my own eyes in the accounts.”

“He went against all the rules and was spying on the private lives of his superiors and staff, including me,” the archbishop said. “If he had not agreed to resign, we would have prosecuted him.”

The Vatican’s police chief, Domenico Giani, told Reuters there had been “overwhelming evidence” against Milone.

However neither Archbishop Becciu nor Giani gave specifics for their allegations.

The Holy See expressed “surprise and regret at Milone’s comments in a Sunday statement, and said the financial specialist was breaking a confidentiality agreement in speaking about the resignation.

Drawing attention to the Statutes of the office, the statement said the Auditor General was tasked with “analyzing the balance sheets and accounts of the Holy See and of its associated administrations.”

“It turns out, unfortunately, that the Office directed by Mr. Milone, going beyond its authority, illegally engaged an outside Company to carry out investigative activities on the private lives of representatives of the Holy See,” the statement said.

It then continued, “This, in addition to constituting a crime, irreparably damaged the trust placed in Mr. Milone, who, confronted with his actions, freely agreed to submit his resignation. Assurance is given, finally, that the inquiries were conducted with every scruple and with respect for the person.”

Appointed by Pope Francis to clean up Vatican finances

Milone was the first to hold the position of Auditor General after Pope Francis established the post in 2014, the office later given its statutes in 2015. The Auditor General’s primary job is to manage auditing of the dicasteries and other Holy See entities.

Milone is the former chairman and CEO of the global auditing firm Deloitte in Italy. Born in the Netherlands, he has worked as an accountant in top firms in Britain, Italy and the U.S. And he has worked as an auditor for the United Nations World Food Programme in Rome and major Italian companies including car manufacturer Fiat and the Wind telecoms group.

Pope Francis appointed Milone to the post in June 2015 to help overhaul Holy See finances as part of a campaign to ensure transparency, rein in financial oversight and eradicate abuse. Milone’s taking the newly created Auditor General position was said to signal a new commitment by the Vatican to financial accountability.

Milone’s abrupt departure this past June was seen as surprising, the National Catholic Register reported, because Milone had indicated no apparent regrets since taking on the auditor assignment. In fact, Milone had said he was ready to go “all the way with great enthusiasm” and that he was “highly motivated by the privilege of being available to the Pope.”

Milone told reporters Saturday he could not discuss the content of his Vatican auditing work, because it is still bound by confidentiality agreements. But he did talk about specifics surrounding his discharge from the Vatican, and his view of where things were with Pope Francis’s financial reform initiative.

Things began in 2015 when Milone suspected his computer had been accessed without his authorization. He brought in an external contractor, who determined that his computer had in fact been compromised, and his secretary’s computer infected with file copying spyware.

The Vatican claimed that Milone had unlawfully used the outside contractor to spy on Holy See officials.

He indicated Saturday he was being punished for opening an investigation of possible conflict of interest connected to an Italian cardinal he did not identify.

According to Milone he was summoned June 19 to Archbishop Becciu’s office and told that Pope Francis had lost faith in him and requested that he resign.

“I asked for the reasons, and was provided with a few that seemed incredible to me,” he said. “I responded that the accusations were false, and constructed to deceive both him and Francis; and that in any case I would speak about them with the pope. But the response was that this was not possible.”

Instead, Giani interrogated him.

They accused of him of misappropriation of funds, Milone said, presenting two receipts for payments to the external contractor for the counter surveillance services.

Milone said both receipts had his office’s stamp but only one had his signature, and he denied the allegations. He said he only agreed to resign after being threatened with jail if he did not confess.

Milone said he would prepare his resignation letter, but was told they already had one ready, Vatican blogger Sandro Magister wrote in L’Esspresso

“They went to get it,” Milone said. “I read it and said: I am not signing this. Because it was June 19, but the letter was dated May 12. We made a mistake: this is what they said.”

The statement was to expressly say the resignation had been given “freely,” he said.

Milone not permitted to talk to Pope

Milone recounted that he’d then written Pope Francis in July via a “secure channel,” to tell the pontiff he was the victim of a frameup, and that he was “astonished” at the “contemporaneous exit” of Cardinal Pell to Australia to answer his charges. He’s gotten no response from the pope.

On the day in June that Milone was called before Archbishop Becciu he said Auditor General staff members were held for hours into the evening, including secretaries, and that Vatican firemen were called in to break open a filing cabinet and desk.

He conceded the pope might have lost confidence in him, though this does not explain the way his exit was handled.

“The pope could have just called me and told me himself,” he said. “Instead, there was this whole staged scene that smacks of character assassination.”

Milone also reported that shifts toward more transparency and accountability made early on were being reversed, saying that resistance to change was expected when you change objectives but not management.

He also noted that if the pope asked him to return he would do so and finish the job.

“I was chosen by secretariat of state Pietro Parolin, Cardinal Reinhard Marx, and Cardinal George Pell. And the final decision lay with the pope,” Milone said. “I did not seek that post. And I accepted because I believed in the reforms of Pope Francis.”

Cardinal Pell on four Cardinals’ dubia: ‘How can you disagree with a question?’

The attack on Cardinal Pell: is someone trying to silence his voice for orthodoxy?