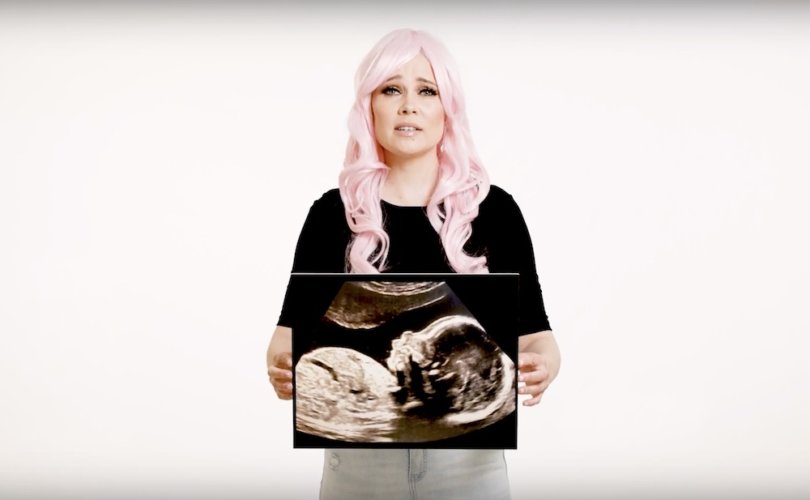 August 26, 2019 (LifeSiteNews) — A new pro-life video uses satire to destroy the claim made by pro-abortion activists that some babies are simply “better off” if they are terminated before being born.

The Ontario-based pro-life group Choice42 (Choice For Two) is back for another installment of its popular “Just Saying” video series, which uses satire to mock and discredit common pro-abortion arguments. The group’s latest video takes aim at the notion that it’s merciful to abort a baby born into trying circumstances.

Choice42 founder and director Laura Klassen once again assumes the role of a pink-haired abortion apologist, this time holding up various ultrasound photos and explaining the variety of medical and social challenges, from Down syndrome to single motherhood, that meant those babies were “better off dead.”

“This child was almost born into poverty,” Klassen’s character says, “but we killed her in the nick of time.”

“This one was missing a toe,” she says of another image. “That’s just weird. You’re welcome, baby! Saved you from a lifetime of hardship.”

“No one has ever risen above their circumstances,” she insists.

Eventually, the activist gets confused about which ultrasound depicts a baby conceived in rape, admitting, “I can’t really tell. They all look the same.”

“I wouldn’t wanna see anyone born into a less-than-perfect life,” she concludes. “That’s just not humane! We kill them because we care.”

Leftists such as MIT professor and Affordable Care Act (Obamacare) architect Jon Gruber have called abortion a “social good” because “marginal children who were not born as a result of abortion legalization would have systematically been born into less favorable circumstances,” whereas prenatal testing leads to aborting large percentages of Down syndrome children around the world.

Choice42’s “Just Saying” series has previously skewered the arguments for Down syndrome abortions, excluding men from the abortion debate, and the idea that a “magical birth canal” turns an ambiguously alive fetus into a true living being, as well as some abortion activists’ avoidance of the word “abortion” and the double-standard of protecting preborn puppies but not baby humans.

The organization also releases more serious videos on topics such as the firsthand accounts of women who choose life in difficult circumstances and works to help women by connecting them to crisis pregnancy resources.