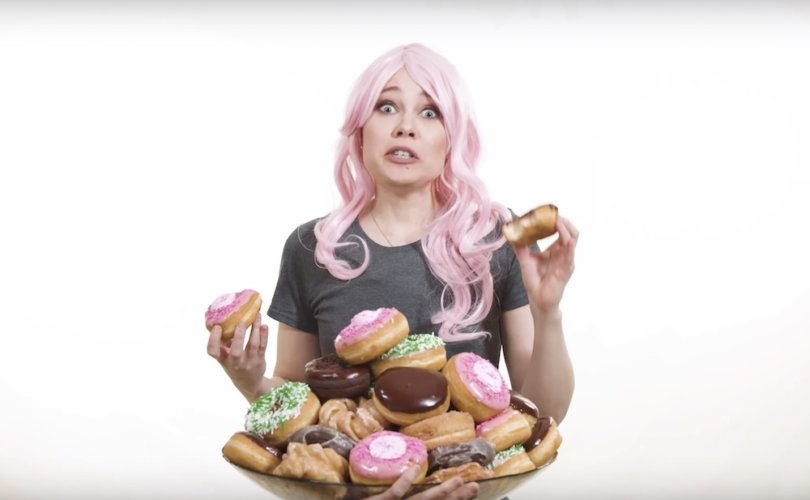 March 24, 2020 (LifeSiteNews) – Laura Klassen is back with the latest video in her “Just Saying” series, this time satirizing the popular pro-abortion talking point that abortion is justified because an abortion seeker never “consented” to getting pregnant.

Klassen, the founder and director Ontario-based pro-life group Choice42 (Choice For Two), dons a pink wig in each “Just Saying” installment to debunk common pro-abortion talking points with humor. The latest video has her character, a ditzy pro-abort, enjoying a massive tray of donuts, talking about how “consent to eating all the donuts is not consent to gaining weight. Winning!”

“There is no known correlation between eating sugary, carby goodness and gaining weight, right? Right?” she says. “OK, if I get fat from this, someone is gonna be in big trouble. And it’s not me!”

To make the analogy explicit, she continues that it’s just like how “no one could know that sex leads to pregnancy, duh!”

“Consent to sex is not consent to pregnancy” is a common defense of allowing abortion. Pro-lifers have responded by noting that virtually everyone who engages in consensual sexual intercourse knows pregnancy is a possible outcome, and by arguing that, even if the premise were true (or in cases such as rape, where the woman did not consent to anything), it would not logically follow that killing an innocent child is an ethical remedy.

Choice42’s “Just Saying” series has previously skewered the arguments for Down syndrome abortions, abortion as a mercy toward unwanted kids, excluding men from the abortion debate, and the idea that a “magical birth canal” turns an ambiguously human fetus into a true living being, as well as some abortion activists’ avoidance of the word “abortion” and the double standard of protecting preborn puppies but not baby humans.

The organization also releases more serious videos on topics such as the firsthand accounts of women who choose life in difficult circumstances and works to help women by connecting them to crisis pregnancy resources.