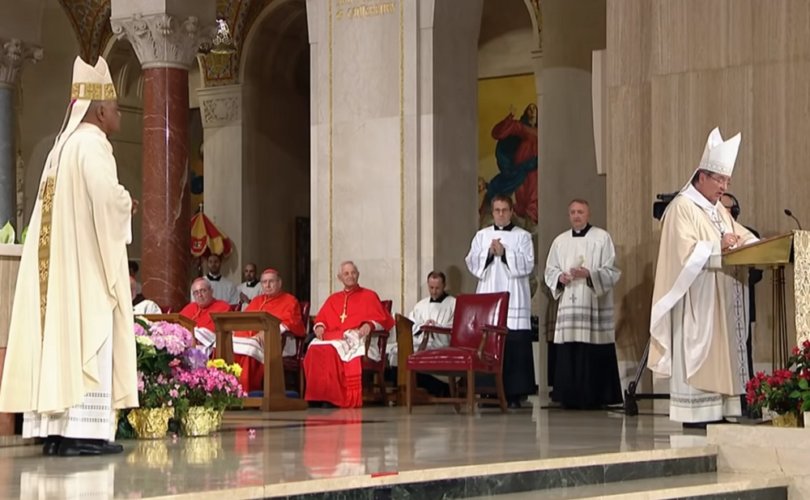 Abp. Wilton Gregory's installation Mass at the Basilica of the National Shrine of the Immaculate Conception, Washington, D.C., May 21, 2019.National Shrine via YouTube

WASHINGTON, D.C., May 22, 2019 (LifeSiteNews) — The installation Tuesday of Archbishop Wilton Gregory as the seventh archbishop of Washington, D.C. Tuesday conveyed the status quo in clergy sex abuse mishandling by Church hierarchy in having a cardinal who personifies that mishandling on the altar with Gregory.

Cardinal Roger Mahony, the retired archbishop of Los Angeles, took part in the installation Mass despite his controversial history of cover-up in abuse cases and his having been pulled from public duties in his archdiocese several years ago by his successor.

Catholics remain angry over Church leaders’ handling of the abuse scandal, and family advocate groups and victim advocates consider public appearances by the cardinal a slap in the face for victims of clergy sex abuse.

Also providing a face at the installation Mass for mishandling in the abuse crisis was Gregory’s predecessor, Cardinal Donald Wuerl.

The Washington archdiocese has been enmeshed in the abuse scandal, with the resignation of Wuerl in October amid charges he covered up several abuse cases while bishop of Pittsburgh and revelations since last year that Wuerl’s predecessor, former cardinal Theodore McCarrick, sexually abused children and adults as a priest in the New York archdiocese and as a bishop in New Jersey — the first time a cardinal had been dismissed from the clerical state for abuse.

Wuerl, who remains in good standing and remained as administrator of the Archdiocese of Washington after the pope accepted his resignation, was also criticized for denying at first that he knew of McCarrick’s reputation for sexual abuse, then later conceding he’d known of McCarrick’s sexual predation of seminarians.

Since Wuerl’s resignation, countless Catholics have prayed that new leadership in the Washington see would point in a new direction in the abuse crisis.

Gregory addressed the abuse crisis in his installation homily, pledging transparency and garnering applause, but the inclusion of Mahony, along with Wuerl’s high profile at the Mass, conflicted with the sentiment.

Wuerl gave the opening remarks for the installation Mass, the National Catholic Register reports, calling Gregory a “faith-filled pastor” and stressing, “Pope Francis sends us a bishop attuned to the signs of the times and endowed with great pastoral ability.”

In his homily, Gregory termed Wuerl a “cherished friend” and “a true Christian gentleman.”

The Register report said Wuerl’s appearance in the procession entering and exiting the Mass “was met with more subdued applause than that which greeted Archbishop Gregory.”

The installation Mass was held at the Basilica of the National Shrine of the Immaculate Conception in Washington and presided over by the apostolic nuncio to the United States, Archbishop Christophe Pierre, and attended by eight cardinals, 50 bishops, 100 deacons, and 300 priests.

That's a conga line from hell right there. pic.twitter.com/DSg90FPgC0

Political figures, including counselor to the president Kellyanne Conway, were also in attendance.

Among the cardinals present were Blase Cupich of Chicago and Joseph Tobin of Newark, New Jersey.

The two cardinals also conjure reminders of the sex abuse scandal, as former U.S. apostolic nuncio Archbishop Carlo Maria Viganò alleged in his bombshell testimony last August on the Church’s clergy sex abuse scandal that McCarrick played a hand in the elevation of Cupich and Tobin to the office of cardinal.

While Mahony had acted to address abuse in some cases during his tenure in the Archdiocese of Los Angeles, in leaked emails, Mahony was shown in other cases to have acted along with his top aides in the interest of preventing disclosure and controlling public perception instead of protecting children.

Mahony, who led the L.A. archdiocese from 1985 until his 2011 retirement, was censured in 2013 by his successor, Archbishop José Gómez, after the court-ordered release of archdiocesan files following a 2007 sex abuse lawsuit settlement that constituted the largest sex abuse payout in Church history (some $660 million).

The documents showed that Mahony had concealed his knowledge of abusive priests, protected offending priests from prosecution, and transferred abusers after they’d received counseling, at times out of state to skirt reporting laws, where they could abuse again.

After the release of the archdiocesan files, Gómez publicly removed Mahony going forward from having “any administrative or public duties” in the Archdiocese of Los Angeles. Shortly thereafter, despite the controversy, Mahony would take part in the conclave that elected Pope Francis.

Mahony, who has reportedly apologized for his handling of sex abuse cases, met with victims, and set up a victims’ assistance office, remains a priest in good standing.

He has flouted Gómez’s order and reportedly continued to confer Confirmations in the archdiocese. He also spoke at the Los Angeles Religious Education Congress in March, held in the neighboring Diocese of Orange.

Gregory, 71, is the first African-American archbishop to head the Washington archdiocese. He was president of the U.S. Conference of Catholic Bishops from 2001 to 2004, during the early period of the Church’s sex abuse crisis, and supervised implementation of the USCCB’s Dallas Charter for the Protection of Children and Young People, which McCarrick had worked on as well.

The charter is controversial for providing guidelines to deal with abusive priests but leaving abusive bishops unchecked.

Also during his tenure as USCCB president, Gregory, along with McCarrick, misrepresented the contents of a letter from Cardinal Ratzinger, then the prefect of the Congregation for the Doctrine of the Faith, which directed American bishops during the 2004 presidential campaign to deny Communion to Catholic politicians who support abortion.

The two bishops paraphrased the letter, telling their fellow bishops they should use their own judgment regarding pro-abortion politicians. The U.S. bishops would ultimately vote 183-6 to leave this decision up to each respective diocese.

While head of the Atlanta archdiocese, Gregory personally invited LGBT-affirming Jesuit Father James Martin to present there; allowed the Shrine of the Immaculate Conception to operate as a center for LGBT events; and appointed the shrine’s pastor, who has participated publicly in Atlanta’s gay subculture, as a spiritual director for victims of sex abuse for the archdiocese.