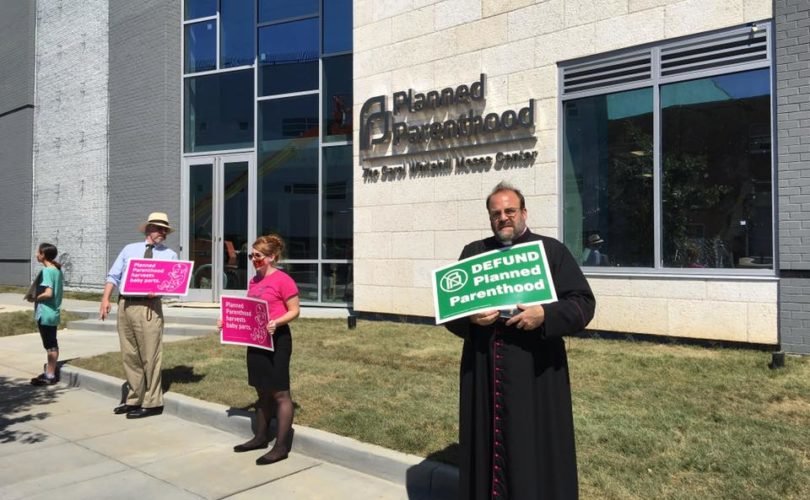 WASHINGTON, D.C., August 31, 2016 (LifeSiteNews) — Pro-life activists and a priest in a long black cassock were unfazed by scorching heat and humidity on Sunday as they prayed outside Planned Parenthood’s new “flagship” abortion center that is slated to open as early as this week.

The group of 15 or so, including Monsignor Charles Pope of the Archdiocese of Washington and Rev. Patrick Mahoney of Church on the Hill DC, the Christian Defense Coalition, and Abortion-Free DC stressed their belief that prayer works and they won’t give up hope on shutting down the abortion facility even if it opens.

“I am prayerfully protesting the imminent opening of a Planned Parenthood mega Center not far from my parish in Washington DC,” Monsignor Pope wrote on Facebook. “Please join me in prayer that this terrible facility will never in fact open; pray also that many thousands of children will be saved. Please Lord, not here, not anywhere! Last year Planned Parenthood reports having killed 327,653 children through abortion nationwide. It calls this slaughter ‘abortion services.’”

The Planned Parenthood is located next to a public charter school in the northeast quadrant of the city and takes up about half a street block. The abortion giant began building the multimillion dollar facility a little over a year ago.

In June, the Archdiocese of Washington hosted a pro-life Mass and rosary procession from a local parish to the construction site. The construction site also drew hundreds of protestors before the 2016 March for Life and has been the location of two 40 Days for Life campaigns.

Last week, the contractor who installed the abortion facility’s plumbing said on camera that he supports the Ku Klux Klan and would have no problem installing plumbing in an extermination camp.

“I'm from the south. I like them,” he said in reference to the KKK.

“It is outrageous and disgraceful that Planned Parenthood would have a racist and supporter of the KKK working on their new mega center in Washington, D.C.,” Rev. Mahoney said in a statement. “It is especially troubling when you consider this organization receives hundreds of millions in taxpayer funding, yet hires people who embrace intolerance, hatred and bigotry while working in the very heart of our nation's capital.”

The Presbyterian minister called on Planned Parenthood to “immediately terminate all ties with this plumbing contractor and give the fees paid to him and his company to an organization that promotes racial reconciliation and healing.”

“We also ask that Hillary Clinton, who supports Planned Parenthood with open arms and their Founder, Margaret Sanger, to condemn the fact that they have hired this KKK supporter who is working on their clinic in Washington, D.C.,” Rev. Mahoney continued. “Sadly, the racist and eugenicist agenda of Margaret Sanger continues to live on with Planned Parenthood. Whether it is the violence of abortion or the violence of unleashing dogs and fire hoses on African-Americans, their focus still remains rooted in the crushing of human rights and equality.”

“Simply stated, whether it is killing innocent children in their mother's wombs or hiring those who support the racist policies of the KKK, Planned Parenthood continues its legacy of injustice and violence,” Operation Rescue President Troy Newman said.

“It is an outrage that Planned Parenthood would hire a KKK supporter to install the 33 sinks in its new DC mega center,” added Catherine Glenn Foster, president of Sound Legal Group. “But given Planned Parenthood's 100-year history of racism and misogyny, we should not be surprised that a supporter of an organization that would flush human rights down the toilet would be in league with the organization that will be washing babies' blood down the sink.”

The company that Planned Parenthood hired to build its new abortion facility is owned and operated by a Catholic, Robert T. Pizzano Jr.