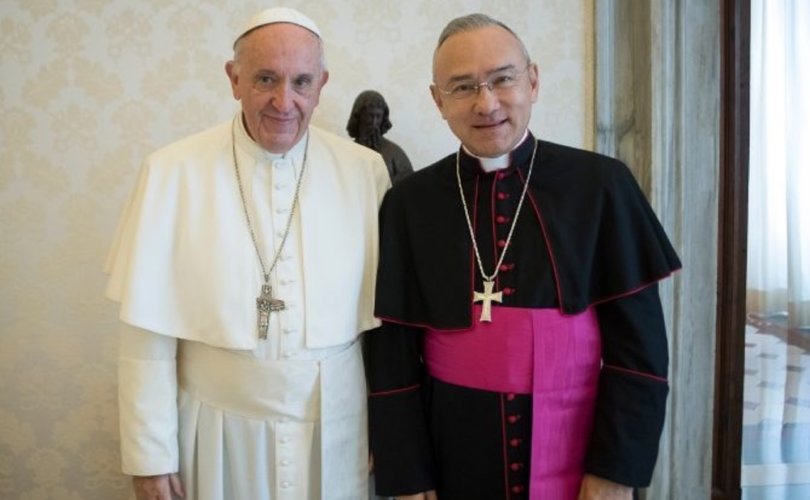 Insiders say it is also highly likely that Rodriguez Maradiaga had a hand in the appointment of Venezuelan Archbishop Edgar Peña Parra, who takes over from Cardinal Giovanni Angelo Becciu in the powerful role of Substitute for General Affairs in the Secretariat of State, a key position in the Roman Curia similar to a chief of staff.

The close connections with the two prelates are of concern given the widespread homosexual misconduct at the major seminary in Cardinal Maradiaga’s archdiocese of Tegucigalpa, and Pineda’s resignation as auxiliary bishop of the same archdiocese amid allegations of sexual abuse of seminarians and financial impropriety.

It also comes in the wake of a sexual abuse crisis in Chile and at the boarding schools of UK Downside and Ampleforth Abbey, and the August 14th release of the Pennsylvania Attorney General’s report, detailing decades of abuse cover-up by US Bishops.

Reliable sources: new sostituto +Pena Parra is “very close friend” of both ++Maradiaga and his disgraced auxiliary Pineda. Source: “This appointment bears hallmark of Maradiaga who still has great power” and with “single blow” he’s secured his own “throne” & Pineda’s successor pic.twitter.com/DTBHk5AnMJ

As a diplomat in the nunciature in Honduras 2002-2005, new sostituto +Edgar Peña Parra forged v close friendships with Pineda and ++Maradiaga and worked to have Pineda appointed auxiliary in 2005. As sostituto he’s expected to do everything Maradiaga asks him to do, say sources. pic.twitter.com/TWEnnSKTcJ

In subsequent comments to LifeSiteNews, Pentin quoted one of the sources as saying that he predicted four consequences of this appointment. First, the Vatican will remove the current nuncio, Tanzanian Archbishop Novatus Rugambwa, who has been a stalwart in strongly resisting the corruption and scandal in the Tegucigalpa archdiocese. “Rodriguez Maradiaga doesn’t like him, as he’s the only one capable of saying the right thing and implementing it,” said the source.

A second consequence the source predicted is that Rodriguez Maradiaga, 75, will “secure his reign for another five years.” A third outcome is that once everything has calmed down, “he will bring back Pineda, converting him into the next archbishop of Tegucigalpa.” And finally, the source predicted the cardinal will “maintain the privilege of continuing to appoint bishops of his choice who will always be his slaves.”

“Ultimately, the whim of a homosexual (Pineda) determines the choices of an entire church,” the source said. “It makes one vomit. He will do everything that Maradiaga asks him to do.”

Another informed source confirmed that Peña is “a very good friend of Rodriguez Maradiaga and Pineda,” and that Pineda “came specially to be at the ceremony of Peña when nuncio. They are very, very close.”

While the fruits of Peña’s appointment remain to be seen, concerns over the new nomination are heightened given the role the Substitute plays in directing the daily affairs of the Secretariat of State, at a time when the Vatican is facing calls from clergy and laity to purge the Church of corruption and coverup.

Pentin said this is the last straw for many of the faithful in Honduras who are “longing for Cardinal Maradiaga to step down.”

The sources also partly put the scandals down to a collapse in numbers of faithful in Honduras. Over the past 22 years, the country’s Catholic population has plummeted from 76% to 37%.