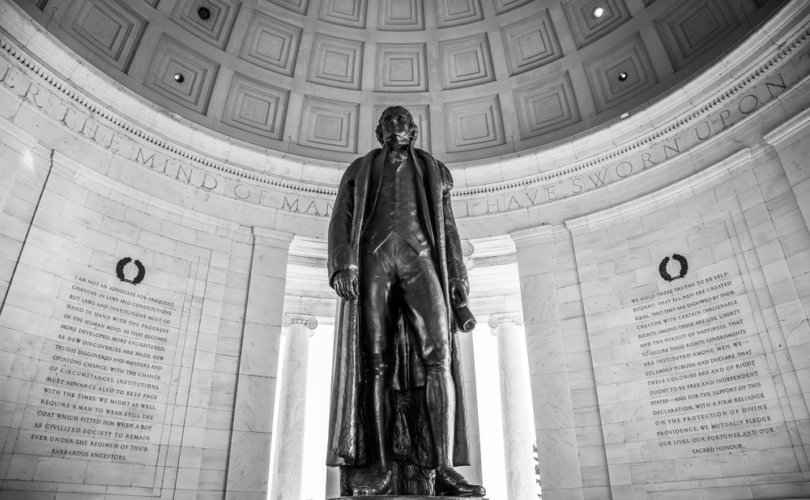 TALLAHASSEE, Florida (LifeSiteNews) – Left-wing detractors of Florida Republican Gov. Ron DeSantis are up in arms over new training materials for civics educators that contradict prevailing dogma on the American founding and Constitution, including how the nation’s Founding Fathers really viewed the relationship between religion and government.

Working with conservative Hillsdale College, a private school in Michigan that takes a more classic view of education, the DeSantis administration has developed training materials for public schools meant to counteract what the governor calls “woke” propaganda, and replace it with material that fosters understanding and appreciation for the foundations of America’s system of government.

Among the materials is a statement declaring it a “misconception” that the Founders “desired strict separation of church and state and the Founders only wanted to protect Freedom of worship,” when in reality they “expected religion to be promoted because they believed it was essential to civic virtue.”

The Washington Post’s Lori Rozsa wrote that teachers who attended a voluntary presentation of the materials claim it “sanitizes history and promotes inaccuracies” with “cherry-picked” information.

“My takeaway from the training is that civics education in the state of Florida right now is geared toward pushing some particular points of view,” Broward County teacher Richard Judd is quoted as claiming. “The thesis they ran with is that there is no real separation of church and state.”

In fact, the phrase “separation of church and state,” frequently invoked in rhetoric promoting legal abortion and LGBT causes, and opposing prayer or religious imagery on public property, is itself a notorious example of a quote removed from its original context.

The phrase comes not from the Declaration of Independence or U.S. Constitution but from a letter Thomas Jefferson wrote to the Danbury Baptist Association on January 1, 1802, reassuring the group of his belief that “religion is a matter which lies solely between Man & his God, that he owes account to none other for his faith or his worship, that the legitimate powers of government reach actions only, & not opinions.”

“I contemplate with sovereign reverence that act of the whole American people which declared that their legislature should ‘make no law respecting an establishment of religion, or prohibiting the free exercise thereof,’ thus building a wall of separation between Church & State,” Jefferson continued. “[A]dhering to this expression of the supreme will of the nation in behalf of the rights of conscience, I shall see with sincere satisfaction the progress of those sentiments which tend to restore to man all his natural rights, convinced he has no natural right in opposition to his social duties.”

When taken literally, “‘separation of church and state” is accurate shorthand for one of the practical effects of the First Amendment: recognizing that the church and the state are two distinct entities, and neither may control the affairs of the other. Today, however, left-wing activists claim that it means religious ideas and values cannot in any way inform, influence, or be recognized by government, and that any expression of faith on government time, on government land, or with government resources is illegal, no matter how benign or voluntary.

That interpretation is without basis in the words or actions of the Founders, including Jefferson, who while being far from a conventional, dogmatic Christian viewed religion as vital to America’s success (as did many of the Founders).

“[C]an the liberties of a nation be thought secure when we have removed their only firm basis, a conviction in the minds of the people that these liberties are the gift of God?” Jefferson asked in his Notes on the State of Virginia. “That they are not to be violated but with his wrath? Indeed I tremble for my country when I reflect that God is just: that his justice cannot sleep for ever.”

Though he expressed reservations about doing so as president, Jefferson also signed a proclamation for a “day of public and solemn thanksgiving and prayer to Almighty God” in his capacity as Governor of Virginia.

“The very same Congress (specifically, the First Congress) that approved the language of the Establishment Clause [of the First Amendment] also provided for the appointment of chaplains in the U.S. Senate and House of Representatives,” the American Center for Law & Justice noted. “In fact, on the very same day that it approved the Establishment Clause, the First Congress also passed the Northwest Ordinance, providing for a territorial government for lands northwest of the Ohio River, which declared: ‘Religion, morality, and knowledge, being necessary to good government and the happiness of mankind, schools and the means of education shall forever be encouraged.’”

Despite modern public schools’ left-wing tilt, not every Sunshine State teacher is hostile to the new standards.

“We need excellence in civics education, and I think Governor DeSantis’s program is a model for the nation,” Lopez said. The popularity of that sentiment within and beyond Florida has contributed to interest in the governor as a possible candidate for the Republican presidential nomination in 2024.