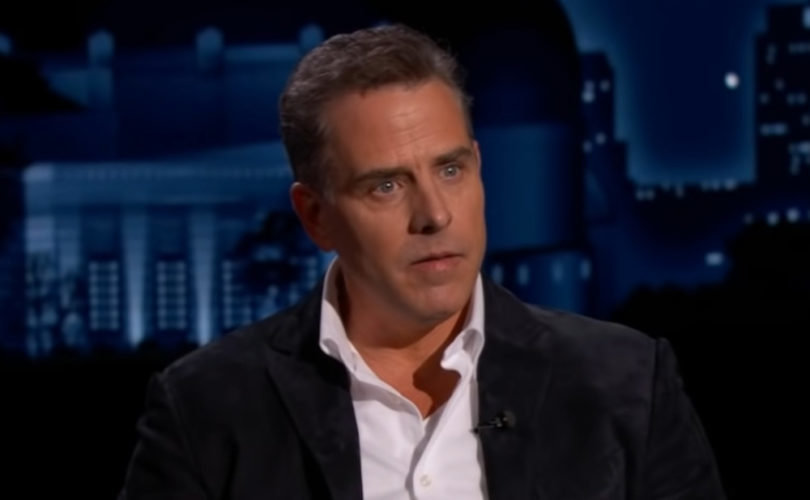 Texts from Hunter Biden’s laptop show that the Secret Service monitored Hunter, then an active crack cocaine addict, while he was in a hotel in Los Angeles. The texts were provided to LifeSiteNews by Jack Maxey, former co-host of Steve Bannon’s War Room, and were featured in a report by the Daily Mail confirming the authenticity of the Hunter Biden laptop.

“I’m in lobby come down,” a Secret Service agent texted Biden on May 28, 2018. Joe Biden’s family had ceased to merit Secret Service protection by that time, as the former vice president had left office more than one year prior.

“Come on H this is linked to Celtic’s account. DC is calling me every 10. Let me up or come down. I can’t help if you don’t let me H,” the agent added. “Call the front desk desk now H or I will have to assume you are in danger and we will have to make them give us keys.”

“I am coming down right now,” Hunter responded. “We’re at your door. Open it,” the Secret Service agent said. Local California news referred to the same agent as a “former U.S. secret service executive” in an announcement just days later.

The Los Angeles incident, which Maxey said corresponds with photos taken by Hunter Biden at the Sunset La Cienega Hotel, is the second known instance of inappropriate Secret Service coverage provided to Biden between his father’s stints in the White House.

Last Thursday, a report by POLITICO claimed that Secret Service agents tried to confiscate the purchase record of a gun illegally bought by Hunter Biden in October 2018. The report backed up texts written by Hunter that detail the Secret Service’s alleged involvement in an incident in which his former sister-in-law and girlfriend, Hallie, tried to dispose of the firearm.

“She stole the gun out of my truck lock box and threw it in a garbage can full to the top,” Hunter Biden said in a text from his laptop dated to January 2019. “Then told me it was my problem to deal with.”

“Then when the police the FBI the secret service came on the scene she said she took it from me because she was scared I would harm myself due to my drug and alcohol problem and our volatile relationship and that she was afraid for the kids,” he continued. Hunter Biden has tried to claim that the event never happened.

Republican Sens. Chuck Grassley of Iowa and Ron Johnson of Wisconsin have pushed the Secret Service for answers about their involvement in the gun episode since the release of the POLITICO report.

“In light of the recent press report, please provide all records relating to your agency’s involvement in the alleged October 2018 incident with respect to Hunter Biden’s firearm no later than April 8, 2021,” the Republicans wrote in a recent letter to the director of the Secret Service.

“The Secret Service must explain, in detail, the steps that it took to respond to the committees, including whether your office communicated with any current or former personnel that may have been connected to this incident,” they wrote. The Republican senators have been conducting an ongoing probe of the Bidens that turned up new information about shady foreign financial arrangements of multiple members of the Biden family.

Running coverage for the Bidens

In a conversation with LifeSite’s Dr. Maike Hickson, Maxey discussed Hunter Biden’s disturbing brush with the law in Connecticut in 2019. “There’s also another example where he is in Naugatuck, Connecticut, at a motel there, and he’s gone to the bank to get money to purchase cocaine and the drug dealer’s supposed to arrive at the motel,” Maxey said. Someone named “Crystal” then appeared to text the drug dealer from Biden’s phone.

Biden messaged the dealer the following day, saying that police officers had come to the motel room while he had gone to the bank. Biden never seems to have been charged in relation to the event. Officers had caught him with drug paraphernalia in Arizona in 2016, although he was never prosecuted for that either.

“The thing is that this guy has more lives than a cat,” Maxey said. “And what is very troubling to me from a moral standpoint, we have to remember that Joe Biden … wrote the law that made possession of five grams of crack cocaine equal to 500 grams of powdered cocaine,” he said, referring to the Anti-Drug Abuse Act of 1986 that Joe Biden sponsored and helped write while in the U.S. Senate.

“And this sent hundreds of thousands of African-American men to jail throughout the 90s all the way into the present day. And yet Hunter is using these types of quantities of crack cocaine on an almost daily basis,” Maxey continued. “Secret Service is running coverage for them, and there are regular Americans who’ve been rotting in jail for much less egregious drug crimes than Hunter just committed on a daily basis.”

Maxey also slammed the Bidens for their numerous, potentially illegal business dealings, which he said “compromise” every American. “This drug and alcohol and sex issues with Hunter is really kind of a salacious smokescreen and obscures the more horrifying reality, which is the compromise of every single American’s safety because of the compromise of the president of the United States,” Maxey said.

The “biggest problem” posed by the Bidens “is Hunter and his father and (James Biden) and the family selling the access of Joe Biden’s elected office to the Communist Chinese, to the Ukrainians, the various Eastern European undesirables,” in addition to “multiple attempts in Latin America to do the same,” he added.

Members of the Biden family, including Hunter, Joe, and Joe’s brother James and sister-in-law Sara, have been linked to legally questionable multimillion-dollar business arrangements on at least five continents, according to the now-verified Hunter Biden laptop. Last month, LifeSiteNews revealed that Hunter Biden and a Chinese executive who previously had met Joe Biden may have tried to set up a meeting with Chairman Xi Jinping and prospective business partners in 2015.