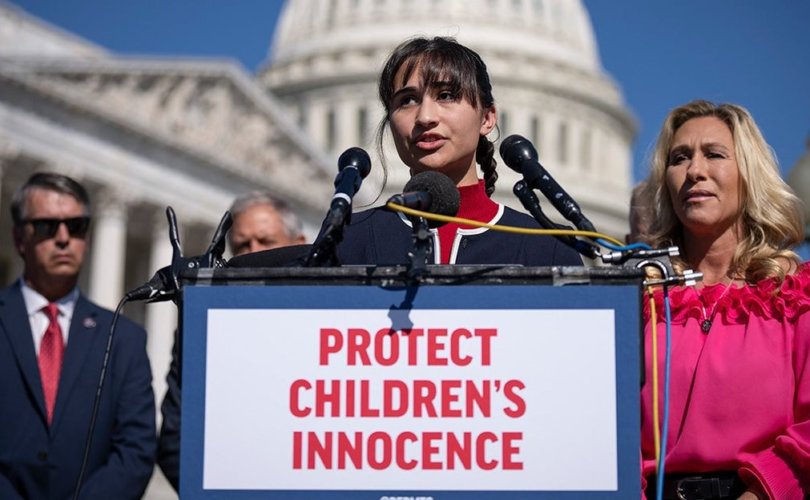 (LifeSiteNews) — A group of detransitioners has come together to support one another and publicly speak out against “gender affirming care.”

The organization, called Detrans United, was announced October 7 by 18-year-old Chloe Cole. She explained that the initiative was “inspired by the criminal letter” sent to Attorney General Merrick Garland by the American Academy of Pediatrics (AAP) and the American Psychological Association (APA) demanding action be taken against those who publicly oppose the LGBT agenda.

Consequently, the group’s “first initiative” was “a letter written on behalf of detransitioners” to Garland.

I am announcing a new organization created by myself and fellow detransitioners called Detrans United. We were inspired by the criminal letter written by the AAP and APA to AG Garland to make our first initiative a letter written on behalf of detransitioners. OUR LETTER: pic.twitter.com/Fq0sePLRLV

The letter describes the pressure placed upon children and parents to seek “gender affirming care” as well as the reality that those who pursue this course of action often regret their decisions.

“We didn’t know better,” the group wrote. “We were young, and we trusted our doctors. Our parents were also misled. They were told the common myth that if they did not ‘affirm’ our new identities, which entailed fully approving our medical transition, then we would likely commit suicide. Given these options, what loving parent wouldn’t choose to transition their child? This is not informed consent, but a decision forced under extreme duress.”

The letter also emphasizes that many of the group members were “young teenagers when we decided, on the direction of medical ‘experts,’ to pursue irreversible hormone treatments and surgeries to bring our bodies into closer alignment with what we thought was our true ‘gender identity.’” Many of the former “transgender” individuals also suffered mental illnesses and childhood trauma in the past. However, because “gender” was suggested, no other problems were addressed except the confusion over one’s gender and sex.

“Most detransitioners choose to remain silent or anonymous, because unlike the joyful and supportive communities that welcome all who transition, no such loving community awaits us,” the letter continues. “Instead, we are routinely harassed and browbeaten into silence for being an inconvenience to popular narratives around ‘gender.’ But our growing population is becoming impossible to ignore.”

Despite several countries having determined that “the risks and uncertainties [of transgender care] outweigh any known benefits,” major medical associations in the U.S. “fully endorse” this treatment method and do not allow for “exploring possible underlying factors causing [youth] dysphoria.”

The group denounces the letter from the AAP and APA as “nothing more than an attempt to silence the reasonable voices of concerned critics.”

“We condemn all violence, threats of violence, and intimidation directed at physicians and hospital staff without caveat,” they continue. “But we also cannot ignore the harms being carried out against countless children in the name of ‘gender affirmation’ that constitute much more than mere threats — we bear the literal scars of this medical violence.”

The organization concludes its letter by stating that “truth is a prerequisite for justice” and insisted that silencing those speaking the truth is not a solution to the ongoing issue. The letter is signed by seven “detransitioners.”

According to its website, Detrans United is “a new support network and advocacy group created by detransitioners, for detransitioners.” The goals of the organization are to provide support to “detransitioners” by connecting them “with each other, mental health professionals” and “medical malpractice lawyers.”

Research and factual evidence regarding the dangers of “gender affirming care,” a platform for detransitioners to “tell their stories,” and more advocacy letters to “help influence policy” are included in the group’s future plans.

The organization is accepting donations to fund various needs such as medical malpractice suits and hosting events. Detrans United also invites formerly “transgender” individuals and those interested in hearing updates on this initiative to contact the group.

Gender dysphoria cases among US children tripled over five years