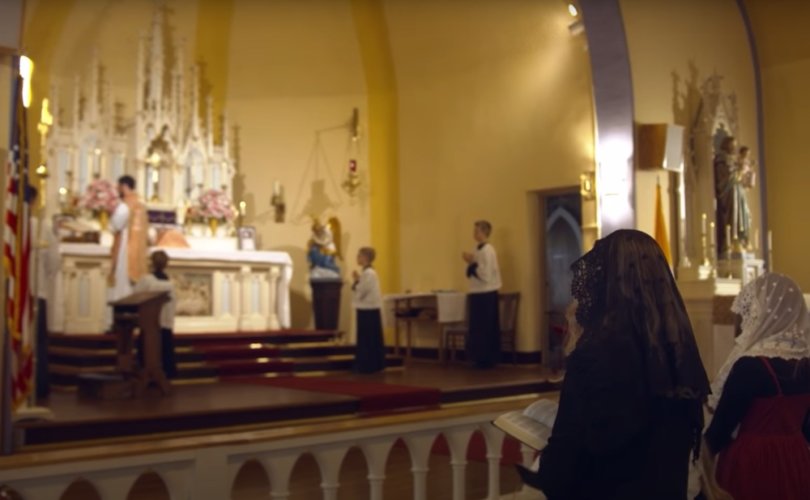 Mass of the Ages: The Latin Mass TRILOGY / YouTube

(LifeSiteNews) — Catholic priests and laity have shared why they treasure the Traditional Latin Mass (TLM) in a recently released promo video for upcoming film Mass of the Ages.

Flourishing parishes, “overwhelming” beauty, and the supplying of a “solid foundation” of faith are just a sample of reasons why Catholics hold the Latin Mass dear.

“Actually, my first Latin Mass was [the] third week of Lent and I just, I wept. I wept. I mean, it was, snot, tears, the whole nine yards,” shared one priest.

“I wept almost to the degree I wept when I was first ordained. It was just overwhelming to me how beautiful it was. It was so simple, so profound. And I realized that I was actually able to pray.”

“It’s not, ‘I’m rejecting something’ or ‘I’m resisting something,’” he continued. “There really is, ‘Now I’m embracing the fullness of the faith.”

Another priest pointed out that the “fruits” of faith found at Traditional Latin Masses are so abundant, that they are a testament to the “good tree” of the traditional liturgy.

“We judge a tree by its fruits. And when we look at the numbers, we don’t need to study a lot about it, and to argue about the differences,” he said. “Let’s simply look at the numbers and who the church[es] are filled with. And we see in places where the Traditional Mass is being celebrated, we see a lot of young families, lots of baptism, lots of conversions.”

Former model and internationally recognized Catholic speaker and author Leah Darrow — who has publicly shared that she initially “walked away” from the TLM because of an “unpleasant” experience she had — is now an ardent supporter of the TLM.

Super Bowl Champion Kicker Harrison Butker, who at times serves his local TLM (and is second in NFL history in career field goal percentage), testified, in an address to bishops, that he, like “so many,” has “fallen in love with these holy sacraments.”

“They’ve completely revitalized our faith,” said Butker. “To think of a world where my children won’t be able to experience this beautiful liturgy, a liturgy that was developed by our fathers, that was able to feed so many great saints, is absolutely heartbreaking.”

Cameron O’Hearn, director of the three-part documentary Mass of the Ages, previously explained to LifeSiteNews that the film’s personal testimonies “investigate the power of the old Mass and the profound effect it has on our spiritual lives.”

The film is to help achieve that in part through “stunning cinematography.” The film’s website shares, “Our main priority is to showcase the beauty of the Mass — where Heaven touches earth.”

In an interview with Dr. Taylor Marshall, O’Hearn explained that another of the main goals of the film is to “draw the connection between worship and belief.” He drew attention to the Latin expression Lex Orandi, Lex Credendi, which means, “The law of prayer is the law of belief.” In other words, how you pray affects what you believe.

“If you don’t think Lex Orandi Lex Credendi is true, that the way we pray actually affects what we believe, listen to this statistic. And it should break your heart if you believe what the Catholic Church teaches,” said O’Hearn.

“In Dr. Peter Kwasniewski’s newest book, Reclaiming Our Roman Catholic Birthright, he cites this study done by a chemist priest on receiving Communion in the hand. He took unconsecrated hosts and a black glove, and did about 100 ‘communions’ in the hand. And on average, there’s 108 particles that were discarded accidentally, out of 100 receptions,” O’Hearn continued.

“So on average, every single reception of the Eucharist on the hand discards the Almighty God onto the carpet. It’s just vacuumed up. That’s just a fact that’s been demonstrated.

“So, if that’s not breaking your heart, you have to ask yourself a question like, maybe, is the way I’m praying on Sunday having an effect on what I actually believe?”

“The benefit [is] going to be to reach an audience like that, that we haven’t been able to do before, with a film like this. I think it’s going to be an incredible catalyst for change,” said O’Hearn.