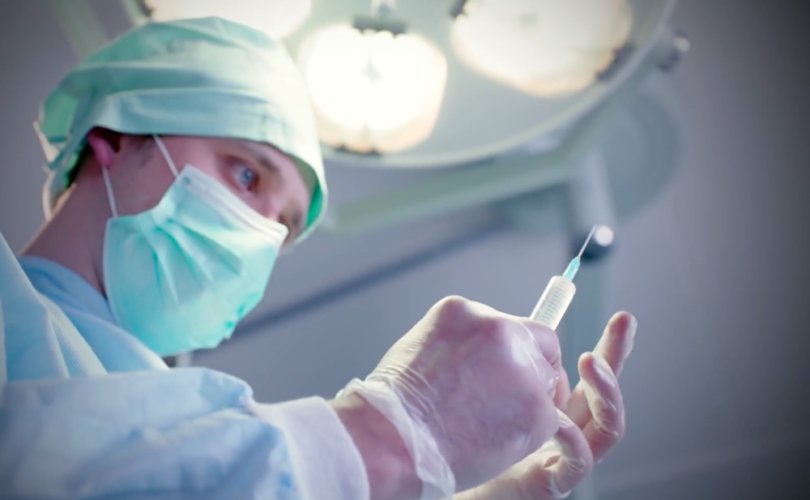 LONDON, Ontario, April 18, 2018 (LifeSiteNews) – Nineteen months ago doctors attempted to pressure a Canadian mother into having her sick 25-year-old daughter with cerebral palsy euthanized during an emergency hospital stay.

Sheila Elson recalls in a forthcoming documentary how a doctor in Newfoundland said her daughter Candice Lewis was going to die. The doctor suggested that euthanasia was the best way forward.

Elson was sitting beside her daughter as she retold the story. When she got to the part about the doctor suggesting euthanasia, Candice burst into tears.

“Don’t cry, it’s all done now, it’s over,” says Sheila Elson, hugging her daughter, who pulls off her glasses to wipe her eyes. “We just don’t want it to happen to anybody else, hey?”

It’s a moving moment in “Fatal Flaws,” a documentary on legalizing euthanasia created and produced by Ontario-based Dunn Media in association with the Euthanasia Prevention Coalition.

The documentary features stories such as Lewis’s, and “incredible stories that have never been told before,” including “shocking” testimony by Margreet, “whose mother was euthanized in the Netherlands without consent,” he told LifeSiteNews.

Fatal Flaws also features unedited interviews with leaders of the “death lobbies in the Netherlands and the United States,” such as the Right to Die Federation and Death With Dignity.

“The film really undoes what the euthanasia lobby has been selling. They say it’s about autonomy,” Schadenberg told LifeSiteNews.

In Lewis’s case, Elson took her daughter to Charles S. Curtis Memorial in St. Anthony, Newfoundland in September 2016 for treatment for seizures.

The emergency doctor, identified in the media as Dr. Aaron Heroux, allegedly said Lewis’s kidney was displaced and “the lower part of her lungs had collapsed,” she told filmmaker Kevin Dunn.

The next day, the doctor “took me out in the hallway and stood me up against the wall and told me about assisted-suicide death [and that it] was legal in Canada,” Elson related.

She said she wasn’t interested, but the doctor “told me that I was being selfish and he wanted to assist me in doing this.”

Worst of all, Lewis “heard everything,” Elson related. But “not once did she ever say, ‘I want to end my  life.’ Not once.”

On the contrary, Lewis related in the film how she told the doctors: “I don’t want to go.”

And she pulled through, and a year later, was “back doing what she loves most, painting and being with her family,” notes Dunn.

As well as traveling to Newfoundland, Dunn and his crew visited four countries and logged in over 50,000 km over two years. He was seeking an answer to the “most fundamental philosophical questions of our time: should we be giving doctors — or anyone — the right and law to end the life of another human?” Added to this is the question: “how do these laws affect society over time?”

In the particularly tragic case of Aurelia Brouwers, the 29-year-old physically healthy Dutch woman told Dunn she’s “had a death wish for about six years and I’ve tried to get euthanasia for about four years…and I just want to fight for it.”

The Dutch government subsequently approved Brouwers for euthanasia for psychiatric reasons. She was euthanized January 26, 2018.

“I have to ask: Who has failed her?” asks Dunn.

Fatal Flaws “is not out to demonize doctors, advocates – or anyone for that matter. In fact, most doctors want nothing to do with assisted death. However a small minority do, and the number is growing,” Dunn writes on Fatal Flaws website.

“Rather, this film is about the growing adoption of a new cultural philosophy, one that has the potential to wreak havoc on society’s vulnerable. And let’s face it, we’re all vulnerable.”

Fatal Flaws is set to premiere on May 8 at the Ottawa Little Theatre.

But Schadenberg says EPC needs about $25,000 to finish the project. He’s been forced to send out an emergency appeal to supporters to make up the shortfall.

“As the film nears completion, once again we face a severe financial crunch,” Schadenberg wrote on EPC’s website. “We have staff and office expenses, and have had to make difficult decisions to enable the completion of Fatal Flaws.”

To cover the $25,000 shortfall on the documentary, EPC is seeking both donations, which can be made here, and short-term, no-interest loans.

EPC is sponsoring the May 8 premiere, which will be followed by a live recorded round-table discussion on the dangers of legalizing euthanasia and assisted suicide. Tickets are $10, and can be purchased here.

As with its previous documentary, The Euthanasia Deception, EPC is urging people to organize local screenings of Fatal Flaws.