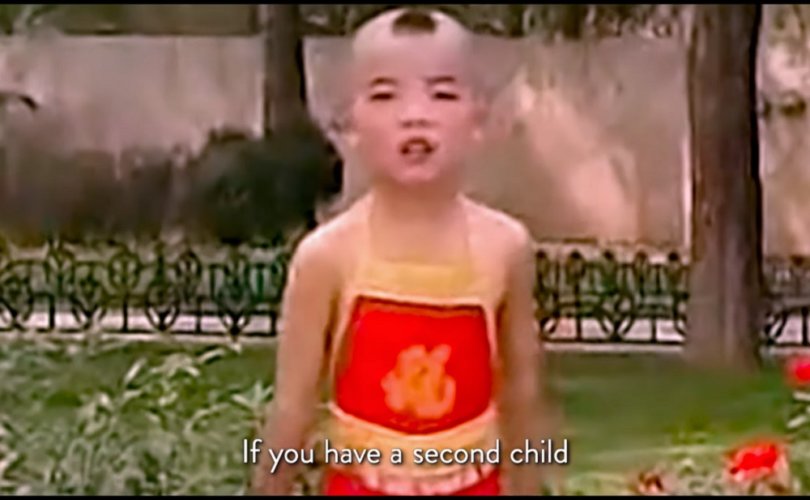 August 21, 2019 (Live Action News) — The terrors of China's longtime One-Child policy are, by now, no secret. Most of the world is well aware that families there can be subjected to any number of penalties — from something as minor as a fine, to something as major as a forced abortion. But a new documentary lays bare all the horrific details. “One Child Nation,” produced by Amazon Studios, saw limited release in August, airing in theaters in select cities across the country.

Directors Nanfu Wang and Jialing Zhang explored the effects of how population control, put into place allowing families to have one child only between 1980 and 2015, destroyed many of China's citizens, especially women. In addition to directing the film, Wang also served as a narrator, sharing her personal story alongside a wider scope of China's population. Once Wang became a mother herself, the horrors of China's policies struck her much harder. “Becoming a mother felt like giving birth to my memories,” she told the New York Times.

Like many Chinese families, Wang's parents hoped for a boy. “When I was born a girl they named me Nanfu anyway, hoping that I would grow up strong like a man,” she said in the film while looking at family photographs.

Families were sometimes allowed to have a second child if their first was a girl, due to the low value Chinese society places on women. Second girls were often abandoned or killed. Meanwhile, the filmmakers interviewed villagers and Chinese citizens, who explained the devastating ways authorities enforced the One-Child policy. A national task force spied on citizens, seizing their property and destroying their homes if they didn't cooperate. As has been extensively covered by Live Action News, women who got pregnant with more than the allowed number of children were likely to be dragged off the streets and forced into abortions.

“In those days, women were abducted by government officials, tied up and dragged to us like pigs,” one midwife said. Meanwhile, as Chinese orphanages began opening to deal with abandoned babies, human trafficking began to flourish. Families who violated the One-Child policy would find their newborns kidnapped by state officials and sold to orphanages.

And for many of the residents who had survived these horrors, propaganda and brainwashing still makes it difficult for them to voice criticisms. “All the people who resisted and suffered, if you ask them today — my mom, my grandpa, and my aunt, my uncle — everyone would still say the policy was necessary and eventually positive,” Wang said.

In an interview with NPR, Wang explains how pervasive state propaganda was, complete with songs on TV and messages on lunchboxes. “At some point, it just became a normal part of life, just like the air, the water, the tree,” she said. “And you just stop paying attention, stop questioning, because it has always been there.” Anyone who had siblings, she added, was made to feel ashamed.

Though the One-Child policy has allegedly been relaxed, not much has changed. And the terrible repercussions still exist; Chinese women have the highest suicide rate in the world. Human trafficking continues, thanks to the gender imbalance caused by the decades-long policy. Men struggle to find wives, leading to a market for women and girls to be trafficked and raped, forced to have children. Epidemics of loneliness and depression are also widespread, among both women and men. And many have no idea the extent of the suffering that takes place in China. “One Child Nation” is an important tool to bring an even greater awareness to the human rights abuses that have taken place there — and continue to take place there today.

To find showtimes for “One Child Nation,” visit the film's website.