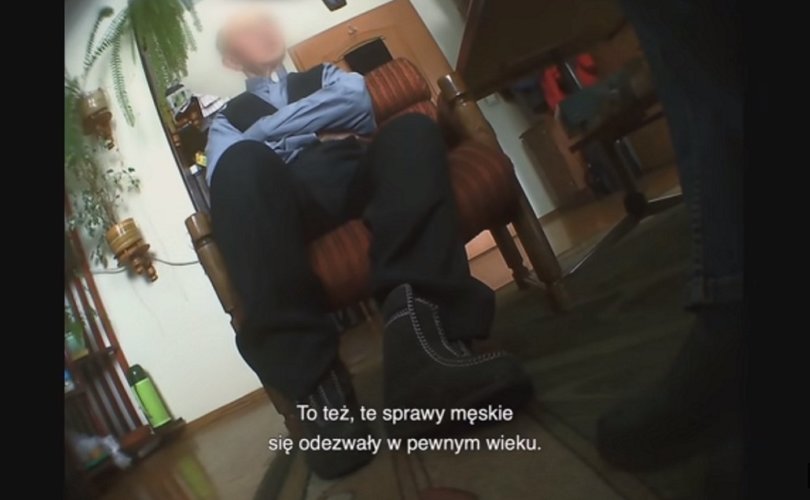 A scene from the Polish documentary 'Tell No One.'SEKIELSKI via YouTube

KRAKOW, Poland, May 22, 2019 (LifeSiteNews) ― Three priests mentioned in a recently released documentary about clerical sexual abuse of minors in Poland were collaborators with the country’s dreaded communist-era “Security Service.”

Tylko nie mów nikomu (“Tell No One”), which was released to YouTube this May 11, has now been seen over 20 million times. Director Tomasz Sekielski revealed after his film’s release that three of the priests it featured were “registered as secret collaborators” of the Służba Bezpieczeństwa (S.B.).

The three priests were Fr. Jan Anioł, filmed confessing to molesting seven-year-old girls; Fr. Franciszek Cybula, a Solidarity chaplain who was filmed admitting to having had a sexual relationship with a teenage boy; and Fr. Eugeniusz Makulski, the curator of the Basilica of Our Lady of Licheń, accused of child sexual abuse in the 1970s by an anonymous victim who says he is now himself a priest. Both Cybula and Makulski had been honored in Poland as hero priests of the communist era.

Formed from an earlier security service in 1954, the S.B. was responsible for monitoring and arresting perceived enemies to Poland’s communist dictatorship. Active against the Solidarity movement of the 1980s, the S.B. was responsible for the beating and death of the most renowned of the Solidarity chaplains, Fr. Jerzy Popiełusko. Many Poles, willingly or unwillingly, were collaborators with the S.B., including, it is alleged, Solidarity spokesman and later Polish president Lech Wałęsa.

Krystian Kratiuk, editor-in-chief of Polonia Christiana’s PCh24.pl website, told LifeSiteNews via email that the S.B. was determined to destroy the Catholic Church in Poland through discovering the misdemeanors of priests.

“Every cleric had a file in the SB, and they tried to catch every priest with wiretaps, agents, or hidden cameras in any offense in order to discredit him,” Kratiuk explained.

“This is how the whole system worked ― to this day we suffer the consequences.”

Kratiuk said that pedophile priests “snuck” into the priesthood in the same way they did in the USA and Ireland, but they also did so through the activity of the secret police.

“[The] SB had knowledge of many priests and used it for its own purposes,” he wrote. “[The] SB, of course, also organized pedophile and homosexual provocations to find materials that discredited priests.”

The PCh24.pl editor also stated that the S.B. worked for the promotion of priests and others who collaborated with the communist government because it gave them access to “secrets at a higher level of the church hierarchy.”

Kratiuk believes that Fr. Cybula might have become a highly placed Solidarity priest and, subsequently, the personal chaplain of President Lech Wałęsa, thanks to the machinations of the S.B.

An editorial in Polonia Christiana further details the role the Polish “security services” played in exploiting the vices of Polish citizens.

“Those who are better versed in history know very well that in 1985 the security police carried out an organized campaign aimed at a broad surveillance of people from the angle of their sexual life, to collect ‘hooks’ that allowed [the S.B.] to convince them to cooperate,” it said.

Referring to a leading Polish communist with enormous influence before, during, and even after the events of 1989, Polonia Christiana continued, “The movement of Czesław Kiszczak makes us aware of what is always known: special services are based above all on people’s weaknesses and their falls from grace.”

The Sekielski brothers’ documentary is savage in its criticism of the Polish Catholic bishops, whom some victims and experts featured in the film accuse of having both moved abusive priests from parish to parish or diocese to diocese and covered up their crimes. Ultimately, abuse victims Market Mielewczyk and Artur Nowak wonder how much St. John Paul II and, especially, the late pontiff’s still living secretary, Cardinal Dziwisz, knew about clerical abuse and ring the cardinal’s doorbell to find out. He’s not home.

The film also shows harrowing footage from secretly recorded confrontations by victims of their alleged abusers, as well as recordings of victims lying under oath that they will keep their depositions confidential and about the cameraman accompanying them. One priest is shown, some time subsequent to a meeting with his victim, being taken out of his house by paramedics, apparently dead.

Polonia Christiana editor Kratiuk believes that the Church in Poland indeed erred by not expelling clerical collaborators decades ago.

“The Church in Poland did not purge herself of the collaborators of the SB despite the fact that 30 years ago communism allegedly collapsed,” he told LSN.

“If the Church had been cleansed earlier, today it would not have had such a big problem with .. paedophilia.”

However, Kratiuk also believes that, just like the communists of the last century, modern left-wing activists like the Sekielski brothers want to use the crimes of abusive clergy to harm the Church in Poland.

“Today left-wing journalists with the same views as communist activists use SB agents and (perhaps) their own provocations to supposedly ‘repair’ the Polish Church,” he said.

Maciej Kwiatkowski, a Catholic in the central Polish town of Otwock, told LifeSiteNews that he too believes that the Church in Poland needs “purification”.

“In my opinion, one of the chief problems of Poland after 1989 was that the Church did not undergo purification,” he said in Polish via social media. “Because of this it lost the ability and the moral right to influence the [healing, post-communist] processes that took place in Poland in the economy and other domains. That also became the main cause of the current pedophila scandal.”

However, Kwiatkowski also pointed out that the warning “tell no one” now seems to apply to all pedophiles in society outside the Catholic Church. He explained that a documentary called Pedofile, shot in the early 2000s, was released only recently because its publication had been discouraged by the prosecutor’s office.

“You can guess why,” he wrote. “Because very well connected perverts from all important fields are involved in this practice: artistic, economic, judicial, political, journalistic, etc. The common wisdom is that bringing to light and stigmatizing pedophilia concerns only one domain: the clergy ― and only those belonging to a single religious denomination. As for the rest, let’s tell no one.”

Most of the priests accused of child sex abuse by the documentary are very elderly men, and almost all of the victims discussed by the film were allegedly molested before the collapse of Poland’s communist regime. Although only two of the victims interviewed were female, one now a middle-aged woman and the other now a teenager, their stories were featured first in the film.

The documentary features interviews with a psychologist, who suggests (at 1:17:44) that the majority of  clerics who molest children do so not because they are true pedophiles, who never feel satisfaction in sexual relationships with adults, but merely because the children are available and convenient and the clerics lack “interpersonal resources.” At no point does anyone in the documentary describe long-term sexual activity with post-pubescent boys as homosexual in nature.

The stories of the victims are heartbreaking, and the sexually explicit recollections of abuse are told against a backdrop of images and objects holy to Catholics, including a figurine of the Pietà and a golden communion chalice. Such a use of the imagery adds weight to concerns that the filmmakers are ultimately seeking to do what the historical partitions of Poland, the German and Soviet occupations, and the communist regime could never succeed in doing: divide and conquer the Catholic faith in Poland.