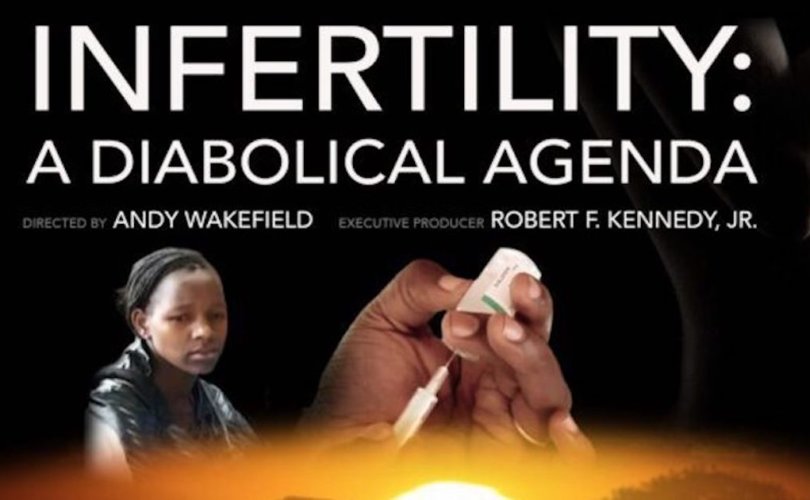 (LifeSiteNews) – A new documentary film alleging a “population control experiment” in which the World Health Organization (WHO) created and distributed a vaccine capable of sterilizing women in Africa demonstrates the political machinations which made the nefarious scheme possible.

The new film “Infertility: A Diabolical Agenda,” produced by Children’s Health Defense (CHD) in collaboration with British filmmaker and activist Dr. Andy Wakefield, purports to “reveal the truth behind WHO’s nefarious collaboration with the Kenyan government in which an experimental tetanus vaccination, later found to be laced with the pregnancy hormone βhCG, was given to millions of unknowing African women of childbearing age.”

The film explains that for 20 years, from 1972 until 1992, the WHO funded research for the development of a specially enhanced tetanus vaccination capable of rendering women infertile in response to a perceived overpopulation crisis.

The research paper “Development of immunological methods of fertility regulation,” published in 1987, shows that the WHO had “been supporting research on a synthetic vaccine against the HCG molecule” – an important part of the signaling process for the release of progesterone, which maintains a pregnancy.

Scientists found that combining the “tetanus toxoid used in the routine tetanus vaccine” with βhCG created a chemical able “to immunize a woman against getting pregnant or abort a successful pregnancy,” the film’s narrator said.

The vaccine produced its intended effect, generating antibodies both against tetanus and HCG, but while the vaccination campaign had the full support of Kenyan leaders as well as “elite groups,” the rollout was not initially successful owing to push back from women’s groups which had noticed infertility observations during the vaccine’s trial.

By 1995, however, a neonatal tetanus eradication campaign was planned in Kenya, backed by the WHO, and which targeted women from 15 to 49 years-of-age, in other words, women of childbearing age.

“We were already giving tetanus injections to all the pregnant women who were attending antenatal clinic to prevent neonatal tetanus,” obstetrician Dr. Stephen Karanja said. “That was already part of the program in the country.”

“But here, the World Health Organization comes and says, ‘No, no, no … we also want to give them outside pregnancy,’” Karanja added.

Aware of similar tetanus vaccine campaigns and concerned about the risks to fertility, the pregnancy doctor petitioned the Catholic Church, which runs healthcare facilities within Kenya, to test the jabs for HCG.

However, before testing could commence, the WHO inexplicably withdrew the program, only gaining the government’s backing for the vaccine campaign some 18 years later, in 2013.

At this point, the Catholic Church decided to test the vaccines for HCG, the filmmakers explained, obtaining samples of the shots from the field in March 2014 and subsequently discovering HCG-bonded tetanus within the vials, corroborated by three independent laboratories in the nation’s capital, Nairobi. In a later sampling from October in which six vials were tested at six independent labs, HCG was found in half of the WHO vaccines.

The findings prompted Church leaders to call for an end to the vaccine program while priests urged their congregations to avoid taking the shot, given the risk of sterilization.

LifeSiteNews reported at the time that Dr. Muhame Ngare, then-spokesman for the Kenya Catholic Doctors Association, had warned that “this WHO campaign is not about eradicating neonatal tetanus but a well-coordinated forceful population control mass sterilization exercise using a proven fertility regulating vaccine. This evidence was presented to the Ministry of Health before the third round of immunization but was ignored.”

“The only time tetanus vaccine has been given in five doses is when it is used as a carrier in fertility regulating vaccines laced with the pregnancy hormone, Human Chorionic Gonadotropin (HCG) developed by WHO in 1992,” Ngare explained, vindicating the Church’s cautious approach.

The vaccine was also being pushed exclusively to women of child-bearing age, causing doctors to question the motivations behind the much-publicized campaign.

“Usually, we give a series three shots over two to three years, we give it anyone who comes into the clinic with an open wound: men, women, or children.” Ngare said at the time. “If this is intended to inoculate children in the womb, why give it to girls starting at 15 years? You cannot get married till you are 18. The usual way to vaccinate children is to wait till they are six weeks old.”

The CHD film noted that the government and Catholic Church agreed upon a testing protocol in 2014, entrusting the AgriQ Quest lab with the work of analyzing both the nine originally tested vaccine samples as well as a selection of new vials from government storage.

Frederick Muthuri, the lab director at AgriQ Quest, confirmed that the original positive samples again tested positive, but that 52 samples taken from government storage did not contain HCG, though they were labelled as being from the same batch.

Dr. Nicholas Muraguri, then the government’s director of medical services, asked the lab to “alter the results to reflect that the vaccines were safe to be administered.” After the lab refused to bow to government pressure, the WHO launched a counter-campaign against the Church, accusing bishops of spreading misinformation while flatly denying any fertility dangers with the jab, declaring them “absolutely safe” and “free of beta HCG.”

Indeed, the government went on to suggest that the Church had meddled in the testing procedure, given that samples provided by the Church were contaminated, while the government-stored samples were all free of βhCG.

The Kenyan Ministry of Health later released a statement rejecting the bishops’ “allegations indicating that the tetanus vaccine was laced with contraceptives.”

“These are baseless pronouncements not backed by any scientific evidence,” the government speciously claimed.

Countering the government’s defense of the vaccines, AgriQ Quest confirmed that the HCG found within the nine positive field samples – that is to say, samples taken from vaccines actually used in the program – was of the same “chemically bonded form” which the WHO had developed and which “could only have been introduced in the manufacturing process,” quelling claims that the Church could have contaminated the samples at a later point.

“It’s really sad when you see the pharmaceutical industry, and people interested in profit, and maybe other things like population control, actually injuring people on purpose to achieve their ends,” Ngare lamented towards the end of the exposé.

Obstetrician Dr. Karanja issued a final warning regarding the supposed healthcare programs of the WHO, saying: “When they’re through with Africa, they’re coming for you. Keep your children ready. They will come for them, and they’ll come for you.”