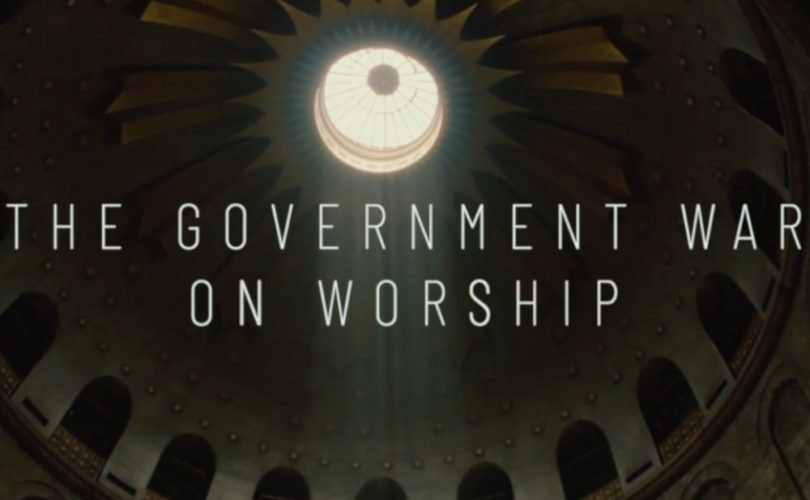 “The Government War on Worship”JCCF screenshot

June 21, 2021 (LifeSiteNews) – A member of a church in Canada said “until they lock us up,” the congregation will continue to worship. The church had gone underground after it was barricaded and shut by health officials.

“I was totally surprised that in Canada, which I thought was a free nation, that they would send a pastor to maximum security prison for 35 days because he would not cave on his beliefs,” said Allen Neil of Grace Life Church in Alberta in a powerful new documentary titled “The Government War on Worship.”

“I cannot believe that I’m sitting here today talking to you and telling you that they came in, they cut the locks in early morning, cut the locks off the church, chained the doors, and then put fences up,” said Neil. “I’ve supported going underground. We enjoy fellowship every Sunday, and until they lock us up and put us in jail, we’ll continue to exercise what I believe is my constitutional rights and freedoms.”

The video, created by the Justice Centre for Constitutional Freedoms (JCCF), highlights its clients Grace Life Church and Pastor James Coates. Before the church was forced underground, Coates was the first pastor in Canada to be arrested for breaking COVID rules which limited church size and mandated masks and physical distancing.

He spent over a month in jail after he refused to accept bail conditions which blocked his release unless he agreed to not hold church services.

The video illustrates how in recent months “governments across Canada have waged war on churches, preventing the exercise of Charter-guaranteed rights and freedoms to worship, associate, and assemble.”

In addition to Coates, two other Christian pastors have been jailed for breaking COVID rules in Alberta under is Conservative Premier Jason Kenney, who is a Catholic: Pastor Artur Pawlowski and, most recently, Pastor Tim Stephens.

“Instead of us all scattering and the church not meeting, the exact opposite happened”

Grace Life member Achnes Smith said in the JCCF video that the church did “everything possible to make people feel safe,” after the decision was made to open up following the first lockdowns in the spring of 2020.

Smith said that Grace Life allowed attendants to “make our own decisions,” but after being eventually shut by health authorities, they decided “to obey God rather than Caesar because God commands us to gather as a congregation and our pastors take that very seriously.”

“So, when Pastor James was taken to prison, I think the government thought that we would scatter because they firmly believe that we were following a man. So instead of us all scattering and the church not meeting, the exact opposite happened because of the media attention that was brought to our church and to Pastor James. People started coming from far and wide. Some people drove five hours to come to our church service, and our attendance doubled.”

Smith noted that her father was forced to fight against his own “countrymen” by German officials in the Second World War but refused and went into “hiding.” Smith said her father was eventually caught after being snitched on, and had to do what was essentially one year of slave labor.

“If my father was here today and he knew what the government is doing in a free country to people that are supposedly free people, and they are locking up their pastor, and they’re taking their property, he would be absolutely astounded,” said Smith. “My father told me when I was a little older that he would not change a thing about what he had done by hiding from the authorities and not obeying the authorities during the Second World War. And he would be proud to stand with grace alive today, I believe.”

The video’s introduction highlights parallels between communist China’s persecution of Christians and what is happening today in Canada, with Christians being jailed or fined for practicing their faith because they have chosen to worship in violation of COVID health rules.

“It’s exactly like communist China where they will … physically barricade off a church. I guess it’s worse in China. They might just bulldoze the church and destroy it. But Pastor Coates and Grace Life Church have been quite public about the fact that they are continuing to meet and worship every Sunday, and they’re doing so in secret. And in rural Alberta, there are thousands and thousands of, you know, big barns and all kinds of private property … where church services can be held and are being held,” said JCCF President John Carpay in the video.

Carpay identified as good news that “for the first time ever in 13 months, governments are literally being forced by the Justice Centre, by our clients to actually put forward evidence in court rather than relying on compliant media and fearmongering news conferences that are held by politicians and chief medical officers.”