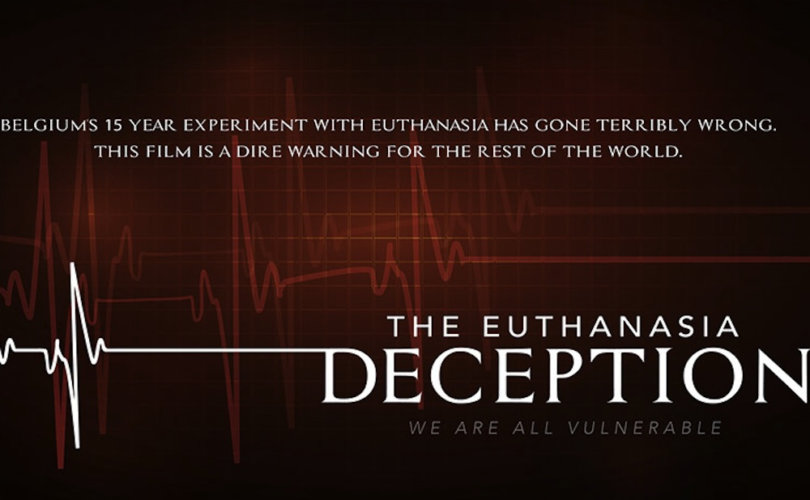 September 16, 2016 (LifeSiteNews) — A new documentary exposes prevalent deceptions about euthanasia by telling the stories of people who have firsthand experience with it: nurses, family members of the euthanized, bioethicists, and the disabled and their families.

Euthanasia Deception, produced by Euthanasia Prevention Coalition executive director Alex Schadenberg and Kevin Dunn, dismantles three lies that the euthanasia movement promotes: assisted death is compassionate, euthanasia is all about individual autonomy, and legal safeguards will protect the vulnerable. It primarily focuses on what 15 years of legalized euthanasia has brought to Belgian society and healthcare ethics debates throughout the world.

“The whole video comes together with the fact that we realized that people who promote euthanasia and assisted suicide are doing so under certain themes which are very deceptive at best,” Schadenberg told LifeSiteNews. “The only way to effectively counter that in this culture is by telling stories from people who have actually got experience with the issue at hand.”

Euthanasia and assisted suicide are “falsely promoted as compassion and mercy,” when really “it’s about ending the life of someone who’s going through a very vulnerable time,” he said.

‘A decision based on the grief of today,’ not the possibility of tomorrow

“My thinking became clouded” after several years with multiple sclerosis, Mark David Pickup, a Canadian, explained. “If there had been a Jack Kovorkian back in the mid-1980s, I can see that I might have opted for that option. I’m so glad today that it did not happen because I never would have known my grandchildren. You see, the difficulty with making that decision is we’re not really sure what tomorrow is going to bring. We make a decision based on the grief of today.”

“Quality of life is a moving target,” Pickup said. He gets his quality of life from loving and being loved rather than from athleticism and his career, as he did when he was younger.

Euthanasia Deception emphasizes the subjectivity of “quality of life” judgments about other people’s lives and the fact that most requests for euthanasia are because of fear of future suffering, not current physical pain.

“It becomes a form of discrimination” to deny the disabled suicide prevention, Schadenberg told LifeSiteNews.

Interdependence vs. radical autonomy and a ‘new race’

Euthanasia Deception interviewed Belgians about their experiences with euthanasia, which has been legal there for 15 years. One man, Professor Tom Mortier, was informed his physically healthy mother had been euthanized because she was depressed. Autonomy is a myth, Mortier explained, because we are all dependent on each other in some way. His mother’s life was not the only life effected — his was negatively influenced in a permanent way. Even if euthanasia causes someone’s pain to stop by killing him or her, that act causes pain to so many other people.

Lionel Roosemont, the father of a severely disabled 20-year-old, shared that when his family has been walking in public, complete strangers have approached him and asked why his daughter wasn’t euthanized.

“My [other] daughter who was 13 at the time … said, ‘they do not have the right to say that,’” Roosemont recounted. “She was very angry. But she was right.”

“It’s like a thick, black blanket that has descended on the country of Belgium and that blanket is called euthanasia,” he said. “We are in a society that wants to have a new race. And everything which does not fit into the perfect image of what that race would be today has to be eliminated.”

‘We were making her die because it suited us’

The Netherlands, like Belgium, has liberal euthanasia laws. Hendrik Reitsema, a Dutch man featured in Euthanasia Deception, explained that his 80-year-old grandfather would have likely lived for three years after he was diagnosed with non-Hodgkin’s lymph cancer had physicians not initiated an aggressive “treatment to kill” program that left the elderly man dead within about a week.

“I killed people,” Kristina Hodgetts, a Canadian nurse who worked at a large Ontario hospital and rural nursing home, said. The way healthcare workers tried to unjustly hasten a particular patient’s deaths led her to ask, “Are we helping someone die, or are we making someone die?”

“We were making her die because it suited us,” Hodgetts said. “I left my job as a nurse because I could not be part of that euthanizing culture that we have.”

“There is something wrong, fundamentally, with taking another human being’s life,” she said. “They have entrusted you with their life, and you take it.”

Because doctors in Belgium self-report on the euthanasia they commit, the process has “no effective oversight,” Schadenberg told LifeSiteNews.

The doctor who causes a patient’s death is the one who must send in the report, making it extremely unlikely that a doctor would report himself for abusing the law.

Another disturbing aspect of euthanasia in Belgium is that doctors list the causes of death of those they kill as whatever health problem the patient was experiencing — not lethal injection even though the injection is what kills the patient, Schadenberg said.

Although most of the stories told in the film are devastating and heartbreaking, Euthanasia Deception is not without some stories that will give viewers hope about the power of love and human solidarity. Everyone should watch Euthanasia Deception to learn about increasing and deadly threats to the vulnerable — and then join the movement to stop the barbarism that is doctors killing their patients.

Euthanasia Deception can be rented, downloaded, or ordered here.