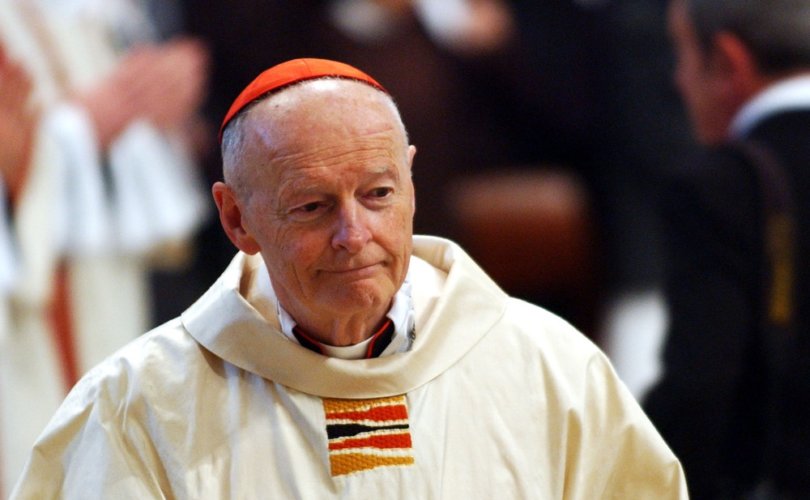 WASHINGTON, DC, August 30, 2018 (LifeSiteNews) – Archbishop Carlo Viganò’s claim that Pope Benedict gave sanctions to now ex-Cardinal McCarrick, one of which included that he was to “leave the seminary,” appears to be backed by new evidence that McCarrick did indeed abruptly leave the seminary in which he lived in 2008.

Speaking to Catholic News Agency (CNA), two sources said that they were present when the Apostolic Nuncio in Washington, Archbishop Pietro Sambi, informed McCarrick that he had to leave.

“Two sources present at a 2008 meeting between McCarrick and Sambi told CNA that the nuncio instructed McCarrick to leave the seminary at that time. According to those sources, Sambi told McCarrick his departure was the direct instruction of Pope Benedict XVI,” reported Ed Condon of CNA.

This tallies with the account of Archbishop Viganò, former Apostolic Nuncio to the USA, that in 2008 Benedict XVI had imposed sanctions on McCarrick, including eviction from the Washington diocesan seminary in which he lived.

“Pope Benedict had imposed on Cardinal McCarrick sanctions similar to those now imposed on him by Pope Francis: the cardinal was to leave the seminary where he was living, he was forbidden to celebrate [Mass] in public, to participate in public meetings, to give lectures, to travel, with the obligation of dedicating himself to a life of prayer and penance,” wrote Viganò in his August 22 detailed report.

Viganò claimed that Benedict had been made aware that the Archbishop Emeritus of Washington had engaged in sexual misconduct with seminarians and priests and wanted McCarrick to dedicate himself to a life of penance and prayer.

When the former Nuncio’s testimony was released last week, the current Archbishop of Washington, Cardinal Donald Wuerl, denied that he ever received “documentation or information from the Holy See specific to Cardinal McCarrick’s behavior or any of the prohibitions on his life and ministry suggested by Archbishop Vigano.”

Benedict had appointed Wuerl Archbishop of Washington on May 16, 2006.

CNA reporter Condon wrote that McCarrick did leave the seminary at the end of 2008 and moved to the parish of St. Thomas the Apostle in the “upscale” Woodley Park neighborhood of Washington, DC. One of the priests living there at the time told CNA that he had to move out of his rooms to make room for a “mystery VIP.”

“It was all very sudden. I was moved around but given another room in the rectory.”

He was told by his pastor that McCarrick was moving there. The unnamed priest also told CNA that he had been told the Cardinal was “no longer allowed” to live in the seminary.

CNA’s source also spoke of extensive renovations to the rectory before McCarrick moved in.

“There was significant construction to create his suite, which took over two prior suites and two full baths, as well as the single guest room next to me which was converted into a private chapel for McCarrick’s exclusive use,” the priest told CNA.

McCarrick apparently took up residence there in either late February or early March 2009.

But despite all this work and expense to one of its own rectories, the Archdiocese of Washington is denying that it had anything to do with McCarrick’s move. Condon reported that the archdiocesan spokesman, Ed McFadden, told CNA on Monday that “Archbishop McCarrick typically made his own housing arrangements and did not directly involve the Archdiocese of Washington.”

Since the Archdiocese of New York announced in June that a “credible and substantiated” allegation had been made that McCarrick had, as a priest in New York, sexually abused a teenage boy, McCarrick’s reputation for sexual misconduct with seminarians, once an open secret among members of the clergy, has become common knowledge.

In the wake of the McCarrick scandal, the Pennsylvania Grand Jury Report into clerical sexual abuse of minors has criticized Washington’s current archbishop, Bishop Emeritus of Pittsburgh, Donald Wuerl. Wuerl stands accused not only of having protected clerical sex abusers in his old diocese but of endangering seminarians in Washington by allowing Cardinal McCarrick to live among them.

Archbishop Carlo Mario Viganò dismissed Wuerl’s denials that he knew about McCarrick’s reputation very strongly in his statement, saying, “The Cardinal lies shamelessly and prevails upon his Chancellor, Monsignor Antonicelli, to lie as well.”