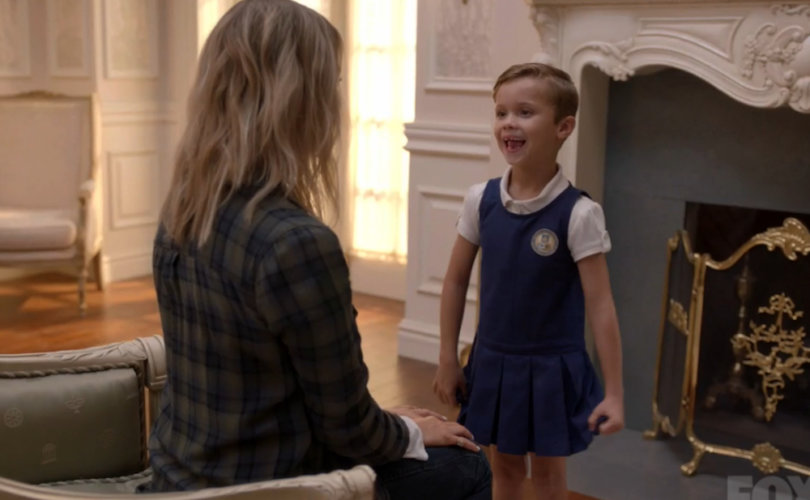 A scene from 'The Mick' with Ben wearing a dress

The Mick is about an irresponsible, poor, crass sister (Kaitlin Olson as Aunt Mickey) forced by circumstances to babysit the three children of her rich sister (the parents are dragged off in an FBI raid). Based on several Fox promotional YouTube snippets, the show is a smorgasbord of the crude one-liners, immature sexual humor, vulgarity, promiscuity, binge drinking, perversion, and left-wing social activism — much of it involving children.

That includes an awkward, free commercial for Planned Parenthood, the world’s largest abortion provider, uttered in one scene by the The Mick’s snotty teenager, Sabrina (Sofia Black-D’Elia).

Writes Lindsay Kornick with the Media Research Center’s NewsBusters: “There is nothing decent about The Mick. Not the topic, not the characters, and most definitely not the humor.”

A small sample of videos for The Mick contains an incredible array of inappropriate sexual banter, nastiness, deceit, over-the-top snark, and smut, including:

Sabrina: Maybe you don't know this, but Planned Parenthood provides healthcare to over three million women in this country.

Mick: Oh, sweetie, I know all about Planned Parenthood. I should have one of those punch cards that gets you a free sub every 10 visits.

Liberal critics are heaping praise upon The Mick and comparing it with the similarly edgy It’s Always Sunny in Philadelphia, which also stars Olson.

Take Action: Contact the Fox network (888-369-4762) and tell them that featuring young children in crude sexual situations and exposing them to vulgarity and promiscuity — while promoting abortion-on-demand provider Planned Parenthood — is not funny. Urge Fox to pull The Mick.