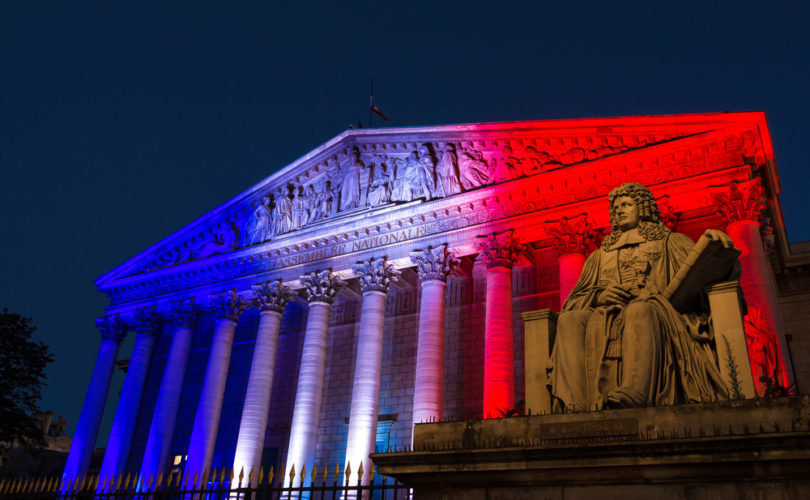 July 1, 2021 (LifeSiteNews) — France’s newly adopted bioethics law will give lesbian couples and single women access to medically-assisted procreation (called “PMA” in France), in procedures that will be paid for by the French publicly-funded Social Security. The new law involves a profound disruption of the traditional understanding of filiation: Under its dispositions, the female partner of a woman who gives birth will be able to “recognize” the child before it is born and will appear as its “second” parent on its birth certificate, to the exclusion of the father whose very existence will now be denied under the law.

Only one hurdle is left before the transgressive law enters into force, namely its assessment by the Constitutional Court, which is not expected to change it in any meaningful way. The government has already said it hopes to promulgate the law very soon, and Emmanuel Macron called it a “major accomplishment” on the path to “more equality.”

Until now, “PMA” was restricted to stable couples with fertility issues. This criterion has been removed from the law, meaning that “heterosexual” couples will be able to ask for artificial procreation even if they can conceive naturally, for any reason.

The law was adopted by the French National Assembly on its third hearing on Tuesday, after the Senate refused to discuss the text further on June 24, but rejected it wholesale after the lower chamber had repeatedly dismantled all the amendments, generally conservative, made to the text by the senators.

Under the French legislative system, when National Assembly and Senate fail to reach a consensus over a text after a series of back and forth readings, it is the Assembly that has the upper hand. In this case, the “députés” of the lower chamber knew they had the full support of the government, which explains at least part of their disregard for all the changes and amendments upheld by the senators, leading them to sweep away all objections.

Even the public consultation set up by the executive before the law was proposed in parliament had widely rejected the idea of allowing same-sex couples and celibate women to “fabricate” babies through artificial procreation in the absence of a father, but these objections were also swept aside both by the government that drafted the law and by the National Assembly, which adopted the definitive version by 326 votes in favor, and 115 against.

The so-called “egalitarian” step forward allowing women to decide to have a baby without a father was one of the major promises of Emmanuel Macron during his presidential campaign in 2017.

Macron himself is childless, having married a woman 24 years his senior, Brigitte Trogneux, with whom he fell in love when he was a 15-year-old high school student and she was his French teacher — and a mother of three, one of her daughters being the young Emmanuel’s classmate.

France’s new bioethics law includes many other transgressions. The first bioethics law came into force in 1992, and it outlawed or at least hindered a number of immoral practices, such as embryo research. However, it contained a “revision clause” that would oblige a regular modification of the text in view of new situations and technical “advances.” Over the years, several such revisions have taken place, each time providing for easier access to research on human embryos and including more and more elements of the culture of death. But the latest law, which included a seven-year revision clause, has gone way beyond its predecessor.

One of the only things the law is holding off is surrogate motherhood, although it already provides some latitude for the transcription of children born abroad to French couples through the “hiring” of a foreign “gestational carrier” into the French civil registry.

The whole process of bringing the text to its definitive approval by the National Assembly took two years, and showed that Emmanuel Macron and his government were bent on having it adopted at all costs, making it a priority even in the midst of COVID restrictions and the severe damage done by lockdowns to the French economy, with severe limits set on personal freedoms in the name of the coronavirus.

When the law goes into effect, likely within a few days, France will enter into a legal dystopia where adults can make or break babies with an increasing number of techniques at their disposal.

In the interests of children who want to access their origins, the anonymity of sperm and egg donors has been scrapped, allowing for the communication of details regarding their age, physical characteristics, family status or profession, and even their identity when the child reaches 18 years of age. However, the new measure will have no consequence at all regarding legal filiation.

All adults, both men and women, will be allowed to freeze their oocytes and sperm cells without medical justification, in view of later artificial procreation.

Research on embryonic stem cells will no longer require prior approval by the National Agency for Biomedicine, but a simple declarative process, while embryos may be cultured up to 14 days in vitro (instead of 7 under present provisions). These embryos may not be implanted, but the Fondation Jérôme Lejeune warns that this is a step toward the “artificial uterus.” Parents may also give up their frozen embryos for research and the procedure to control the validity of their consent is scrapped under the new law.

Transhumanism is also present in the text, as its article 17 provides for the creation of genetically modified embryos using CRISPR-Cas9 techniques, as well as test-tube procreation with three parents. Both dispositions had been rejected by the Senate — to no avail.

Another innovation will authorize the creation of animal-human chimeras, using only animal embryos to which human genetic material will be added. These embryos may be implanted in female animals. This clearly means crossing the barrier between species and is one of the major transgressions of this law.

The production of human reproductive cells or “model” embryos obtained from embryonic stem cells is also provided for, with foreseeable artificial production of gametes for the procreative industry.

While the law will not allow for vastly extended eugenic pre-implantation screening of test-tube embryos, which the law commission of the National Assembly hoped to legalize, embryos will be able to be selected according to characteristics that would ensure the birth of a compatible donor for an older sibling with severe health problems.

The creation of a new condition — psycho-social distress — for “medical” abortion up to birth was rejected, but the one-week waiting period for women about to undergo a late abortion because of their baby’s or their own health issues will no longer be required. Selective abortions in cases of multiple children in one pregnancy will also become legal.

The specific conscience clause protecting doctors from having to participate in late-term “medical” abortions will no longer exist.

The Church of France called the new law “a failure that wounds our democracy.” Bishop Eric de Moulins-Beaufort, president of the French Bishops’ Conference, said in a statement: “The ‘large consensus’ willed by the President of the Republic does not exist, we see the triumph of an ideological drive despite the many warnings expressed by our fellow citizens — sometimes based on basic common sense.”

Faced with this law, the bishops of France continue to express great concern and to make an appeal.

Now that the law of our country authorizes new transgressions, it is more important than ever that each person should find the resources for vigilance and personal discernment necessary to make choices in full awareness of their ethical consequences.

The satisfaction of a need (even a legitimate one), the principle of equality, the needs of scientific research, the fear of disability cannot justify treating human beings as manipulable and disposable material.

If the law says what is legal, it does not say what is good. This new legislative framework breaks down more ethical barriers and makes each of us, more than ever, accountable to our personal responsibility.

The next presidential election will take place in less than a year in France. To date, the advancement of the culture of death has never been blocked or inverted under new political power-holders, but already groups such as the Manif pour tous have made clear that the fight against this bioethics law is not over and will be part of the debate leading to the election.