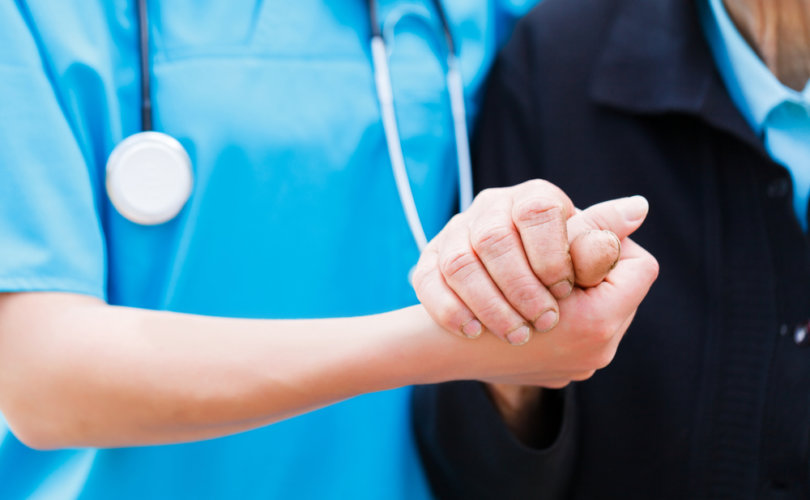 TORONTO, April 5, 2016 (LifeSiteNews) — The College of Nurses of Ontario has confirmed that nurses have the right to conscientiously object to taking part in “physician-assisted death,” after the Catholic Civil Rights League raised the alarm that the College’s interim guidelines could be interpreted as saying the opposite.

Chief among those concerns is the CNO’s “seriously flawed” 2009 “ethics practice standards” document, which states that if there is a conflict between nurse’s “personal values” and “a client’s wish,” and ultimately “no other solution can be found, the nurse may have to leave a particular place of employment to adhere to her/his personal values.”

“In light of the fact that assisted suicide and euthanasia are already here, through court orders, and will be here no later than June 6, it’s very important that [nurses] get clarification,” Elia told LifeSiteNews.

That includes the College clearly reassuring them “that they are able to conscientiously object to any acts of euthanasia and assisted suicide.”

The Supreme Court’s Carter decision striking down the existing law against assisted suicide and euthanasia takes effect June 6, and meanwhile, patients who want to be killed by medical means can petition their province’s Superior Court for permission.

The CCRL recently questioned the College of Nurses’ March 17 interim guidelines on “physician-assisted death” in an open letter of protest.

In the event that the Court approves an assisted suicide or euthanasia, the guidelines direct a nurse with conscientious objections to find another caregiver, and add: “If no other caregiver can be arranged, you must provide the immediate care required.”

“If the final statement and the directive ‘you must provide the immediate care required’ is intended to mean ‘medical aid in dying’, then your College has asserted the most jarringly outrageous example of forcing a health care professional to violate his or her conscience that has been proposed by any regulatory body in Canada,” the CCRL pointed out.

But CNO’s manager of communications Deborah Jones told LifeSiteNews in an email that “this does not mean that a nurse is obligated to participate in the physician-assisted death process.”

“With regard to physician-assisted death, as with any other situation that may cause moral conflict, nurses do have a right to conscientious objection,” she stated.

“A nurse must meet his or her obligation to provide a client’s immediate, routine and expected nursing care needs that fall outside of the process related to physician-assisted death,” Jones noted.

That care includes “administering routine medications or providing comfort measures until a replacement caregiver can be found.”

At the same time, Jones pointed out that “the College’s statement on moral/conscientious objection of procedures is outlined in the Ethics practice standard.”

This document “provides a process for discontinuing care while ensure the continuity of care for the patient” in cases where nurses “have a moral/conscious objection.”

Elia says that while the CCRL is “relieved that, apparently, personal care does not include noted ‘physician-assisted death’ as they call it,” at the same time, Jones’ pointing to the CNO’s ethics practice standards is  “extremely disconcerting to us” because that document is “seriously flawed.”

Elia says they are “extremely concerned” by the statement on page 6 that “the nurse may have to leave a particular place of employment to adhere to her/his personal values.”

And the College’s communications manager reassuring LifeSiteNews in an email is not the same as the College making clear “to all nurses in Ontario” that “they are able to conscientiously object to any acts of euthanasia and assisted suicide,” Elia said.

“It’s also puzzling that they are not consulting their own membership, which is the nurses of Ontario, on this,” he added.

Jones told LifeSiteNews that the College had not asked its members about assisted suicide and euthanasia, noting that the “physician assisted death issue was not initiated by the College of Nurses of Ontario.”

She also noted the interim guidelines were not directives, but Elia pointed out that anything that states “a nurse must” and is “coming from a regulatory body that has the power to suspend” can only be considered as a “directive.”

“Although regulatory bodies often exist in order to keep the interests of the public in mind,” Elia said, “the representative of nurses must not trample upon the freedom of conscience and religion the established Charter rights of their members.”

Polls show that the majority of Ontario nurses “vigorously disagree” with assisted suicide and euthanasia, the CCRL’s letter to the CNO pointed out.

Moreover, nurses are particularly vulnerable, Elia told LifeSiteNews. “In the end, the doctors can pick and choose the way they want to practise,” and have more leeway to “stay clear of it,” but nurses won’t have this option.”

Jean Echlin, president of the Euthanasia Prevention Coalition, and a longtime palliative care nurse and adjunct professor of nursing at the University of Windsor, agrees.

Nurses, who are on the front lines, usually work under the direction of another health care practitioner, and as a result are often put in difficult situations. “The RNs have always been left out there, holding the bag,” she told LifeSiteNews.

“And believe me, the doctors who don’t want to do this will gladly say to a nurse, ‘Here it is, carry on’,” Echlin said. “There’s no question in my mind.”

Moreover, nurses could not only lose their jobs for refusing to participate in assisted suicide or euthanasia, but “you count on the institution to give you a good letter of recommendation, where you’ve worked and worked hard, and will they do that, or will they sabotage you again?”

“I’ve got a lot of concerns of this,” Echlin said. “It’s open wide to abuse, not only of the patients and families but also abuse of the staffing, nursing and medicine particularly. … It’s horrendous to think of.”