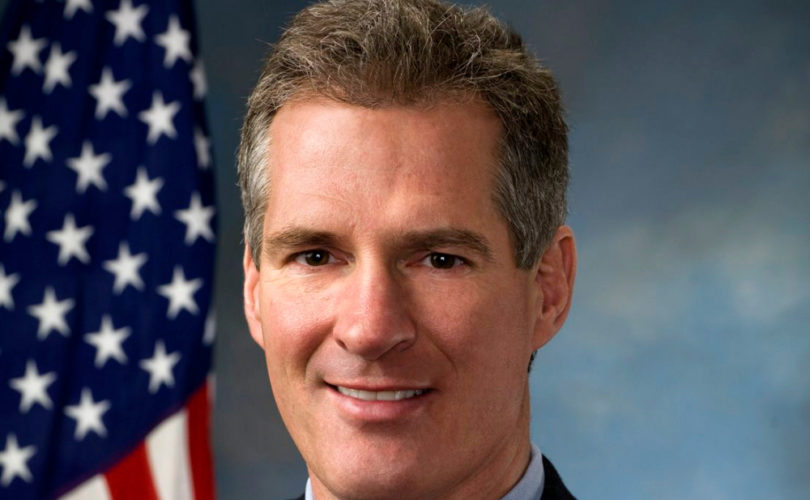 Former Sen. Scott Brown, running for the U.S. Senate in New Hampshire for the Republicans.

The New Hampshire Republican Party is standing up for all unborn life in 2014 while, at the same time, one of its highest-profile candidates is promoting his pro-abortion views.

On Saturday, the New Hampshire GOP reportedly voted to include in its 2014 platform a line stating that it promotes “the pre-born child’s fundamental right to life and personhood under the Fourteenth Amendment,” as well as the “Life at Conception Act.” While the platform is not yet official, nor public, both Politico and New Hampshire Public Radio are reporting the strong language's inclusion.

On Monday, Brown told a crowd at the University School of Law that he is “a pro-choice, independent Republican.” Therefore, said Brown, “I don't agree with that particular part of the platform, however I have always felt that we are a big tent party, we have the opportunity to agree or disagree.”

According to Peter Laufenberg, who serves as vice chairman of the Grafton County Republicans, “It does not surprise me that Brown, who supports abortion, is not backing personhood. With Democrats rolling out a campaign ad in the gubernatorial race talking about abortion and Planned Parenthood funding to drive attention away from the economic failures of their party, I suspect that Brown is being strategic in his decision.”

“I don't think this will hurt or help Brown,” continued Laufenberg. “If you are voting for him, you already know his position on abortion.”

Brown, who has been consistently polling at half-a-dozen points behind incumbent Sen. Jeanne Shaheen, won his party's primary over pro-life former Sen. Bob Smith earlier this month. At the time, Brown argued that his electability was greater than Smith's, who returned from retirement in Florida to seek his party's nomination.

Shaheen also decried the platform change, saying that the GOP is “dangerously wrong,” and is “showing just how irresponsibly out of touch they are with the needs and rights of women.”