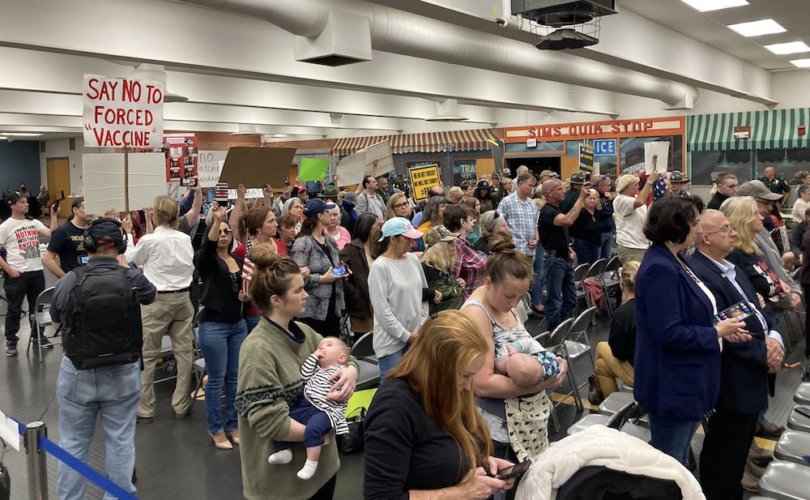 CBS affiliate WCAX reported that the state’s five-member Executive Council, which must approve all federal funds above $10,000, voted down the measure Wednesday, making New Hampshire the first state to reject federal COVID dollars.

“Today’s vote by members of my own party, quite frankly, was a disservice to the constituents that we are all elected to serve,” fumed Sununu. “The AG, Department of Health and Human Services, they addressed all of the councilors concerns and they still voted to send $27 million of our tax dollars, frankly, back to Washington, D.C., instead of spending it here to help our state to get out of this pandemic.”

The WCAX neglected to report on the council’s reasons for rejecting the money but linked to a brief Associated Press report on state Attorney General John Formella disputing council members’ fears that the money would bind the state to future “broad and sweeping federal mandates” from the Biden administration.

The Conway Daily Sun went into more depth on the controversy, revealing that Republican council member David Wheeler “said accepting the money would allow the federal government to access personal data;” when Wheeler pressed Sununu on this concern, the governor “said he could look to discuss in the future” an opt-in system for vaccination data rather than having to opt out.

Ted Gatsas, another Republican, noted that the council had previously approved $13 million for a mobile COVID-19 vaccination van and argued that additional money was simply unnecessary at this time.

The hearing before the vote drew significant attention from the public, with many attending to voice their opposition to vaccine mandates. Police arrested several people for “minor verbal outbursts”:

Right now: @NH_StatePolice are arresting a small number of anti-vaccine mandate protesters at the Executive Council meeting after repeated requests for quiet & a warning they could be charged w/ disorderly conduct. #NHPolitics #WMUR pic.twitter.com/4jyP4RWRj3

Across the nation, significant concerns remain about the COVID vaccines’ safety and effectiveness, especially for young people, which stem from the fact that they were developed and released far faster than any previous vaccine.

Further, a growing body of data indicates that the mass vaccination strategy for defeating COVID-19 has failed. The federal government considers more than 65% of eligible Americans “fully vaccinated” (a designation that has lost meaning in light of growing evidence that vaccine effectiveness wears off in a matter of months), yet ABC News reported last week that more Americans died of COVID-19 this year (353,000) than in all of 2020 (352,000), according to data from Johns Hopkins University.