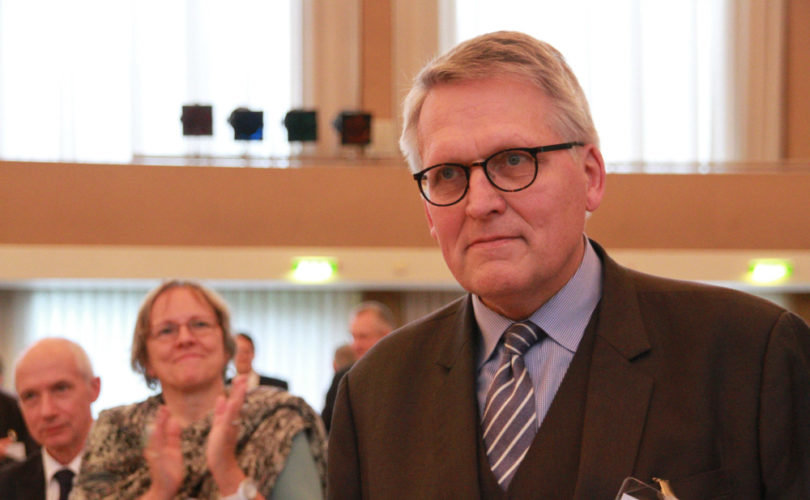 Dr. Thomas Sternberg, the new president of the Central Committee of German Catholics

December 1, 2015 (LifeSiteNews) – The new president of Germany’s bishops-sponsored lay organization has already made news by publicly defending same-sex unions and an organization that facilitates abortions.

Then on November 24, as the German branch of Vatican Radio reports, Sternberg signed a petition together with other German Catholic politicians who call for the State's legal protection of same-sex civil unions. The reason given for this petition was the desire for a “legal peace and for the recognition of a different form of living,” as Radio Vatikan quotes them. The German Catholic newspaper Die Tagespost also quotes this same petition in their own article the same day, saying:

The signatories stress, at the same time, that 'same-sex partners who take up reliable and enduring responsibilities for one another, who stand for one another, and who promise to be faithful, should also have the claim for a special protection by the State. They deserve, too, full and unrestrained acceptance.

Earlier, on November 22, the radio station of the Archdiocese of Cologne published an interview with Sternberg in which he proposed to do away with some of the standing controversial topics that are still agitating the Catholic Church. In giving one example, he says that,

in the near future, there will no longer be any struggle concerning those Catholic men and women who work in the field of care for pre-born human life, as it is being performed by the organization “Donum Vitae.” Such unnecessary issues of controversy have to be removed, and relatively fast.

Donum Vitae is indeed a controversial organization which, in the past, was even rebuked by the German bishops as being “outside the Catholic Church” and for partaking in a legal system in Germany that demands an explicit certification that a woman has personally partaken in an official counseling session before carrying out her intended abortion. This form of procedure allows a woman in Germany to have a legally permitted abortion. Since 1995, the German government has legally required women to obtain such a certificate from a legally constituted abortion counseling agency.

However, in 1999, the Vatican criticized the German bishops for lending a hand themselves, with the help of their pregnancy counseling organizations, to the practice of abortions. Pope John Paul II had issued a statement saying that the German bishops should not participate in this German legal system, and that they should abstain from supporting or allowing these ominous Counseling Certificates. It was then that Donum Vitae was founded in 1999 by German laymen – members of the above-mentioned Central Committee of German Catholics (ZdK) – with the purpose of handing out Counseling Certificates, and with the justification that some women might in the counseling session be dissuaded from going ahead with the intended abortion.

Only in 2006, the German bishops finally prohibited any Church cooperation with Donum Vitae. However, still today, on the official website of Donum Vitae, one can see that this organization offers the so-called “Beratungsschein” – Counseling Certificate – which is a necessary permit granted to those seeking a legal abortion, to include, in certain cases, receiving financial help by a health insurance agency. The exact words on the official website are:

Even if you are to decide for a termination of the pregnancy, you still can make use of the accompaniment by our counselors. Our counseling stations are authorized to sign the Counseling Certificate, according to the Penal Law §219, with which in Germany, a termination of a pregnancy is permitted without penalty.

As the German pro-life activist, Mathias von Gersdorff, points out in a November 23 article, the former and now-deceased bishop of Fulda, Germany, Archbishop Johannes Dyba, called these Counseling Certificates “Death Certificates” because they give a helping hand in killing a child in the womb. Von Gersdorff continues:

Archbishop Johannes Dyba was of the opinion that the real name of this organization [Donum Vitae—Gift of Life] should be “Donum Mortis,” [Gift of Death] since the only purpose of these Counseling Certificates which are given out there is to make possible an abortion without penalty.

Von Gersdorff, therefore, criticizes Sternberg for defending Donum Vitae. He concludes that “the ZdK has obviously never accepted the decision of the pope and of the German bishops.”

Cardinal Reinhard Marx, the president of the German Bishops' Conference, had himself stated in May 2014 that the employees of the organization Donum Vitae should “not be excluded from the Catholic Church,” that the discussion should not now “be instrumentalized for other purposes,” and that the German bishops will still continue their discussions with Donum Vitae. The new president of the ZdK, Thomas Sternberg, by now making his own statement in defense of Donum Vitae, might well hope that in the future there will be a softening attitude toward Donum Vitae on the part of the German bishops themselves, collectively and individually.