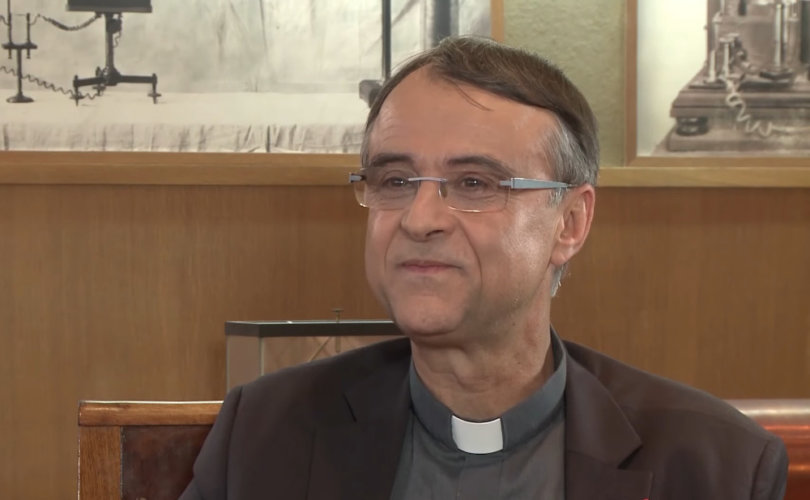 (LifeSiteNews) — Weeks after taking up his post as new president of the former John Paul II Institute for Marriage and Family, Monsignor Philippe Bordeyne made a remarkable statement in a revealing interview with La Croix International, the English-language daily edited by La Croix, unofficial daily of the French episcopate, saying, “We theologians cannot continue to assert certainties about the family when we see the transformations it is undergoing today.”

What are “certainties” about the family seen from the Catholic point of view? They are definitions, rules of life. They are reflections based on the natural realities and aims of marriage, and the natural laws that govern it. They are the result of the scrutiny of the revelation that tells of God’s plan for mankind, of the supernatural objective of procreation, which is to people God’s heaven with saints, and of the nature and value of sacramental marriage, which is a reflection of Jesus’ love for the Church.

When St. John Paul II founded the Pontifical Institute for Studies on Marriage and the Family, it was clearly and profoundly attached to traditional Catholic doctrine on marriage, acknowledging the existence of absolute moral norms that are always binding and prohibit intrinsically evil acts. Such were the “certainties” mentioned above – and the fact that they were certainties did not make them uninteresting or rigid in the sense that they could not account for new realities of the day.

On the contrary, they were the principles, the supporting walls on which the Church could build in order to assess modernity and, if necessary, challenge it with the help of faith and reason – as it did, for instance, with gender ideology, which is a radical negation of the rules of God’s creation.

When Bordeyne states that “We theologians cannot continue to assert certainties about the family when we see the transformations it is undergoing today,” he is saying in substance that there is no sure ground from which to assess these transformations, and if need be, to condemn them and to show that they are not in accordance with man’s true needs and calling.

His declaration shows that as a hand-picked new president of what is now the John Paul II Pontifical Theological Institute for Marriage and Family Sciences,” Bordeyne is fully on board with the revolution that is taking place there. It started with the sudden dismissal of the Institute’s head, Monsignor Livio Melina, a faithful successor of its founder, Cardinal Carlo Caffarra, in 2019. At the same time, all of the Institute’s professors were suspended – not all returned – and under its new Chancellor, Archbishop Vincenzo Paglia of homoerotic fresco fame, the door was opened to criticism of Humanae vitae that condemns contraception and to the glorification of Amoris Laetitia, in which Pope Francis discreetly welcomed certain divorced and civilly remarried couples to receive the sacraments, including Holy Communion, without intending to change their way of life.

Bordeyne was the rector of the French capital’s famed Catholic University, L’Institut catholique de Paris, for 10 years. His specialty is moral theology (without “certainties”?). He was an “expert” at the second Synod on the Family named by Pope Francis. He has co-authored a book with one of Jorge Bergoglio’s most influential Argentinian mentors, Father Juan Carlos Scannone, who adapted “theology of the people” from Liberation theology: Divorcés remariés : ce qui change avec François (“The Divorced and Remarried, what is changing with Francis”) – is all about “discernment” and “accompanying complicated situations” even unto reception of Holy Communion.

Bordeyne has spoken in favor of a “private blessing” for homosexual pairs and suggested that “human sexuality, which is ultimately not very determined, allows for atypical forms and expressions.” He has also stated that couples could be left to decide about using contraception or not and that they could accompany that decision by “redoubling their mutual love.”

Now that he has taken up his new position at the head of an Institute whose original aim was to uphold the Church’s traditional teachings on marriage and the family, Bordeyne appears not to have been touched by grace … At 61, he can be expected to hold onto his particular ideology, which is founded on the idea that we are in an “era of change,” as he told Loup Besmond de Senneville in the interview, especially with the “pandemic,” in which “the family” is one of the “new frontiers” where theologians must go.

“We are in a moment that is a bit similar to what John F. Kennedy experienced in 1960, when he won the Democratic nomination. At that time, he saw no choice but to take on board a world that had changed at great speed. Similarly, I believe that we are in a similar era of change today. And it is because our times are changing so rapidly that the Church must be more humble before the mystery of the family,” he said.

Asked whether the Church is not already humble enough, Bordeyne replied that it “has not always been humble enough to recognize that there are important changes in the way families are formed.” “This is what Pope Francis keeps repeating, especially in the exhortation Amoris laetitia (…) This lack of humility, in my opinion, is reflected in the temptation to oversimplify issues surrounding the family and to give ready-made answers. We theologians cannot continue to assert certainties about the family when we see the transformations it is undergoing today,” he added.

What are today’s transformations? Cohabitation before or without marriage, the explosion of the number of births out of wedlock in Western countries, widespread divorce, the denaturation of marriage itself, which is presented as possibly uniting two men or two women, widespread refusal of procreation, sexual promiscuity promoted by the media and many states.

Without saying all these trends are good, Bordeyne said, “Theologians are researchers, and therefore they draw on the light of tradition, but also on the strength of kerygma, which is the proclamation of Christ alive to families today” and that it is necessary to “deepen the way Jesus would look at complex situations, or the slowness of young people to choose marriage,” adding that the Church “cannot hide its eyes from the societal transformations we are witnessing.” As if it ever did.

It seems as if Bordeyne is lamenting the fact that the Church is not changing its language and priorities in the face of these “societal transformations.”

He also proclaimed that he does not have the intention of turning the John Paul II Institute into the “Amoris Laetitia Institute,” protesting that “the teaching of Francis is not reduced to Amoris laetitia, and that of John Paul II is not reduced to Familiaris Consortio. Each is well within its time, but there is no contradiction between the two.”

This is truly the official narrative on Pope Francis’ innovations: It is the search to implement change while proclaiming that expressions of Catholic doctrine that are clearly modified through such change are in fact acceptable “evolutions” dictated by changed circumstances.