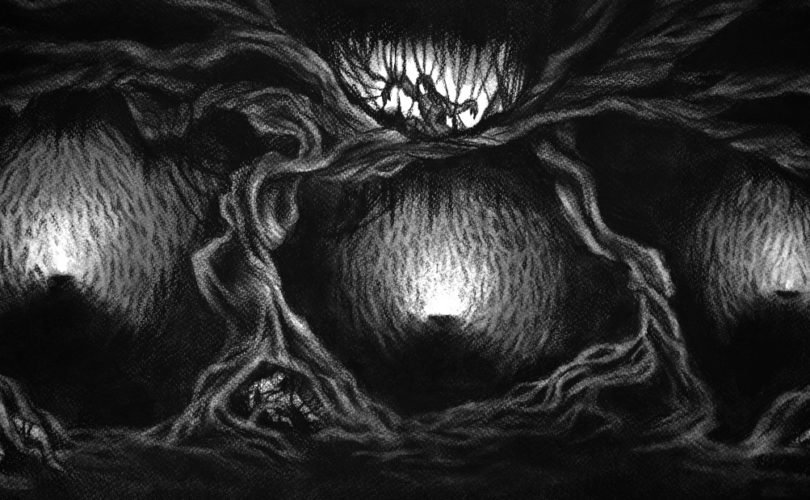 LOS ANGELES, February 18, 2016 (LifeSiteNews) – A young Catholic filmmaker is working to battle the damage radical feminism has exacted on society, and his new project calls men to take masculinity back.

The Bound is a short adaptation of a full-length feature film that combines spiritual warfare, biological horror, and medieval romanticism to issue what writer and director Paul Roland Bois says is a war cry for men to stand up against radical feminists prejudiced against men and authentic femininity.

Much of The Bound explores the horrific consequences of the feminization of men in society since the rise of feminism, Bois told LifeSiteNews, and what men must do to fight their way out of it.

“Essentially, men need to be reminded they were created to sacrifice and die for the sake of truth, beauty, and order,” Bois said. “They need to believe in their own heroism for the sake of defending good, dying for it if necessary. If men don't order their lives towards that, then evil will continue to flourish.”

Bois told LifeSiteNews his complaint isn't so much that the feminization of men has made them passive punching bags. Rather, it's that men who have fallen victim to feminization have become docile to Truth.

“They lose their hunger [to] fight for the Truth,” he stated. “They're all liberals, obsessed with material goods, obsessed with social justice and the wealth of other people, completely detached from fighting against real social evils like abortion and euthanasia.”

In his job as a staff writer for the conservative website TruthRevolt since 2013, Bois has covered the writings of modern misandrists (a person who dislikes, despises, or is strongly prejudiced against men) who self-identify under the feminist label and found their writings “some of the most misanthropic, mean-spirited, wicked pieces of prose out there in the mainstream media.”

“I do not refer to these women as 'feminists', because they hate all things feminine,” Bois said. “They sneer at motherhood, resent beauty, eschew chastity, and spit on modesty. They are akin to a schoolgirl cackling in amusement while kicking a boy in the groin.”

Whatever the goals or intent of second-wave feminism when it fundamentally transformed society throughout the '60s and '70s, Bois said, The Bound takes neither them nor domestic gender roles on.

“The Bound addresses modern feminism as an ideology and its cataclysmic effect on masculinity and natural law,” Bois said. “Whatever it began as, feminism has now morphed into one of the most mean-spirited ideologies being pressed upon the masses today.”

As a devout Catholic, Bois said the Catholic faith informs his work as a storyteller in the same sense that it informed Lord of the Rings author JRR Tolkien.

“I seek to tell an archetypal story whose themes, characters, and ideas are shaped by the Church's teachings, whether that be the writings of St. Thomas Aquinas or modern philosophers like Dr. Peter Kreeft,” said Bois. “I don't seek to tell a Catholic story; I seek to tell a story that is Catholic.”

Though this particular work is more overtly Catholic in terms of mechanics than other fictional stories of his, Bois said the heart of the film is more about the degradation of masculine and feminine as universal cosmic principles than it is about the importance of prayer and religious observance.

Despite The Bound being in the action/horror genre, Bois said he is a hopeful storyteller.

“As a Catholic, I kind of have to be,” he told LifeSiteNews. “That being said, I draw my inspiration from the immense darkness I see at the heart of Western culture in this day and age.”

“It's a wicked, brutal scene with wicked, brutal enemies,” he continued. “I feel the horror genre offers the only proper lens to view it accurately, because frankly, this culture is a horror film.”

Bois points out that the horror genre became increasingly popular with the onset of the sexual revolution, reaching its apex with the slasher films of the '80s, he said.

“I think there's something to that, the modern horror genre is our reflection upon the anxieties and stress we feel by living so far outside natural law in terms of sexual reproduction,” said Bois, “our subconscious guilt of knowing our careless pursuit of carnal pleasures carries with it a deadly consequence. The Bound easily falls into that category.”

Bois has been studying film since high school and through college and has directed in various media. Since graduating college in 2014, he's focused on honing his craft as a screenwriter, with The Bound marking his first ever professional short film.

He has an Indiegogo campaign in progress to fund the short adaptation of The Bound, with the goal of creating a powerful short film that excites audiences, and then using that momentum to push The Bound as a feature film. The campaign runs through March 2.

The film is the story of a veteran knight and his squire who, during a journey to Rome on pilgrimage to Rome, get pulled into spiritual and terrestrial warfare against a wicked demoness in the woods of medieval France.

Bois's villain is cat-like Masandra, known by exorcists in the story as “the maiden of Satan's princesses,” who embodies demonic possession via supernatural possession of the terrestrial, which she uses for control.

To defend herself, Masandra kidnaps men from local villages and binds their bodies with demonically possessed twigs and vines, complete with a wooden cage-mask that hooks a tail of thorn staples into their spinal cord. They are her army of “The Bound Ones.”

“Hey, female demon infecting nature and enslaving chivalrous knights – this sounds like the perfect vehicle to address modern feminism,” Bois said of his vision of the character.

“Masandra feels an intrinsic jealousy towards matter and creation and wants to insert herself inside it and create it into something else,” Bois said. “She sees herself as a creator, but since she can't create anything, she has to take the already created and devolve them into something ugly and grotesque.”

“I liken this to modern feminists, who destroy godly creations like family, children, monogamy, masculinity, femininity, beauty, and then act like they created something,” he continued. “They create pain and sorrow, and then call it something beautiful.”

Bois acknowledged that his premise is provocative, but no more than is necessary. He said he is sending a message to Catholics and conservatives that they can create the culture they want if they put the effort forward.

Bois posed the question, “If this campaign is successful, and I make the quality short film I know The Bound can be, who's to say we can't crowdfund our way to a feature film without going to a single Hollywood executive?”

“I want to shake people up, and yeah, I want feminists to hopefully see themselves in the character Masandra and maybe wake them[selves] up to the evil they promote,” Bois said. “Catholics can't go one minute without feminists holding a mirror up to us. I think it's time we turn it back around on them.”

When he began shooting a film on a pastor saving disabled babies, he had no idea God was planning to save him

Coming to theatres this April: a film that actually supports fatherhood