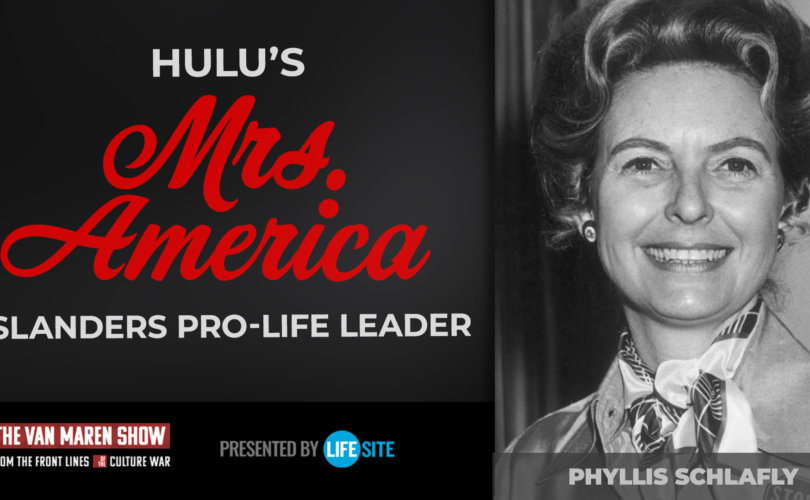 April 29, 2020 (LifeSiteNews) – Hulu has just launched a new mini-series called Mrs. America, but it isn’t about the beauty pageant. This new series is about Phyllis Schlafly, the woman who started a movement that stopped the passage of the Equal Rights Amendment of the 1970s.

Phyllis Schlafly was a pro-life, pro-family mother of six children who educated and rallied communities to stop the imminent passage of the misleadingly named Equal Rights Amendment (ERA). Sadly, the Hulu mini-series portrays her as a mean, ruthless woman whose marriage was struggling and who would do anything to stop the passage of the ERA.

In this week’s episode of The Van Maren Show, Schlafly’s daughter joins Jonathon to set the record straight. Anne Schlafly Cori highlights the smearing of her mother in Mrs. America and shares the wonderful, selfless things Phyllis accomplished in her life, including helping elect Ronald Reagan.

Phyllis Schlafly is truly a pro-family hero who made a distinct impact on American politics. Phyllis was called one of the top most 100 influential women in America by Forbes and she is mentioned in Ronald Reagan’s diaries. She essentially created the pro-family movement in 1972, and she successfully blocked the passage of the ERA. She held tremendous influence over the American political landscape for decades.

When Phyllis read the Equal Rights Amendment of the 1970s – which stated that “equality” of rights under the law “shall not be denied or abridged on account of sex,” she realized this would apply to the military as well and thus allow women to be drafted. She saw this as a threat to the stability and strength of the military.

Despite being up against incredible odds, Phyllis knew she needed to fight the passage of this amendment. The amendment had already passed a supermajority in Congress and was on its way to being ratified by the states when Phyllis started fighting, but that didn’t deter her.

Phyllis took the fight to the ground and educated people and encouraged them to go meet with their local representative to express their displeasure with the amendment. Phyllis started a phone tree where she called 10 people. Each of those 10 people called another 10 people, and so on. Each caller helped to educate the next about the actual implications of the ERA.

Phyllis’ key argument focused on the military, but in many cases, Phyllis only needed to use the ERA advocates’ words against them. She had the National Organization for Women's Handbook to show people how crazy their ideas were.

Through Phyllis’ work, the ERA was defeated. The deadline for passing the amendment was extended, but it still failed to pass as five states rescinded their support and others voted against the amendment.

Phyllis’ daughter Anne Schlafly Cori points to her strong faith life as the foundation for all of her work. Cori tells listeners “it was her faith that formed all of her political beliefs,” not a thirst for power as the new Hulu series would have viewers believe.

It was Phyllis’ faith that lead her to fight against the ERA and then against abortion as well. At the time, it was mainly only Catholics who were against abortion, but Phyllis was able to inspire and unite people of various religions around the same moral cause: the value of life.

Through Phyllis’ work, the GOP party went from having very few pro-life leaders to becoming the pro-life party in America.

Sadly, the new Hulu mini-series, portrays Phyllis and the Schlafly’s as a dysfunctional, power-hungry family.

Cori shares the great relationship her parents and family had growing up. Cori was the youngest of six children and she said her parents mutually adored each other. The letters written between them prior to their marriage show this in great detail.

The mini-series, however, paints Phyllis as an awful mother and showcases her father as a mean, vindictive man. Cori tells listeners this couldn’t be farther from the truth. She reminisces about her mother’s office, which was at home and had no doors. She was able to learn from her mother’s conversations and interactions much more than she did at school.

The directors of Mrs. America refused to consult with Donald Critchlow, the historian who wrote a book on Phyllis Schlafly. They even refused to speak with Cori or any of her siblings.

Cori didn’t have great hopes about the series, but she was surprised the series attacks almost anyone with whom her mother was close.

“I knew they were going to go after her. What shocked me is that how many of her supporters and her family they go after and malign not only my father, but my father's sister and some of the women who worked with my mother.”