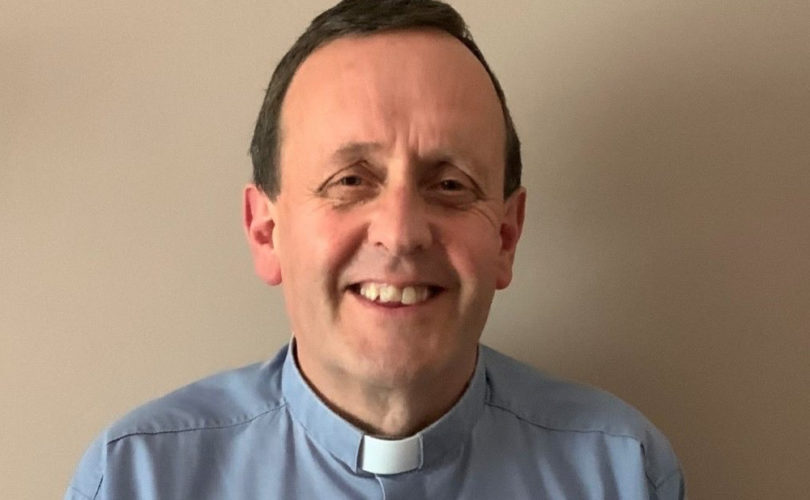 DUBLIN, Ireland, June 25, 2021 (LifeSiteNews) — The recently appointed bishop of the Diocese of Ferns in the south-west of Ireland has caused controversy after he expressed his support for female priests, before later performing an about-face on the matter.

Fr. Gerard Nash, aged 62, was appointed by Pope Francis as Bishop of Ferns on June 11, following the resignation of the current incumbent, Bishop Dennis Brennan. Nash was ordained in 1991 for the Diocese of Killaloe, after studying at Ireland’s Maynooth seminary. After spending five years as a school chaplain, and some six years in parishes, he became diocesan secretary in 2010, and in 2016 was made the Director of Pastoral Development for the Killaloe diocese.

Just days after his episcopal appointment was made public, Fr. Nash gave an interview to local news outlet Clare Champion on June 19, in which he appeared to lend his support to women being ordained as priests in the Catholic Church.

“When is that going to happen I don’t know. I am in favour of this,” stated Nash. “Most of the Irish Bishops are on record as striving to make ministry as inclusive as it should be. I think the idea of ministry and governance of the church being entirely male is completely wrong. I will be advocating for change. We must move forward.”

Bishop-elect Nash continued by expressing his regret that “ministry” was being confined only to priests, when it should be opened to the wider Church in view of the “ministry” which many do on a daily basis.

Ireland’s Papal Nuncio, Archbishop Jude Thaddeus Okolo, reportedly confided to Bishop-elect Nash that his long experience in pastoral planning was something which Pope Francis wished to see put forward in other dioceses in the country.

Unsurprisingly, the comments from the incoming bishop created controversy, and led Fr. Nash to issue a follow-up statement to The Irish Catholic. Nash stated that he “fully accepts” that female ordination is “not in our Church,” adding that in his interview to the Clare Champion he was not “as clear as I should be on that.”

“It’s way outside my area of competence all together,” continued Fr. Nash. “I suppose what I was coming at there, the work I’ve done over the past few years is supporting women in ministry. You know, those roles — to get roles for men and women, to develop a whole sense of room for women to minister within the Church. Ordination is a separate issue which is not in our Church and I fully accept that.”

Bishop-elect Nash is not alone in his at least initial support for opening the clerical state to women. Another recent appointee of Pope Francis, the new Archbishop of Dublin, Dermot Farrell, also expressed his wish to see women as part of the clergy. In a January interview, Farrell was somewhat more reticent about the possibility of women priests, saying that the “biggest barrier” was tradition, which was a “hurdle that has to be overcome.”

However, he was far more forthcoming about female deacons, declaring, “Would I like to see women deacons[?] I would.” Farrell further revealed his willingness to see married priests in the Church, noting that while celibacy was “important,” there should be a “choice on celibacy.”

Farrell himself would have crossed paths with Fr. Nash at Maynooth, as Farrell lectured there in moral theology in 1989, and was then made executive assistant to then-president Fr. Micheál Ledwith in 1990.

The Catholic Church teaches that women cannot be admitted to holy orders, whether as deacons, priests, or bishops. Pope John Paul II solemnly declared in his 1994 Apostolic Letter Ordinatio Sacerdotalis: “Wherefore, in order that all doubt may be removed regarding a matter of great importance, a matter which pertains to the Church’s divine constitution itself, in virtue of my ministry of confirming the brethren, I declare that the Church has no authority whatsoever to confer priestly ordination on women and that this judgment is to be definitively held by all the Church’s faithful.”

The Polish Pope also quoted from Pope Paul VI’s 1975 letter to the Anglican Archbishop of Canterbury, in which the Pope wrote that “the exclusion of women from the priesthood is in accordance with God’s plan for his Church.”

More recently, Cardinal Gerhard Müller, the former Prefect of the Congregation for the Doctrine of the Faith, spoke with LifeSite’s Maike Hickson about the issue of female ordination, issuing a categorical clarification about the Catholic prohibition on the matter of women as priests, or even deacons.

“It is certain without doubt, however, that this definitive decision from Pope John Paul II is indeed a dogma of the Faith of the Catholic Church and that this was of course the case already before this Pope defined this truth as contained in Revelation in the year 1994. The impossibility that a woman validly receives the Sacrament of Holy Orders in each of the three degrees is a truth contained in Revelation and it is thus infallibly confirmed by the Church’s Magisterium and presented as to be believed.”

The Irish bishops’ conference is currently proceeding with a synodal path, which will lead to a National Synodal Assembly within the next five years. They have been supported in this by Cardinal Mario Grech, the General Secretary of the Vatican’s Synod of Bishops. A task force will be established, comprised of lay and clerical members, to address the issues under consideration, one of which is “Honouring the Contribution of Women.”

The Spring 2021 meeting of the Irish bishops noted that the synodal path needed to “formally recognise their [women’s] roles and articulate new models of co-responsibility and leadership involving all lay people — women and men.”

Both Bishop-elect Nash and Archbishop Farrell have come out in support of the Irish synodal path. In a recent address in Enniscorthy cathedral, Nash welcomed the process, saying “we are at a turning point in our Church story in Ireland, and it is exciting to be asked to take a leadership role at such a time.”

Farrell himself welcomed the process of synodality, mentioning that a synod was only one point in the journey envisaged by Pope Francis.

The Irish bishop’s synodal path will coincide with the Vatican’s multi-year synod on synodality, an unprecedented kind of event. The bishops of the world will meet in Rome this October, and then hold six months of meetings at the diocesan level, next at the national level, and then at the continental level. These gatherings will canvass the opinions of religious communities, lay associations, and Catholic universities. The bishops will then meet again in Rome in October 2023, for the Ordinary General Assembly of the Synod of Bishops.