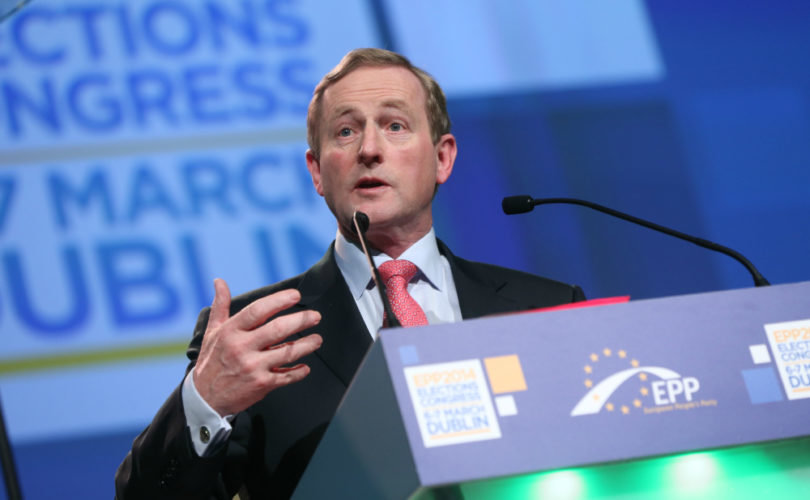 DUBLIN, May 10, 2016 (LifeSiteNews) – Newly-re-elected Irish Prime Minister Enda Kenny has passed on the potentially divisive issue of amending the country’s near-ban on abortion to a “citizens assembly” that will draft legislation for the Dail, or Parliament, to vote on.

But Niamh Ui Bhriain, spokesman for the Life Institute, said the Irish people are far more concerned with the economy and housing issues, and pointed to an exhaustive exit poll conducted by RTE, the national broadcaster, on the day of the general election. “Where do Fine Gael’s priorities lie?” she asked in a statement, referring to Kenny’s party. “With the people or with the extremist abortion campaigners who treat human life—and women hurt by abortion—like trash?”

The citizens assembly is only one sign from the recent general election that Ireland is no longer, as Pope Paul VI called it, “the most Catholic country in the world.” Another is Kenny’s choice for minister of children and youth: Katherine Zappone. She is an American feminist theologian, a lesbian and a strong proponent for same-sex “marriage” in last year’s referendum. Zappone married her own partner of 35 years, an Irish ex-nun, in Canada in 2003. The couple have lived in Ireland for 25 years.

The plan for a citizen’s assembly is part of the Programme for Partnership negotiated over several weeks between Kenny’s Fine Gael Party and the Fianna Fail. After ruling with the support of the pro-abortion Labour Party for five years, Fine Gael came out only slightly ahead of the resurgent Fianna Fail, returning 50 members to the Dail Eireann or lower house, to other parties' 43. Both centrist parties came out well ahead of Sinn Fein and Labour.

Fianna Fail has agreed to support Fine Gael through at least three budgets, or at least to not vote against Fine Gael in confidence motions. The price was a compromise platform whose major components address the price of water and the chronic housing and homelessness crisis.

But the abortion issue has been pushed by Amnesty International and taken up by the major news media as well as some ministers in Kenny’s last government. The National Women’s Council claims 59 members of the 135-member house are for relaxing the Eighth Amendment in Ireland’s constitution, which gives the unborn child equal protection under the law to that of the mother.

Several independents wanted the issue resolved directly by the Dail Eireann, and would not otherwise agree to support the government (against Labour and Sinn Fein). The government, however, stuck to the citizens assembly. If and when the as-yet unformed assembly produces a bill, both Fianna Fail and Fine Gael will allow their caucus to vote as they please.

Amnesty International cites recent polling as evidence that the Irish urgently want the removal of Eighth Amendment, which effectively bans abortion unless the woman’s life is at risk. Conducted in March by Red C for Amnesty, the poll reported that “the overwhelming majority” of those surveyed (87%) want access to abortion expanded, with 69% wanting it to be one of the new government’s priorities.

Claimed Colm O’Gorman, executive director of Amnesty International Ireland: “People in Ireland are clear and solid in their support of increased access to abortion.”

But Niamh Ui Bhriain points to RTE’s exit polling, which shows abortion barely registering in voters’ priorities–as eleventh most important. It was a priority with only two percent of those polled, far behind health care (cited by 20%), management of the economy (18%), stable government (9%), and water (8%).

“One RTE exit poll showed that this issue was a priority for 1% of voters, yet is being pushed onto the table by individuals who have an obsession with abortion, not by any real public interest,” said Uí Bhriain. “Our maternity units cannot cope with the lack of resources under their watch, yet Fine Gael is happy up the formation of a new government , and lose the support of independent, in order to remove the protection for unborn babies.”