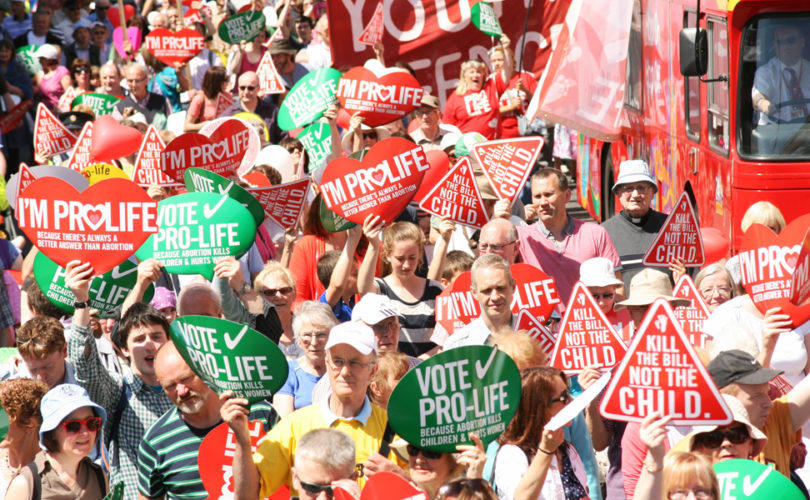 Tens of thousands of Irish citizens join a Rally for Life in Dublin on July 13, 2013.Courtesy of The Life Institute

DUBLIN — New guidelines on abortion set to be issued by Ireland’s Department of Health seem to be silent on the reality of what Fine Gael's abortion legislation meant for mothers and babies, says the pro-life Life Institute.

The Irish Times reported Thursday that the guidelines laid out when an abortion could be carried out in response to a threat of suicide. As expected, the abortion law will allow a baby's life to be ended if doctors certify that a woman is suicidal and that risk “can only be averted by the termination of her pregnancy.”

As also expected, no term limits were contained in the guidelines, leaving open the possibility of abortion until birth, despite the Constitutional provision that doctors have due regard for the right to life of the child.

“We heard endless calls for clarity last year in regard to abortion and medical treatments when the abortion bill was being pushed through the Dail and Seanad,” said Niamh Uí Bhriain of the Life Institute. “Yet any debate on the reality of what this abortion act would bring about was always shouted down by the government and their allies in the media.”

“Where is the clarity in these guidelines in relation to protecting mothers and babies? The reality is that this legislation allows for abortion until birth, yet when the question of late term abortion was raised in the Dail during the debate last year, this reality was ignored.”

Uí Bhriain said that the success of the recent “Vote Pro-Life” initiative showed that the Irish people had not forgotten, nor would forget, what the government had done to push through abortion despite major public opposition.

Claire Molloy of Youth Defence said Enda Kenny had bullied and persuaded politicians to support the Abortion Act by insisting it was restrictive and would not result in abortions taking place. The guidelines proved otherwise, she said.

“This legislation flew in the face of the best medical evidence which showed that abortion was not a treatment for suicidality arising in pregnancy, and will result in a failure to achieve best medical practise, yet the guidelines clearly implement all the grievous and deadly flaws in the abortion act,” she said.

“The guidelines are a long time being published, because the government understands this is a contentious issue, and are afraid to spell out the reality if what their act entails – including the particularly dreadful horror of late-term abortion,” said the Youth Defence spokeswoman.